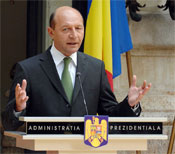 On Wednesday, during his meeting with ambassadors to Bucharest, Traian Basescu stated that supporting Republic of Moldova in term of accession to European Union is a “dear project” of Romania.

He specified that he would make his first visit as a head of state to Chisinau in one week.

Post Views: 151
Previous Swedish embassy in Sofia to close
Next The President of the European Court of Human Rights may visit Republic of Moldova