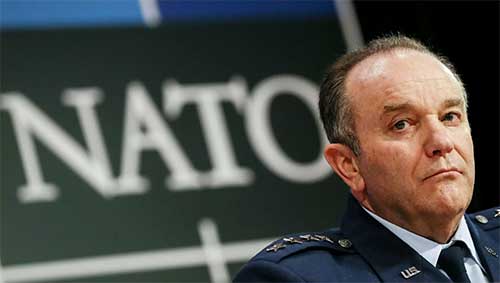 NATO demanded March 11 that the OSCE be given full access to verify the withdrawal of heavy weapons in eastern Ukraine and called again on Russia to end support for the separatists.
The condition that both Ukraine and pro-Russian rebel forces pull back heavy weapons is a key element in a February 12 Minsk ceasefire accord brokered by France and Germany with Kyiv and Moscow which the OSCE is meant to monitor.
“We have seen some withdrawal but it is unclear what their destination is. It is important that this withdrawal of heavy weapons is verifiable,” NATO head Jens Stoltenberg told a briefing alongside NATO Supreme Commander General Philip Breedlove.
“The key (issue) is that monitoring of the ceasefire is improved and therefore we have to increase support for the OSCE, to ensure they have freedom of movement,” he said, adding that this was essential to full implementation of the Minsk accord.
Breedlove said NATO was uncertain of the numbers involved from the start, making it difficult now to determine what was really happening.
“It is hard to tell. The good news is that we have seen movement of heavy weapons and troops from near the line of contact but we cannot say where they have gone,” he said.

Post Views: 183
Previous Kerry calls for updated US war powers to fight IS
Next Egyptian checkpoint attacked by Islamic militants in north Sinai