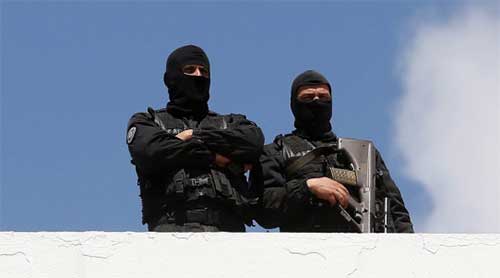 The elimination of 25 terrorists in Bouira (122-km east of Algiers) was a “daring operation” and a “quality leap” reflecting the capacity of the People’s National Army and the security forces in the eradication of terrorist groups, said Thursday in Algiers the Minister of State, Minister of Foreign Affairs and International Cooperation, Ramtane Lamamra.
The observers deem, quite rightly, that what has been achieved is a “quality leap,” Lamamra told the press at the end of his discussions with the Speaker of Serbian Parliament, Maja Gojkovic, adding that “there remain only remnants of terrorism in Algeria.”
The minister hailed the capacity of the Army and the security forces to eradicate these (terrorist) groups, adding that “this confirms more than ever that Algeria is a pioneer in the fight against terrorism.”
“The whole world is now convinced that there are pioneer countries in the fight against terrorism and Algeria is the leading country,” stressed Lamamra.
Such operations “require the mobilization of special forces,” he said, adding that the Algerian citizens “are participating, in their own way, in the action aiming at ending the scourge of terrorism in Algeria.”