FROM SYKES-PICOT TO OBAMA-PUTIN: POWER ACTORS IN THE MIDDLE EAST AND NORTH AFRICA 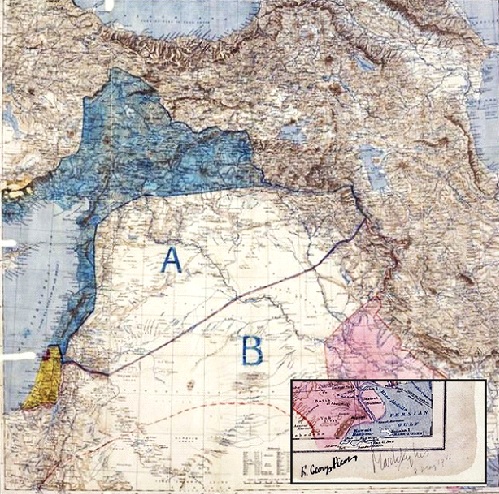 The map signed by Sykes and Picot
Source: BBC
The map of the Middle East as we know it now is largely the creation of France and Britain, the early 20th century’s colonial powers, as a result of the negotiations led by diplomats Sir Mark Sykes and François Georges Picot. Maps of the region prior to World War I have none of the countries that are at the heart of today’s war-torn Middle East. Today’s Iraq, Syria, Jordan, Lebanon and Yemen were created by the colonial powers after they carved up the Ottoman Empire.
While the “Sykes-Picot map” was the one that became reality at the end of World War I, it was not the first attempt of the Western powers to carve up the Turkish/Ottoman Empire.
(a) In a book published shortly before World War I and the Sykes-Picot agreement, Romanian diplomat Trandafir Djuvara counted no less than 100 projects – between 1281 and 1913 – aiming to split the Ottoman Empire and carve new borders in the Middle East, a process that became the still not solved “Middle East Question”. Starting with the Crusades and the attempts to conquer the Holy Land and followed by the projects to dismantle the Ottoman Empire and Turkey, such projects were generated, according to the Romanian diplomat, by the fact that the empire was founded on conquest and did not seek to integrate or assimilate its different populations.
Another aspect mentioned in the book was the observation of the 17th century French philosopher Montesquieu that the Turkish Empire was to resist because the European commercial powers would know their interests and will defend it.
(b) Also a century ago, the American President Woodrow Wilson sent a commission to the Middle East to explore what new nations should rise from the wreckage of the Ottoman Empire.
Under Ottoman rule, neither Syria nor Iraq existed as separate entities. Three Ottoman provinces (Baghdad, Basra and Mosul) roughly corresponded to today’s Iraq. Four others (Damascus, Beirut, Aleppo and Deir ez-Zor) included today’s Syria, Lebanon and much of Jordan and Palestine, as well as a large strip of southern Turkey. All were populated by a lot of different communities: Sunni and Shiite Arabs, Kurds, Turkomans and Christians in Iraq. In Syria, there were the same groups with also the Alawites and the Druze.
President Wilson’s commissioners, Henry King and Charles Crane, reported back their findings in August 1919. In Europe at the time, the breakup of the Austro-Hungarian and Russian empires was leading to the birth of new ethnic-based nation-states. But the U.S. officials advised Wilson to ignore the Middle East’s ethnic and religious differences. What is now Iraq, they suggested, should stay united because “the wisdom of a united country needs no argument in the case of Mesopotamia.” They also argued for a “greater Syria”, an area that would have included today’s Lebanon, Jordan, Israel and the Palestinian territories.
The end of Ottoman rule, King and Crane argued, “gives a great opportunity – not likely to return – to build… a Near East State on the modern basis of full religious liberty, deliberately including various religious faiths, and especially guarding the rights of minorities.” The locals, they added, “ought to do far better under a state on modern lines” than under Ottoman rule.
This was not to be the case. In Syria, the French colonial authorities, faced with a hostile Sunni majority, courted favor with the Alawites, a minority offshoot of Shiite Islam that had suffered discrimination under Ottoman rule. The French even briefly created a separate Alawite state on what is now Syria’s Mediterranean coast and heavily recruited Alawites into the new armed forces.
In Iraq, where Shiites make up the majority, the British administrators (faced with a Shiite revolt soon after their occupation began) played a similar game. The new administration disproportionately relied on the Sunni Arab minority, which had prospered under the Ottomans and now rallied around the new Sunni king of Iraq, whom Britain had imported from newly independent Hijaz, a former Ottoman province conquered by Saudi Arabia.
Colonial powers within the states created colonial administrations that educated, recruited and empowered minorities. When they left, they left the power in the hands of those minorities that became represented by dictatorships. The Assad family has ruled Syria since 1970; Saddam Hussein became president of Iraq in 1979. Notwithstanding their lofty rhetoric about a single Arab nation, both regimes turned their countries into places where the minority ruling communities (Alawites in Syria, Sunni Arabs in Iraq) were “more equal than others.” Attempts by the Sunni majority in Syria or the Shiite majority in Iraq to challenge these authoritarian orders were put down without mercy. In 1982, the Syrian regime bulldozed the largely Sunni city of Hama after an Islamist revolt, and Saddam crushed a Shiite uprising in southern Iraq after the Gulf War in 1991. 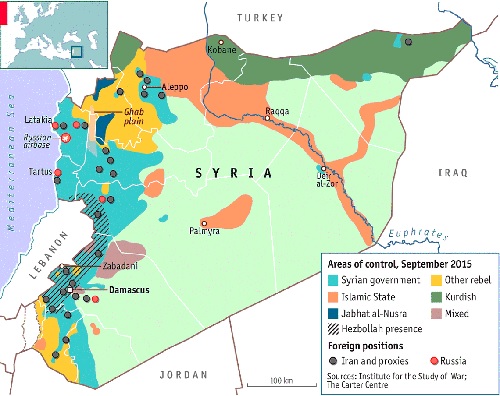 Syria situation map, September 2015
Source: The Economist
While the idea of dividing Syria was launched since the Syrian uprising in 2011, the concept is not easy and governments still oppose it given the repercussions for the countries in the region. However, there are many indications that a partition of Syria is the most likely future scenario. Iran and Hezbollah have withdrawn their forces from large parts of the north and south since the beginning of the year. They want to focus on defending the core region controlled by Assad, which they can hold, the densely populated strip from Damascus to Latakia.
If Assad escapes Damascus to Latakia or to Qardaha and decides to build his republic there, it will not guarantee international recognition. Moreover, it would trigger a civil war, which will follow Assad wherever he goes in Syria. Assad will be the target of all angry Syrians and he will not be capable of providing permanent international protection for his new state. The Alawites themselves will consider Assad a burden and will blame him for their disaster (most of the Alawite elites left the country to Europe and Gulf countries).
The gradual dissolution of Syria makes it difficult to find a solution for the entire country. Two other parties have already taken control of large portions of the country. In the north, troops with the Kurdish YPG (People’s Protection Units, the main armed service of the Kurdish Supreme Committee, the government of Syrian Kurdistan), the Syrian branch of the PKK, control the three traditionally Kurdish areas along the Turkish border. And even they consistently deny wanting to establish a Kurdish state, this is precisely what Western intelligence officials believe they intend to do. This is why the Turkish government is doing everything in its power to prevent the YPG from capturing more territory. Hezbollah, in turn, has captured a broad strip of land along the Lebanese border in a move that could disrupt the country’s delicate confessional balance.
A partition of Syria would probably be the biggest favor for Daesh. A Russian-Iranian protectorate in the west would stand in the way of any unification of the entire country, and it would mean abandoning the rest of the country to the “Caliph” Abu Bakr al-Baghdadi, who knows that the Syrian rebels alone cannot defeat Daesh.
Iraq: towards three states
The objective of dividing Iraq into three different state entities has been discussed as far back as 1982, when Israeli journalist Oded Yinon, wrote an article which was published in a journal of the World Zionist Organization, titled: “A Strategy for Israel in the Nineteen Eighties”. Yinon discusses the plan for a Greater Israel and pinpoints Iraq in particular as the major obstacle in the Middle East which threatens Israel’s expansion.
In the case of Iraq, fragmenting it into three separate regions has been talked about in the U.S. since the 2003 invasion of the country, although NATO member Turkey has vocally opposed the creation of a Kurdish state in the North. Also in 2003, the President Emeritus of the CFR, Leslie Gelb, argued in a 2003 article for the ‘New York Times’ that the most feasible outcome in Iraq would be a “three-state solution: Kurds in the north, Sunnis in the center and Shiites in the south.”
In 2006, a potential map of a future Middle East was released by Lieutenant-Colonel Ralph Peters which depicted Iraq divided into three regions: a Sunni Iraq to the West, an Arab Shiite State in the East and a Free Kurdistan in the North.

The West’s shifting
Frustration with Syria and alarm in Europe at the surge in refugees pounding at its gates, have produced an increased willingness among Western diplomats to soften their hostility to Mr. Assad’s regime. Even John Kerry, America’s secretary of state, said recently that, in a negotiated solution, the Syrian leader’s departure need not necessarily take place “on day one or month one or whatever”.
Russia’s embrace of the Syrian leader has accelerated this shift. Senior European diplomats, including Germany’s foreign minister, Frank-Walter Steinmeier, welcome Russian intervention. Israeli Prime Minister Binyamin Netanyahu paid a visit to Moscow, accompanied by his defense chief of staff, Lt. Gen. Gadi Eizenkot, and the head of military intelligence, Maj. Gen. Herzl Halevi, to seal protocols to ensure that there will be no unintended clashes between Israeli and Russian forces. Even Turkey’s president, Recep Tayyip Erdoğan, flew to Moscow on September 23rd for the inauguration of a new mosque, claimed as the largest in Europe.
The shifting position is also to be seen among the European Union leaders, with European Commission President Jean-Claude Juncker recently declaring that “Russia must be treated decently” and that Europe cannot let its “relationship with Russia be dictated by Washington.”
The pro-Moscow tilt has also triggered a shift to more pragmatic politics among rebel groups on the ground. After months of complex negotiations involving Iran and one rebel coalition, agreement has been reached for a ceasefire and population swap in two besieged zones. Some 29 rebel factions also signed an agreement in Istanbul in September endorsing a UN plan to set up four parallel working groups to seek practical solutions to Syria’s myriad woes.
Analysts also explain the recent developments in the Middle East as being favored by the vacuum created by Barack Obama’s attempt to stand back from the wars of the Muslim world. America’s president told the UN General Assembly that his country had learned it “cannot by itself impose stability on a foreign land”; others, Iran and Russia included, should help in Syria. Mr. Obama is not entirely wrong. But his proposition hides many dangers: that America throws up its hands; that regional powers, sensing American disengagement, will be sucked into a free-for-all; and that Russia’s intervention will make a bloody war bloodier still. While American intervention can indeed make a bad situation worse, America’s absence can make things even worse and, at some point, extremism will force the superpower to intervene anyway.
The risk of a Damascus – Baghdad – Tehran axis 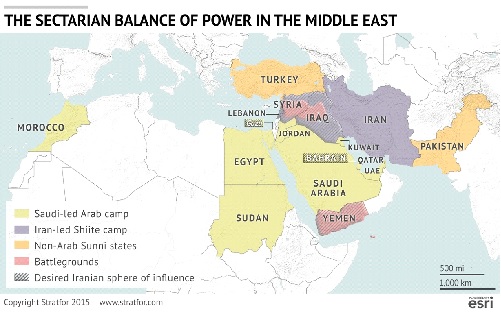 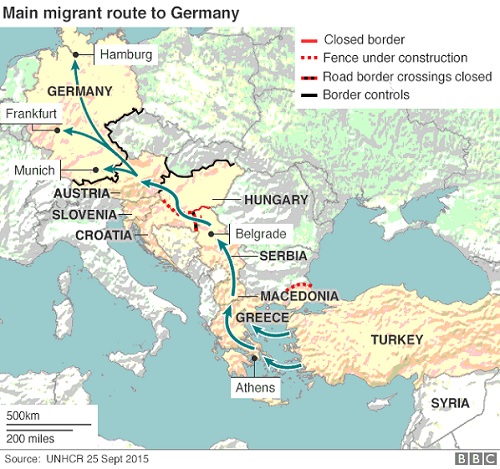