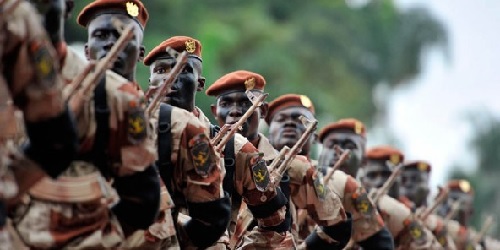 Warring parties in South Sudan are expanding stockpiles of weapons and ammunition in violation of an August peace deal and President Salva Kiir risks fueling violence with plans to almost triple the number of states in the country, said UN experts.
In a report to the UN Security Council, seen by Reuters on Wednesday, the experts said they were examining the flow of arms into South Sudan and had “credible, independent” reports that both the government and opposition were boosting their supplies.
The experts, who monitor UN sanctions on South Sudan, said they would provide details shortly. The 15-member Security Council warned in August it was ready to impose an arms embargo on the country if the peace agreement collapsed.
A political row between Kiir and his former deputy Riek Machar sparked civil war in late 2013 and reopened ethnic fault lines between Kiir’s Dinka and Machar’s Nuer people. More than 10 000 people have been killed.
Kiir and Machar signed the peace deal in August, but since then both sides have accused one another of attacks, and humanitarian groups have pulled out of parts of the oil-rich country where heavy violence has been reported.
The experts said both sides were “persistently failing to implement a permanent ceasefire and failing to agree meaningfully to security arrangements that are requisite for the establishment of the transitional national government”.
They also said Kiir had taken steps to “undermine the power-sharing formula” that underpins the peace deal by planning to increase the number of states in South Sudan to 28 from 10. The presidential decree is due to come into effect by mid-November.