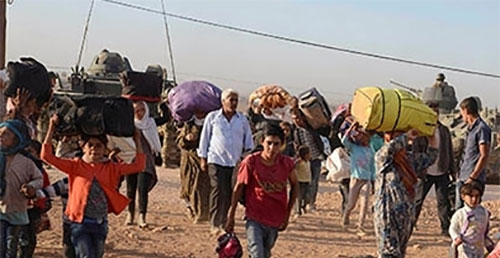 Algeria has called Thursday in Amman (Jordan) European countries to provide “efficient” assistance and support to address the impact of refugee crisis on host countries.
“Algeria calls neighbouring countries of the northern shore of the Mediterranean to financially assist host countries in addressing the consequences of humanitarian and environmental issues induced by refugees,” said senator (Council of the Nation) and vice chairman of the committee on energy, environment and water at the Parliamentary Assembly of the Union for the Mediterranean (PA-UfM) Ammar Makhloufi.
Speaking at a meeting of the committee themed “The impact of refugees on water, energy and infrastructure on host countries,” Makhloufi highlighted the major impact of refugees on the environment of host countries, including Algeria.
“Our European key partners should provide financial technical assistance to host countries to help them deal with such consequences,” he said.
The committee members “have found that there are not enough financial resources allocated under the AP-UfM to handle such situations,” he regretted, stressing that Algeria “advocates support from the member countries of the PA-UfM, which have sufficient financial resources, to host countries so that they can resolve humanitarian and social issues resulting from the presence of refugees on their territories.”
The Algerian representative, moreover, urged the governments of the Union for the Mediterranean to “take firm commitments to protect the Mediterranean basin which has become more and more closed and polluted.”

Post Views: 195
Previous US wants 'proof' of progress by Sudan's government on Darfur
Next Algeria satisfied by cooperation with France on regional issues