Algeria satisfied by cooperation with France on regional issues 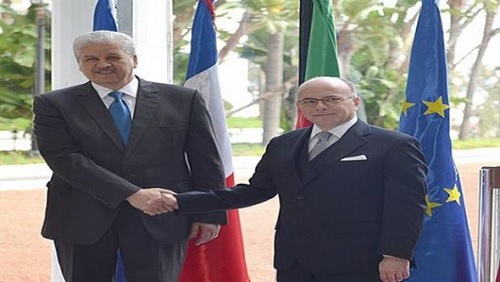 Prime Minister Abdelmalek Sellal expressed Thursday, in Algiers, his “satisfaction” with the quality of the Algerian-French cooperation on regional and international issues of common interest.
“Allow me to express my satisfaction with the quality of our cooperation on regional and international issues of common interest, including those relating to peace and security, notably in the fight against terrorism and violent extremism,” said Sellal during his discussions with French Minister Bernard Cazeneuve, who is on a working visit to Algeria.
In this regard, Sellal “strongly reiterated Algeria’s willingness to combine both countries’ efforts in order to deal with the many security challenges they face.”
He said that political dialogue between officials of the two countries “is so dense that it allows the coordination of views on certain international issues, particularly the threats that weigh heavily on the region.”
“We must more than ever increase vigilance and our mobilization at the national and the regional levels to face these challenges that destabilize many countries in our region, and are a serious threat to the security of our countries and our region, including its Euro-Mediterranean part,” he underlined.