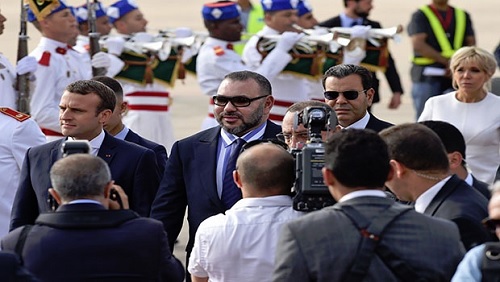 French President Emmanuel Macron was in Morocco on Wednesday on a 24-hour visit for talks on battling terrorism as well as the Libyan conflict and Qatar’s dispute with its Gulf neighbours.
As he stepped off the plane for his first visit to Morocco since his election in May, the French president, his wife Brigitte at his side, was welcomed on the tarmac by King Mohammed VI.
The king’s wife, Princess Lalla Salma, and Crown Prince Moulay Hassan, 14, were also present at the airport to greet the French first couple, who were then driven to the royal palace for an hour of talks.
At a press conference following the talks, Macron said both France and Morocco were keen on mediating a solution to the diplomatic crisis in the Gulf.
“The king of Morocco shares our concern: France would like to see the countries talking again and for the Gulf to remain stable, not least because these states are stakeholders in the crises in Syria and Libya,” he said.
“The king of Morocco has met with several of those involved, myself I have met all the leaders from the region,” Macron said, adding that he would meet a senior leader from the UAE in Paris next week.