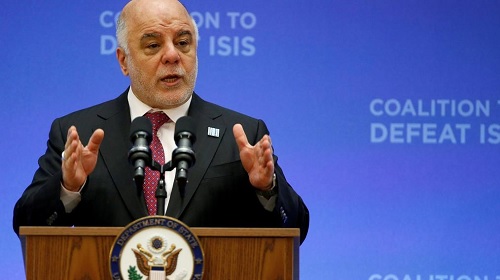 The Iraqi prime minister says the country is in its final stages of liberation from ISIL militants.
As Iraqi forces battled to push the extemists out of their last remaining pockets of territory, Haider al Abadi attributed the forthcoming victory over ISIL to iraqi unity and solidarity.
“Iraq was at a crossroads when ISIL entered using terror, the international community backed Iraq to prevent ISIL from spreading in the region,” Mr Al Abadi said.
Speaking on Wednesday during a meeting with Yahia Nasseri, governor of the southern Iraqi province of Dhi Qar, the prime minister said, “We are in the final stage of liberating our territories and we will continue to train our forces as terrorism still prevails [in parts of the country].”
The recapture of territory has progressed swiftly since Iraqi forces, with American backing, retook the city of Mosul in July. In August, the Iraqi military command overseeing the anti-ISIL operation declared victory in Tal Afar, west of Mosul and announced Hawija, 240 kilometres north of Baghdad, would be the next battle against the militants.
“By maintaining its unity and through the readiness of our people to sacrifice their lives and through the wisdom of religious authorities Iraq came out victorious,” Mr Al Abadi said.
Iraq has also carried out many economic reforms, after weathering a serious financial crisis. As a result, “the world has become confident in the Iraqi economy,” Mr Al Abadi said. “Today the country is stronger and is different than ever before and is considered a state of great importance in the world.”