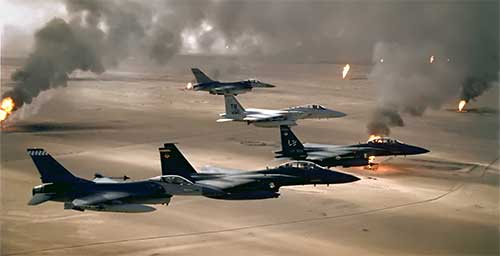 At least 14 Daesh terrorists were killed Tuesday in airstrikes carried out by a U.S.-led coalition in Iraq’s northern Kirkuk province, according to local security sources.
“An aircraft belonging to the international coalition targeted a Daesh bomb factory in Hawija’s Riyadh district​​ southwest of Kirkuk city,” Khalid al-Numan, a Kirkuk police officer said.
The airstrikes, he said, had left at least 14 Daesh militants dead.
“Intelligence sources from inside the targeted area also confirmed that dozens of other Daesh militants suffered injuries,” al-Numan added.
The U.S.-led coalition, for its part, has yet to comment on the reported airstrikes.
In a related development Tuesday, a Baghdad-based security source said that one Hashd al-Shaabi fighter had been killed in a bomb attack south of the capital.
“A Hashd al-Shaabi patrol came under attack Tuesday in the Arab Jabour district south of Baghdad, killing one fighter and injuring three others,” Baghdad Police Captain Nazhan al-Khader announced.

Post Views: 256
Previous Iraqi PM calls for unity in the final stages of liberation from ISIL
Next Afghan forces kill over 70 Taliban in eastern Nuristan