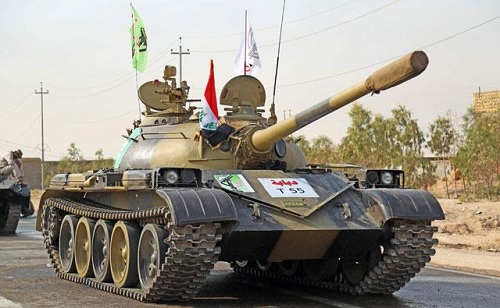 Iraqi armed forces on Saturday dislodged the Daesh terror group from a natural gas-rich border area with Syria, according to the military.
Iranian-backed forces fighting with Syrian President Bashar Assad’s army simultaneously announced the start of an offensive to reach the same border area from the opposite side.
An Iraqi military statement said Akashat, a desert region located south of the Euphrates River, was captured in an offensive which had been announced earlier in the day.
The attack on Akashat is meant to pave the way for the recapture of urban centres in the Euphrates valley, including the border post of Al Qaim, it said.
Iranian-backed Shiite paramilitary forces known as Popular Mobilisation and Sunni tribal fighters known as Tribal Mobilisation took part in the offensive, it added.
The Iraqi air force dropped thousands of leaflets overnight on Akashat as well as on Al Qaim and the towns of Ana and Rawa, alongside the Euphrates, telling the militants to surrender or face death, the statement said.