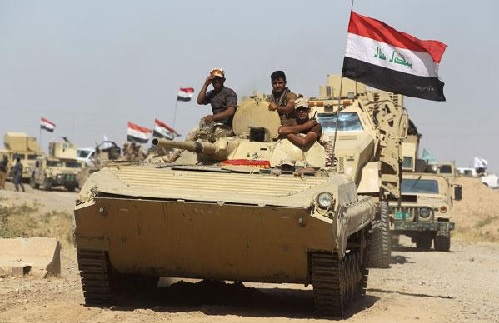 Iraqi forces and Shiite paramilitaries captured an airbase from the Daesh terror group on Monday, the army said, gaining a strategic foothold in the north of the country as they push towards the town of Hawija.
Iraq launched an offensive on September 21 to dislodge Daesh from Hawija, which lies west of the oil city of Kirkuk and is one of two areas of the country still under the control of the militant group.
Iraqi army commanders said the Rashad airbase, which is around 30 km south of Hawija, was used by the militants as a training camp and logistic base.
Militants took control of the air base after the Iraqi army collapsed in 2014 in the face of the Daesh offensive.
“After quick rehabilitation works, the airbase will play a key role for Iraqi forces by allowing helicopters to transport soldiers and arms in any future operation to maintain security in the north”, said army Lieutenant Colonel Salih Yaseen.
“The airbase will help to put an end to the terrorists’ pockets hiding in mountainous areas near Kirkuk and remove any possible threat to the energy facilities and oilfields.”
Hawija, north of Baghdad, and a stretch of land along the Syrian border, west of the Iraqi capital, are the last stretches of territory in Iraq still in the hands of Daesh.

Post Views: 303
Previous US-backed force scours Daesh ex-fort in Raqa
Next US could keep troops in Afghanistan for another decade