Algerian army seizes batch of weapons on border with Mali 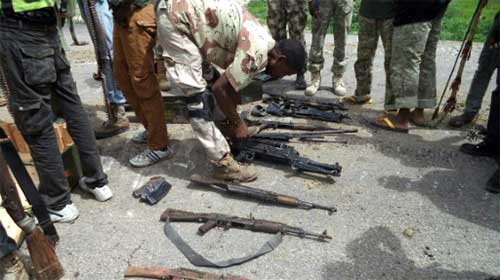 The Algerian army on Thursday discovered a large batch of weapons on the border with Mali, a statement from the defense ministry said.
The arms were hidden in a bunch in the locality of Bordj Badji Mokhtar in the southernmost province of Adrar, according to the statement.
The weapons consist of an FMPK machine gun, nine pistols, a Kalashnikov machine gun, an RPG-7 rocket launcher, four semi-automatic rifles, a repeating rifle and a large quantity of ammunition.
It is not the first time that the Algerian army has found weapon bunkers along the southern and southeastern borders.
Located in a region plagued by unprecedented security and political instability, Algeria faces constant terrorist threats.
The North African nation has deployed tens of thousands of troops on the eastern and southern border to thwart potential intrusion of militants and arms, amid instability gripping Mali and a civil war hitting Libya.

Post Views: 115
Previous Libya carries out operations in north region against IS
Next Syria retakes Albu Kamal stronghold from Daesh