ISIS has carried out two attacks on Iraqi border posts along the border with Syria following the US decision to suspend counter-ISIS missions in order to focus on protecting Iraqi bases and coalition forces amid tensions with Iran, according to a US defense official and Iraqi security officials.

On Monday night, ISIS militants carried out attacks on an Iraqi security border post near the Syrian border, killing one officer and wounding four others. An ISIS militant was also killed after Iraqi security forces clashed with them. ISIS used light weapons to attack the border post about 45 kilometers north of the al-Walid border crossing with Syria, Iraqi officials said.

On Sunday, a number of ISIS militants attempted to attack another security post near the Syrian border but fled the scene after Iraqi security forces fired back, the Iraqi security officials added.

“ISIS group is well known for exploiting the situation. We knew the group will take advantage of current tension between America and Iran,” Iraqi military Col. Shaker al-Raishawi said.
Al-Raishawi and another Iraqi security official told CNN from Anbar Province on Tuesday that ISIS has increased its activity in the border area.

The increased ISIS activity comes follows the escalation of tensions between the US and Iran that has led to the suspension of anti-ISIS operations. Iran fired a number of missiles at two Iraqi bases housing US troops last week in retaliation for the American strike that killed top Iranian general Qasem Soleimani earlier this month. No US or Iraqi forces were wounded in the attack.

The US assesses the attacks were likely carried out by ISIS in an early sign the remnants of the terror group believes it can take advantage of the unsettled situation and uncertainty over whether US troops will stay in Iraq, the US official said.

Earlier this month, the Iraqi Parliament voted to force the government to work toward the removal of US and other foreign troops from the country. The US-led military coalition fighting ISIS has announced that it was temporarily halting counter-ISIS missions in order to focus on protecting Iraqi bases and coalition forces there from Iranian-backed militias.
Citing the recent attacks by the Kataib Hezbollah militia, which have resulted in the deaths of a US civilian contractor and Iraqi security forces, the US-led coalition said: “We are now fully committed to protecting the Iraqi bases that host Coalition troops.”

“This has limited our capacity to conduct training with partners and to support their operations against Daesh and we have therefore paused these activities, subject to continuous review,” the coalition said in a statement, using the alternative name Daesh for ISIS.

“We remain resolute as partners of the Government of Iraq and the Iraqi people that have welcomed us into their country to help defeat ISIS. We remain ready to return our full attention and efforts back to our shared goal of ensuring the lasting defeat of Daesh,” the coalition said in its statement.
The separate NATO training mission in Iraq has also announced that it has suspended its efforts to train local security forces. 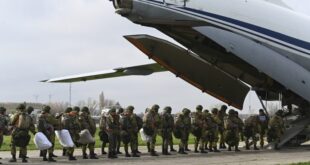 U.S. Calls Russian Military Activity Near Ukraine Cause For ‘A Lot Of Concern,’ As Kyiv Warns Moscow It Will ‘Fight Back’

The Islamic State has attacked the security forces in Iraqi Kurdistan in recent days. The …