Asylum seekers and migrants often encounter hostility on their way to the West – but in Timisoara those passing through are meeting a remarkable outpouring of solidarity.

On 26 November last year, people in Timisoara, a city in western Romania, were moved to find that 25 migrants who had recently entered the country illegally had spent the night in the street.

Overwhelmed by an influx of asylum seekers, the authorities had failed to find a facility where the migrants could follow the 14-day quarantine rule required of every visitor from “yellow” zones, so called because of their high incidence of COVID-19.

The 25 migrants from Afghanistan were following the “Balkan Migrant Route” to Western Europe and had reached Romania from Serbia, which had been added to the list of “yellow” countries five days earlier.

“We were heartbroken and quickly rallied to collect money to offer them food and hot drinks,” recalled Flavius Ilioni-Loga, coordinator of the LOGS-Group of Social Initiatives, an NGO working with refugees and migrants.

A social worker with a background in journalism, he approached the press and within hours the plight of these migrants was a hot issue in Romanian public conversation, forcing the authorities – which had been avoiding the problem – to come up with a solution.

They now placed the migrants in the empty dormitories of the state railway company’s vocational school before dispersing them to reception centres across the country until their applications for asylum had been resolved.

News of their plight also spread through a local Christian radio station, triggering an across-the-board civil society mobilization to provide them with food and water, clothes, blankets, medicines, treatment and toiletries.

“People were very touched and many contributed with donations or voluntary work – to cook for them and deliver the food,” said Alina Birgean, an English teacher who cooks for the migrants at the Baptist church in Timisoara.

The logistical challenge posed by Serbia’s inclusion to the “yellow” list signaled a situation that had been a reality for weeks: an increasing and unprecedented number of migrants, mostly from Afghanistan but also from Syria, Pakistan and Iran, were crossing into Romania from Serbia, where their westwards journey was being thwarted by systematic and sometimes violent police pushbacks at the border with EU member state Croatia.

Data provided by LOGS shows that more than 6,000 mostly Afghan migrants lodged asylum applications in Romania in 2020, a record in the country’s post-communist history. More than half of them arrived from Serbia in the last three months of 2020.

While a solution was found to accommodate the 25 during quarantine, the system remains overloaded. The reception centre has for days hosted twice its normal capacity of 250 and its budget does not provide enough money to feed asylum seekers daily.

For over two months, however, a charity plan of action run in coordination with private and public institutions by Ilioni-Loga makes sure all the migrants in Timisoara have something to eat and keep warm in the tough winter.

The action plan provides for the migrants staying for one or two days at a barracks inside the courtyard of the Border Police headquarters, as well as for those spending their COVID isolation period at a former boarding school and the asylum seekers awaiting resolution of their applications at the reception centre..

Those involved in the charitable campaign also help the migrants who camp in abandoned buildings in Timisoara after leaving reception centres in order to attempt to illegally enter Hungary and pursue their journey to Western Europe.

“Through private donations, contributions from other NGOs and companies, the help of Christian churches, the Muslim community and a lot of work, we try to alleviate the dire conditions in which they arrived and live,” says Ilioni-Loga, who praises the community’s response.

The empathy shown by thousands of Timisoarans to the asylum seekers is partly explained by the region’s geographical position near the border with Hungary and its history.

Timisoara is the capital of the Banat region, which in the 1980s attracted many Romanians who wanted to flee the brutal communist regime and cross into far more liberal Yugoslavia. From there, they could reach the West. Some were shot dead or drowned in the attempt.

“Many identify with the migrants’ stories because their own relatives swam across the Danube to get into the other side in search of a better life,” says Alina Birgean, the Baptist schoolteacher, while cooking rice and chicken schnitzel at her church’s community kitchen.

The food was about to be distributed among up to 70 recently arrived, mostly Afghan, migrants who were being kept at the Border Police building before going into quarantine.

Ilioni-Loga goes there with canned food, yogurt and water several times a week. He is touched by the gratitude of these people, mostly young but including some middle-aged men and women with children, who emerge from the muddy barracks to receive their rations with a slight touch of reverence and a timid “Thank you, Sir”.

Despite the mass show of solidarity, their efforts are never enough. The migrants have none of their basic needs completely covered, and there is always a new problem to solve. Someone is sick and needs medicine; someone’s worn-out clothes have become unusable; a woman having a period urgently needs sanitary pads.

For Flavius Ilioni-Loga, European politics and the latest developments in Afghanistan have brought about a new reality that is loaded with work and is never dull.

On a January afternoon, while driving home from the reception centre, this warm-hearted young Christian who once worked in Nevada as a casino cashier receives a phone call from the Islamic community.

A prominent Muslim woman from Bucharest has got wind of his work and wants to donate a sheep for the people staying at the Border Police barracks.

He pulls off the road and starts making calls to fulfill his latest mission: to find a halal butcher who can slaughter a sheep for the Muslim migrants.

Post Views: 66
Previous Why Turkey is Dialing Down Tensions in East Med
Next In Hostile Serbian Parliament, MP Fights for Rights of ‘Enemy’ Albanians 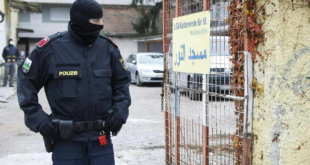