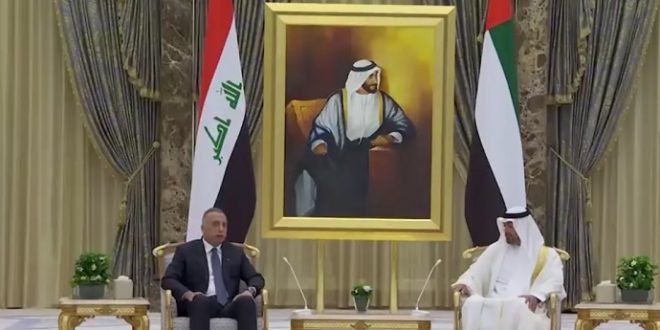 Received by Abu Dhabi Crown Prince, Iraqi Prime Minister Mustafa al-Kadhimi highlighted the importance of Iraq-UAE relations, hoping that his visit will help boost cooperation between the two countries in serving the interests of the peoples of the entire region.

Al-Kadhimi stressed that Iraq is going through a difficult period, seeking to weather the current conditions, and planning for the future while benefitting from successful experiences.

“We need the support of our brothers in the UAE to rebuild Iraq. In the same time, we stand by our Emirati brothers on protecting their development experience. We welcome them in Iraq, especially in the areas of investment and industry, and we are ready to boost our overall cooperation. This matter is of utmost importance to the national security of Iraq and the entire region,” he stated.

“We can establish stronger ties thanks to you, Your Highness Sheikh Mohamed, and thanks to the wisdom of the sons of Zayed,” he said.

On the regional situation, al-Kadhimi affirmed that Iraq aims to become a point of convergence and integration in a region that has witnessed numerous challenges, adding that it’s high time to establish stability through development.

“The UAE plays a key role in reinforcing the region’s stability,” he noted.

The Iraqi premier thanked the UAE for its role in renovating the heritage areas in Mosul, and for helping Iraq address the coronavirus pandemic, as well as its support for consecutive Iraqi governments on facing Daesh, noting that the UAE has always been supportive Iraq and its people.

At the end of the meeting, Al Kadhimi explained that Iraq needs all its brothers in the Arab world and is keen to return to the Arab fold.

He also expressed his appreciation for the warm welcome and hospitality he received during the visit.

Post Views: 3
Previous Mikdad Discusses With the Iraqi Minister of Immigration the Situation of the Displaced in Both Countries
Next UAE | Abu Dhabi Crown Prince: UAE remains committed to supporting stability, progress in Iraq