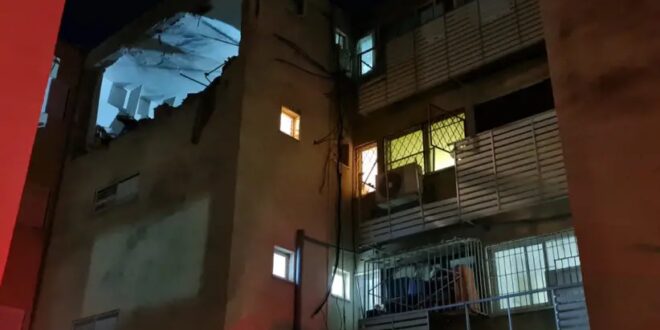 Rocket barrage comes as IDF prepares for possible ground invasion of the Gaza Strip. Plans were to be presented on Thursday to Netanyahu.

Two rockets hit houses in Sderot beside the Gaza border just as Hamas reportedly said that it is prepared for a “reciprocal ceasefire” as rocket barrages continued to slam into southern Israel on Friday.

One rocket directly hit a home and caused extensive damage to two additional homes in the neighborhood, with no injuries reported.

Another rocket which hit Sderot damaged a store in the city.

A top Hamas official said the group is ready for a “reciprocal” ceasefire if the international community pressures Israel to “suppress military actions” on the Temple Mount in Jerusalem, according to the BBC.

Israel has reportedly rejected ceasefire efforts so far which have been promoted by the United Nations and Egypt.

On Friday, Israel’s southern and central regions came under a heavy barrage of rockets fired from the Gaza Strip, with over 140 rockets launched into Israel from Gaza, 30 of which fell into the Gaza Strip.

Iron Dome managed to intercept dozens of the rockets, though some got through, falling on neighborhoods and causing injuries in the south.

A rocket damaged the electric grid in the southern part of Beersheba on Friday afternoon as it was undergoing repairs, according to the Beersheba city council. The outage left tens of thousands of people across the city without electricity.

A car caught fire on Friday afternoon after sustaining a direct hit from a rocket in the Beersheba region. One person was minorly injured and received medical treatment on site.

Another rocket fell close to the Airforce Technical school, also located in the south of the city.

In total, four of the rockets fired at Beersheba were intercepted, and another four fell in open areas.

A 50-year-old woman died Thursday night from injuries she suffered when running on Tuesday into a bomb shelter during a rocket siren in a town near Ashdod.

A 50-year-old man was critically injured in Ashkelon following a barrage on the city early Friday, Israeli press reported.

Hamas claimed to have launched over 100 rockets into the South, at Ashdod and Ashkelon. One rocket landed in Ramle and set a field on fire. Islamic Jihad threatened late Thursday that it as prepared to launch additional salvos against Israel.

The fresh barrage came as the IDF prepares for a possible ground offensive in Gaza and upped its airstrikes against Hamas and other terror groups in the Gaza Strip. On Thursday, the military called up 7,000 reservists as rocket barrages continue to pound the country.

On Thursday evening, Defense Minister Benny Gantz authorized the IDF to call up an additional 9,000 reservists as needed in accordance with operational needs.

The reservists would come from combat units and command center operators and would serve in the Southern Command, Central Command, and Northern Command, so that soldiers regularly stationed there could be sent on other missions.

Earlier in the day, the IDF called up reservists serving in artillery, Iron Dome batteries, doctors, paramedics, IAF, intelligence and other combat units. Another Iron Dome battery was also added to those placed around the country.

Combat troops will also not be able to leave their bases and additional ground troops have been redeployed to the border ahead of a possible ground operation, including from the Paratroopers Brigade, Golani Infantry Brigade and 7th Armored Brigade.

On Thursday afternoon, dozens of long-range rockets were fired in the direction of central Israel, including Tel Aviv, and as far south as Eilat. Several people were injured. A total of 1,600 rockets have been fired towards Israel since Monday, ⅓ of them have fallen inside the Gaza Strip.

Magen David Adom said that they have treated over 500 people injured since rocket fire began Monday. Seven people who have been killed since Monday. Nearly 400 people were injured as a result of rocket fire while over 160 were injured during clashes and riots, MDA said Thursday.

IDF Spokesperson Brig.-Gen. Hidai Zilberman said on Thursday that a ground invasion remained a viable option. The plans were to be presented to IDF Chief of Staff Lt.-Gen. Aviv Kohavi and then to the security cabinet for approval on Thursday and Friday.

Speaking to reporters, Zilberman said that the plans are being put together by the Gaza Division and Southern Command and will be then given to Israel’s political echelon for approval.

In the four days since Operation Guardians of the Walls began, an operation which is 95% airstrikes, over 700 Hamas and Islamic Jihad targets had been hit by the Israeli Air Force by Thursday evening, including 60 operatives and senior commanders..

The opening strikes by the IAF included key Hamas infrastructure which according to the military will affect the terror group for years to come, officials said. The IDF has hit government targets, banks as well senior leaders in the terror organization.

“The organization is losing everything,” the IDF Spokesperson told reporters on Thursday morning.

Among the targets belonging to Hamas that have been struck are those belonging to their police, Interior Ministry, banks, homes of commanders including that of the battalion commander of Khan Younis, a naval commando unit and a defensive tunnel inside a school.

Four high-rise buildings were also destroyed by Israel Air Force airstrikes and some 60 Hamas operatives have been killed including 10 senior commanders. Four anti-tank guided missile cells were taken out by the IDF on Thursday.

Nevertheless the IDF sees the operation continuing in order to strike additional targets that are key to Hamas’s military strength.

On Wednesday, an IDF soldier was killed by an anti-tank missile and a five-year-old boy was killed later in the day when a rocket scored a direct hit on the shelter of his family’s apartment building in Sderot.

According to the military, the rocket which struck the shelter came in at a specific angle and speed when it exploded on the building, which led to fragments piercing through the protective window.

Palestinian media reported on Thursday that at least 83 people have been killed in the IDF strikes, including 17 children, and that more than 487 have been wounded. Israel says that some were killed by rockets that misfired and fell inside Gaza.