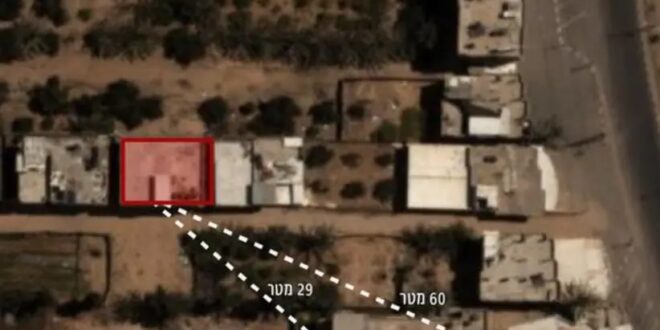 Some 2,000 rockets fired since fighting began on Monday.

The Israeli Air Force bombed Hamas’s underground tunnel network late Thursday night in the northern Gaza Strip in what military officials said was one of the most aggressive aerial assaults in recent years.

In a 40-minute-long air campaign which began around midnight, some 160 aircraft dropped over 450 missiles on 150 targets belonging to a network of tunnels dug by the terror group known as “the Metro” under Gaza city.

Speaking to reporters, IDF Spokesperson Brig.-Gen. Hidai Zilberman called the underground network a “strategic asset” to the group that used the kilometers of tunnels in northern Gaza to move weapons and fighters.

The military, he said, was still working to determine the extent of the damage.

They bombed an additional tunnel shaft in the southern Gaza Strip which was located near a kindergarten and a mosque on Friday evening.

A high-rise building which housed a branch of Hamas’ Palestinian production bank in the northern Gaza Strip was destroyed by IDF forces late on Friday afternoon, just as initial reports claimed that the IDF had bombed the house of Hamas military official Ayman Nepal after having removed civilians from their homes.

A Hamas cyber intelligence storage cell in the northern part of the Gaza strip was also destroyed by the IDF Communications and Cyber Defense division and the Israeli Air Force earlier in the day.

Additionally on Friday, IDF combat helicopters attacked a number of Hamas observation posts on land and sea in the southern Gaza Strip.

This comes after the IDF attacked a squad of Islamic Jihad operatives in the northern Gaza Strip soon after destroying a Hamas anti-tank squad in Gaza’s neighborhood of Shuja’iyya, while it was preparing to fire anti-tank weapons at Israeli territory.
IDF aircraft also attacked a squad of Hamas operatives in the northern Gaza Strip while it was preparing to launch rockets into the center of the country earlier, just after Friday morning, the IAF intercepted another drone that crossed from the Gaza Strip into Israel.

IDF Chief of Staff Lt.-Gen. Aviv Kohavi said in a statement after the operation that “Hamas made a serious mistake in deciding to fire on the State of Israel,” adding that the IDF was carrying out plans that it had prepared in advance, and there are “a number of other steps still ahead of us.”

Kochavi said the strikes caused “very significant damage to Hamas and the PIJ’s production lines and weapons that will them take a very long time to rehabilitate from.”

Rockets continued to pound Israel as the Israel military pummeled Gaza in one of the largest bombardments of Hamas and Palestinian Islamic Jihad since the escalations began.

Israeli tanks, artillery cannons and troops from the Golani brigade stationed along the border also carried out barrages towards Hamas targets when they came out to attack Israeli targets late Thursday night. A total of some 500 artillery shells and another 50 tank shells were used.

No troops crossed into Gaza, rather they stayed on the Israeli side, Zilberman said, clarifying earlier claims made by the IDF to foreign media.

The IDF also bombed Hamas weapons depots along with other weapons and launching sites. A senior Islamic Jihad anti-tank guided missile commander was also killed, the IDF said, and the Iron Dome downed another drone.

Earlier on Friday, IDF fighter jets bombed two apartments that functioned as Hamas weapons depots, the IDF spokesperson announced in a statement on Friday night. The weapons depots that were attacked were located in the homes of Hamas operatives, Muhammad Abu Shala and Fares Abu Shukran.

During the strikes the military ordered anyone living within four kilometers of the Gaza border to remain in a bomb shelter out of concern that Hamas might fire short range missiles or anti-tank guided missiles during the bombardment overnight. Five and half hours later the IDF removed the order, and said that people should stay in close proximity to a shelter should an attack happen.

The bombardment by the IDF is aimed, Zilberman said, at pressuring Hamas.

The Coordinator of Government Operations in the Occupied Territories (COGAT) Maj. Gen. Rassan Aliyan sent a message to the residents of the Gaza Strip on Friday evening.

“Gaza residents,” he started. “in recent days, and especially tonight, you have witnessed the IDF resolutely protecting the citizens of Israel, while Hamas continues to bring you destruction and devastation.”

“Is that how you imagined your holiday? A holiday without electricity and without water. A holiday where joy was replaced by fear.” Aliyan continued, telling the Gazans that their leaders have abandoned them in order to save themselves.

“It is a pity that after seven years of effort to improve the living situation in the Gaza strip, everything goes down the drain because of Hamas,” he concluded, signing off the video statement.

Heavy rocket fire towards southern Israel continued overnight and claimed the life of an 87-year-old woman after she suffered head injuries while running to shelter. Another man in his 50s was seriously injured after his home suffered a direct hit by a rocket in the city of Ashkelon. A home in the Eshkol Regional Council was also destroyed after it was hit by a rocket early on Thursday evening.

The Hamas-run Gaza Health Ministry said that 115 Palestinians have died since the fighting began and another 600 have been injured. Israel maintains that the large majority of those who have been killed are either members of Hamas or Palestinian Islamic Jihad or were killed by Hamas rocket fire that landed inside the enclave.

Some 2,000 rockets and mortars have been fired towards Israel from the Gaza Strip since the fighting began. An additional 220 projectiles were fired Thursday night and Friday morning, of which 30 landed in the Hamas-run territory.