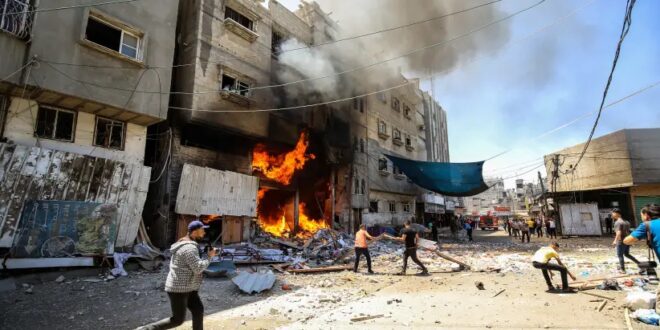 Publicly, Prime Minister Benjamin Netanyahu has warned Hamas that “it’s not over yet”.

Senior defense officials are pushing Prime Minister Benjamin Netanyahu and Defense Minister Benny Gantz to start working toward a ceasefire that would bring an end to the ongoing IDF operation against Hamas in the Gaza Strip. This is based on an understanding that the IDF has met most of its goals since the beginning of the operation on Monday evening.

On Sunday, the United Nations Security Council is scheduled to hold an emergency meeting to discuss the ongoing conflict and the Biden administration’s envoy arrived in Israel on Friday to begin talks aimed at finding a way to end the hostilities that have seen over 2,000 rockets fired from Gaza into Israel.

Publicly, Prime Minister Benjamin Netanyahu has warned Hamas that “it’s not over yet”.

“I said we would strike Hamas and other terror groups with significant blows, and we are doing so,” Netanyahu said in a video statement on Friday. “In the last day we attacked underground targets. Hamas thought it could hide there, but it can’t.”

“Hamas leaders think they can escape from our grasp. They cannot escape. We can reach them everywhere, all of their people – and we will continue to do so.”

“They attacked us on our holiday [Jerusalem Day], they attacked our capital, they fired missiles at our cities; they are paying and will continue to pay a heavy price for that,” he said. “It’s not over yet. We will do everything to restore security to our cities and our citizens.”

But defense officials have said that a continuation of the operation could end up leading to a mistake that would draw Israel into a wider conflict, including a ground offensive in the Gaza Strip that is currently not popular within the defense establishment.

Over the weekend, rockets continued to pound Israel as the IDF carried out large airstrikes in Gaza, striking dozens of targets belonging to terror groups in the coastal enclave.

Among the targets, the IAF struck the homes of Hamas battalion commander Tisar Mabasher in Khan Yunis, and of brigadier general Azi Tama’a in Deir al-Balah, whose homes were both used as military infrastructure. The damage made to these infrastructures will have damaged the military capabilities of Hamas operatives.

The IAF also struck rocket-launching sites, including the long-range launcher used to fire rockets on Jerusalem that began the latest escalation of violence on Monday. Other targets included a number of surface-to-surface missile launch sites, terror cells, a Hamas intelligence center, observation posts on land in and at sea off of the southern Gaza Strip, and anti-tank missile launch sites and cells.

Aircraft also struck the house of deputy leader of Hamas in Gaza Khalil al-Hayya in addition to the operational office belonging to Hamas Head of Security Forces Tawfiq Abu Naim in Rimal, which was used as the military infrastructure command and control center, and two apartments belonging to Hamas naval force operatives Muhammed Abu Shala and Fares Abu Shukran that served as weapons storage warehouses.

In one strike on the Shati refugee camp, ten people including eight children were killed. The IDF said that the strike was against an apartment that “serves as terror infrastructure” for Hamas.

“The IDF takes precautions to minimize possible harm to civilians during its military activities,” the statement added.
Hamas later said it fired dozens of rockets towards Tel Aviv in response to “the massacre of women and children at the Shati refugee camp.”

The IAF also struck a high rise building in Gaza that housed several media outlets including Al Jazeera and the Associated Press on Saturday afternoon. The residents of the building, which also housed a number of apartments and other offices, were warned ahead of the strike to evacuate the building.

The IDF said that the building, which was hit by fighter jets, contained “military assets of the military intelligence” of Hamas.

“The building housed the offices of civilian media, which the terrorist organization Hamas hides behind and uses as human shields. The terror organization Hamas deliberately places its military assets in the heart of the civilian population in the Gaza Strip,” the IDF said in a statement, adding that “prior to the attack, the IDF warned the civilians who were in the building and gave them sufficient time to evacuate.”

AP President and CEO Gary Pruit called the strike “an incredibly disturbing development” and said a dozen AP journalists and freelancers had been in the building and had been evacuated in time.

“We are shocked and horrified that the Israeli military would target and destroy the building housing AP’s bureau and other news organizations in Gaza,” he said in a statement.

“The world will know less about what is happening in Gaza because of what happened today.”

Hamas later warned the residents of Tel Aviv and central Israel to expect a response for that airstrike.

IDF forces thwarted the launch of an explosive drone from Gaza in to Israel on Saturday afternoon in addition to striking 20 rocket launching sites that were aiming at central and southern Israel, the Spokesperson’s Unit reported.

On Friday morning, Israel carried out one of the largest bombardments of Hamas and Palestinian Islamic Jihad since the fighting started.

In a 40-minute-long air campaign which began around midnight, some 160 aircraft dropped about 450 missiles on 150 targets belonging to a network of tunnels dug by the terror group known as “the Metro” under Gaza city.

Speaking to reporters, IDF Spokesperson Brig.-Gen. Hidai Zilberman called the underground network a “strategic asset” to the group that used the kilometers of tunnels in northern Gaza to move weapons and fighters.

The military is still working to determine the extent of the damage.

Israeli tanks, artillery cannons and troops from the Golani brigade stationed along the border also carried out barrages toward Hamas targets when they came out to attack Israeli targets. A total of some 500 artillery shells and another 50 tank shells were used.

The Hamas-run Gaza Health Ministry said that 139 Palestinians have died since the fighting began including 39 children and 22 women. Another 1,000 have been injured, according to the health ministry. Israel maintains that the large majority of those who have been killed are either members of Hamas or Palestinian Islamic Jihad or were killed by Hamas rocket fire that landed inside the enclave.

No troops crossed into Gaza, but instead stayed on the Israeli side, Zilberman said, clarifying earlier claims made by the IDF to foreign media.

During the strikes the military ordered anyone living within four kilometers of the Gaza border to remain in a bomb shelter out of concern that Hamas might fire short range missiles or anti-tank guided missiles during the bombardment overnight. Five and half hours later the IDF removed the order, and said that people should stay in close proximity to a shelter should an attack happen.