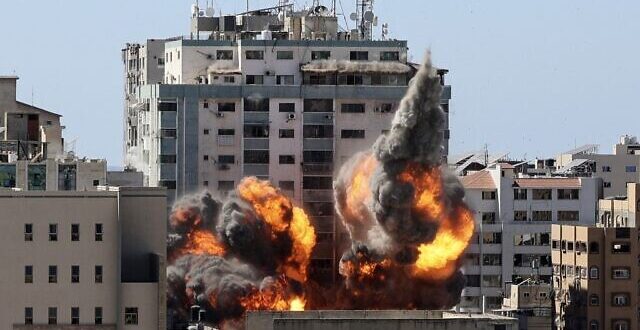 As US President Joe Biden and other major American figures raised concerns over the weekend regarding recent Israeli strikes that killed a number of Palestinian civilians and destroyed a Gaza building used by international media outlets, which Israel maintained also housed terror groups, Israeli officials indicated Sunday that a ceasefire with Hamas and the Palestinian Islamic Jihad could be coming.

Senior Israeli officials told the Walla news site ahead of Sunday’s security cabinet meeting that the calls were being heard and that Israel would start moving toward a ceasefire now that a number of military objectives had been achieved against Hamas, as well as in response to the growing international pressure.

The anonymous officials said that as with previous agreements between Israel and the Gaza terror groups, the ceasefire would be mediated by Egypt.

Since Friday night, the Israel Defense Forces conducted a series of airstrikes in the Gaza Strip, extensively targeting Hamas and Palestinian Islamic Jihad infrastructure and personnel in response to the over 2,500 rockets that had been fired toward Israel from the enclave over the preceding days.

In one such strike late Friday night, which the IDF said was aimed at a group of top Hamas leaders who were meeting in a building in the Shati refugee camp in northern Gaza, at least 10 Palestinian civilians, most of them children, were killed. The IDF said it was investigating the circumstances of the strike.

On Saturday, after warning occupants to leave, an Israeli airstrike flattened a tower in Gaza City that housed offices of The Associated Press, Al Jazeera and other media outlets. The IDF accused Hamas of “hiding behind” the offices of the press outlets in the tower and “using them as human shields.”

Biden discussed the felling of the tower in a call with Prime Minister Benjamin Netanyahu on Saturday, saying that he “raised concerns about the safety and security” of journalists.

“The president updated the prime minister on high-level US engagement with regional partners on this issue and discussed ongoing diplomatic efforts. The president noted that this current period of conflict has tragically claimed the lives of Israeli and Palestinian civilians, including children,” a statement issued by the White House read. “He raised concerns about the safety and security of journalists and reinforced the need to ensure their protection.”

On Saturday, White House press secretary Jen Psaki said the US had “communicated directly to the Israelis that ensuring the safety and security of journalists and independent media is a paramount responsibility.”

Additionally, US Defense Secretary Lloyd Austin spoke with Defense Minister Benny Gantz and “shared his view on the need to restore calm,” according to an American statement.

And a staunch advocate for Jerusalem in the Democrat Party and chairman of the Senate Foreign Relations Committee issued a statement condemning parts of Israel’s bombing campaign in Gaza.

“I am deeply troubled by reports of Israeli military actions that resulted in the death of innocent civilians in Gaza as well as Israeli targeting of buildings housing international media outlets,” said Sen. Robert Menendez.

“Given the complexity of Gaza’s densely populated civilian areas and Hamas’s shameful record of exploiting that reality by hiding military assets behind the innocent, Israeli authorities must continue to take the conscientious practice of giving advance warning of its attacks to reduce the risk of harm to the innocent. I also believe there must be a full accounting of actions that have led to civilian deaths and destruction of media outlets,” Menendez said.

Israel Defense Forces Spokesperson Hidai Zilberman pushed back against the criticism by American and international voices regarding the military’s strike on the tower, saying that despite the presence of news outlets, the building represented a legitimate military target.

“If Hamas and the Islamic Jihad think that the media are their shield, then in the next operation in Gaza, we’ll find that media outlet’s offices are going to be popping up as covers for terrorist assets,” he said.

In response to the flattening of the tower, Abu Obeida, the spokesman of Hamas’s military wing, threatened to target Tel Aviv and the center of the country in revenge, later making good on the threat.

Palestinian terror groups in Gaza fired massive volleys of rockets at central and southern Israel after midnight Saturday, prompting heavy retaliatory airstrikes by Israel that targeted the home of the Hamas terror group’s leader in the coastal enclave among other sites.

The renewed bombardment, claimed by Hamas, saw a large barrage of some 55 rockets fired at Tel Aviv and numerous cities and towns in central Israel and toward northern parts of the West Bank, according to the Israel Defense Forces. Additional salvoes were launched at southern cities of Beersheba, Ashdod and Ashkelon, as well as surrounding towns.

“We intercepted a very, very good percentage of them,” he said.

There were no reports of injuries, save for 10 people hurt while running to bomb shelters, the Magen David Adom ambulance service said. Rocket shrapnel from interceptions by the Iron Dome missile defense system reportedly struck a number of cities, including Ashdod, Gan Yavne and Ramle.

Shortly after the latest salvo, intensive Israeli strikes were reported by Palestinian media throughout the Gaza Strip.

he homes of Hamas’s leader in the Gaza Strip, Yahya Sinwar, was bombed in the raids, as was the home of his brother Muhammad, who is responsible for human resources in the terror group, the Israel Defense Forces said, releasing video footage of the strikes in the southern Gaza city of Khan Younis.

According to the military, the homes were also used by the brothers to conduct terrorist activities. The buildings did not appear to be occupied at the time of the attacks.

The IDF said it also conducted a large-scale strike on Hamas’ sprawling underground tunnel network in the Palestinian enclave, which the military refers to as “the metro,” continuing a campaign that began on Thursday night with a massive attack on such underground infrastructure in northern Gaza.

“As part of a Stage 2 of additional attacks on Hamas’s ‘metro,’ some 30 targets were attacked by fighter jets using roughly 100 precision-guided weapons,” the IDF said.

Zilberman said the strikes seemed to be raising concern among Hamas members that the tunnel network is no longer an asset. “No one wants to ride the ‘metro,’” Zilberman said.

The military said it also targeted a number of weapons caches and rocket launching sites, as well as the homes and offices of several top terrorist leaders.

According to the Hamas-run Health Ministry, 15 Palestinians were killed and 25 were wounded in the latest round of Israeli air raids, which continued into Sunday morning.

The deaths took the Palestinian toll from the fighting to 174 on Sunday, including dozens of children, with over 1,000 wounded, according to the Hamas-run health ministry. The Hamas and Islamic Jihad terror groups have confirmed 20 deaths in their ranks, though Israel says that number is much higher and that dozens of those killed were terrorists. In addition, the IDF says some deaths were caused by errant rockets fired at Israel which fell short of their targets and landed in the Strip.

Palestinian terrorists in Gaza have fired over 2,500 rockets at Israel since the outbreak of fighting on Monday, according to the Israel Defense Forces. Ten Israelis, including a 5-year-old boy and 16-year-old girl, have been killed in the rocket fire, and hundreds have been injured.

The most recent casualty was on Saturday afternoon when a man was killed by a projectile that struck the Tel Aviv suburb of Ramat Gan. According to Channel 12 news, the man did not have a protected area in his home and was unable to reach a bomb shelter in time. The outlet said shrapnel from the rocket pierced the door to the man’s home.

In a televised statement on Saturday night, Prime Minister Benjamin Netanyahu defended Israel’s military operation in Gaza and said the fighting would continue for several more days. He warned terror leaders: “You can’t hide, not above land or below it. No one is immune.”

Post Views: 108
Previous Report: Hezbollah has ‘no interest’ in Gaza fighting spreading to Lebanon
Next While all eyes are on Gaza, Gaza is only half the story