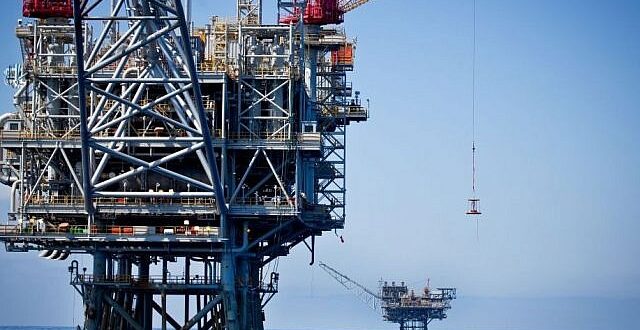 No projectiles have come close to striking platform, which is protected by an Iron Dome battery; IDF targeting the Gaza ruling terror group’s naval assets

During the past week, the Hamas terror group has fired dozens of rockets toward Israel’s Tamar natural gas rig, which was drained of fuel and temporarily taken offline at the start of the fighting, The Times of Israel learned Sunday.

None of these rockets came close to striking the rig, which is protected by a ship-borne Iron Dome anti-missile battery and other defensive systems. As rockets produced in the Strip are not precision-guided munitions, they are highly unlikely to ever hit the rig, an exceedingly small target to hit from the coast.

Unmanned aerial vehicles carrying explosives, like the ones shot down by an F-16 fighter jet over the sea last week, could more effectively target the rig, requiring the Israeli Navy’s considerable air defenses.

Overall, the navy has successfully prevented all of Hamas’s attempts to use its naval capabilities against Israeli targets at sea and onshore. The IDF has also destroyed most of the terror group’s naval infrastructure and weaponry over the past week, including a number of autonomous submarines that Hamas has developed in recent years, each capable of carrying 30 kilograms (66 pounds) of explosives and guided by GPS, though the military believes that several more of the weapons may still be in Hamas’s possession.

The head of Hamas’s naval and submarine research and development department was also killed in an Israeli strike. Despite certain reports to the contrary in the Hebrew press, the military does not believe that it has killed the head of Hamas’s naval commando unit, though it has noticed that he has not been in contact with other members of the terror group and is officially designated by the IDF to be “missing.”

“The most significant thing, as in all of the IDF, is denying [the enemy] capabilities and establishing a strong defense. Therefore, we have attacked bases, vessels, weapons warehouses, infrastructure and operatives. We have acted so that the naval arms of the Palestinian Islamic Jihad and Hamas would be depressed,” the head of the Israeli Navy Maj. Gen. Eli Sharvit told reporters.

On Wednesday, US energy giant Chevron announced it was shutting down operations at Tamar at Israel’s request, as Hamas said it targeted the natural gas field.

The Energy Ministry denied any connection between the shutdown and the Hamas statement. Energy Minister Yuval Steinitz’s office said he gave the order to halt operations at Tamar on Tuesday as an “extra precaution.”

His office also said “various steps have been taken to ensure the continuation of the gas supply to power plants for industrial factories throughout the country and there’s not expected to be any disruption of the power supply in Israel.”

Though Tamar was shuttered, a Chevron spokeswoman said operations were continuing at the larger Leviathan gas field off Israel’s northern shore. Tamar is 23 kilometers (14 miles) off the coast of Ashkelon, a southern city that has been pummeled by the ongoing rocket fire.

Israel has previously shuttered Tamar during fighting between the military and Palestinian terrorists in Gaza. When Steinitz ordered operations to stop there in May 2019, Tamar was the country’s only operating natural gas source as Leviathan had not yet begun pumping gas, causing power stations to use other fuels to meet electricity demands.

The California-based Chevron owns a 39.66 percent share in Tamar through its acquisition of Noble Energy.

Palestinian terrorists in Gaza have fired some 3,000 rockets at Israel since the outbreak of fighting on Monday, according to the Israel Defense Forces. Ten Israelis, including a 5-year-old boy and 16-year-old girl, have been killed in the rocket fire, and hundreds have been injured.

The Palestinian toll from the fighting reached 197 on Sunday, including dozens of children, with over 1,200 wounded, according to the Hamas-run health ministry. The Hamas and Islamic Jihad terror groups have confirmed 20 deaths in their ranks, though Israel says that number is much higher and that dozens of those killed were terrorists. In addition, the IDF says some deaths were caused by errant rockets fired at Israel which fell short of their targets and landed in the Strip.