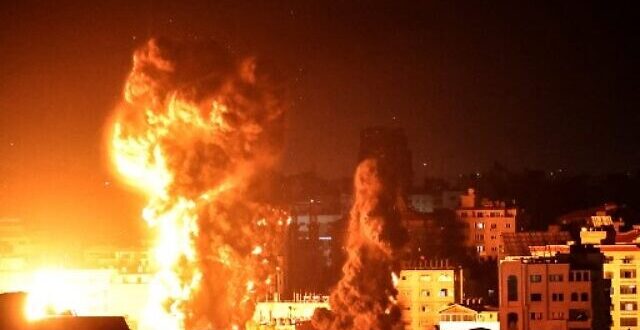 Israeli warplanes unleashed a new series of heavy airstrikes at several locations in the Gaza Strip early Monday, as the US said all sides in the Israel-Hamas fighting must de-escalate, and the violence “must end immediately.”

Explosions rocked Gaza City from north to south in an attack that was heavier, on a wider area and lasted longer than a series of air raids 24 hours earlier in which 42 Palestinians were killed — the deadliest single attack in the latest round of violence between Israel and the Hamas terror group that rules Gaza. The earlier Israeli airstrikes flattened three buildings.

Residents of Gaza described the overnight Israeli barrage as the heaviest since the fighting in the Hamas-ruled enclave began a week ago. The strikes caused widespread power cuts and damaged hundreds of buildings, authorities in Gaza said. Hours after the strikes, the Hamas-run health ministry in Gaza reported another fatality in the week-long flareup.

A three-story building in Gaza City was heavily damaged, but residents said the military warned them 10 minutes before the strike and everyone cleared out. They said many of the airstrikes hit nearby farmland.

The IDF has dubbed Hamas’s series of underground tunnels “the metro.” It described the passages hit over night as the “C” line.

“As part of the attack, some 35 terror targets were attacked in a time period of around 20 minutes,” a statement from the military said.

It also said the attack included 54 fighter planes that dropped some 110 precision munitions, striking 15 kilometers (over 9 miles) of tunnels.

“This attack was part of a broad operation by the IDF to significantly damage the underground system of terror organizations in Gaza,” the IDF said.

The IDF said it also struck a Hamas-dug tunnel shaft located near a kindergarten and mosque in southern Gaza.

The location of the site “proves once again how the Hamas terror organization deliberately places its military assets in the heart of civilian populations,” the military said.

It added: “The IDF takes as many precautionary measures as possible to reduce possible harm to civilians during its military activities.”

Initially, the military said it was carrying out “widespread strikes.” Among the other targets it reported striking overnight were the homes of nine Hamas commanders throughout the Gaza Strip.

“The houses attacked were used as terrorist infrastructure and in some of the houses, weapons depots were even found,” the IDF said.

A home in Shejaiya used by Hamas military intelligence was also targeted.

During the night several rounds of rocket fire targeted Israeli cities. At least 9 rockets targeted Beersheba, with several intercepted by Iron Dome. The rest fell in open areas. Ashkelon and surrounding communities were also targeted. There were no immediate reports of injuries.

After a three hour pause in which no alarms sounded, sirens rang out around 7 a.m. in Kibbutz Kerem Shalom near the Gaza border.

The IDF said some 60 rockets were fired at Israel between 7 p.m. Sunday evening and 7 a.m. Monday morning, around 10 of which failed to clear the border and landed in the Strip.

The military also said many of the rockets were intercepted, without specifying the number.

The overnight violence came as US Secretary of State Antony Blinken called for the fighting to end, marking a change in the US tone, with the Biden administration stepping up diplomatic efforts in the region, and holding a flurry of talks with regional leaders.

Following his call with Shoukry, Blinken tweeted that “all parties need to deescalate tensions – the violence must end immediately.”

Blinken’s comments appeared to be the first time a senior US official has called for an immediate end to violence.

Also Sunday, US President Joe Biden said his administration is working “toward sustained calm” between Israel and the Palestinians.

In virtual remarks on a pre-taped video played at a White House ceremony to mark Eid al-Fitr at the end of the Muslim holy month of Ramadan, Biden said: “My administration is going to continue to engage Palestinians and Israelis and other regional partners to work toward sustained calm.”

“We also believe Palestinians and Israelis equally deserve to live in safety and security and enjoy equal measure of freedom, prosperity and democracy.”

In previous days, the US has emphasized that Israel has the right to defend itself and suggested Israel would be given time to complete operations against Hamas.

Meanwhile, Hebrew media reported United Nations envoy Tor Wennesland has been leading “intensive” talks with Israeli, Hamas and Egyptian officials over the past day in a bid to broker a ceasefire.

Prime Minister Benjamin Netanyahu said earlier Sunday that the fighting in the Gaza Strip — now in its seventh day — would “take more time” and touted the support from the United States and other countries.

A diplomatic source said a possible ceasefire was not discussed at a meeting of the high-level security cabinet on Sunday.

The source was also quoted by Ynet news predicting that the fighting would end this week. However, Channel 12 news reported on a security source saying the current round of hostilities was nearing its end and that Israel was “entering a critical 24-hour period.”

There was no official comment from authorities on the meeting.

Speaking after the meeting and following consultations with security chiefs, Netanyahu said Operation Guardian of the Walls was “continuing at full strength.” He said over 1,000 targets have been struck in Gaza, exacting a serious toll on Hamas, including their underground assets, which he described as having suffered a serious, but not complete, blow.

“No terrorist is immune,” he threatened during a televised statement at the Kirya military headquarters, noting the IDF has also taken out “terror towers,” referring to high-rise buildings leveled by Israeli airstrikes.

He added that the military was doing what it could to keep civilian casualties to a minimum.

“This will take time. There is pressure but we are getting serious backing, foremost from the US,” he said. “We have international backing and we are using it.”

Despite Netanyahu suggesting the fighting was not winding down and touting the support of the US, senior Israeli officials told the Walla news site earlier Sunday that the calls by Biden and other major American figures were being heard and that Israel would start moving toward a ceasefire now that a number of military objectives had been achieved against Hamas, as well as in response to the growing international pressure.

The anonymous officials said that as with previous agreements between Israel and the Gaza terror groups, the ceasefire would be mediated by Egypt.

US Deputy Assistant Secretary for Israeli-Palestinian Affairs Hady Amr arrived in Tel Aviv on Friday and has been holding meetings with Israeli and Palestinian officials aimed at reaching a ceasefire.

According to the IDF, Israel has faced the highest ever rate of rocket attacks on its territory during its latest confrontation with Hamas. Since Monday, armed groups in Gaza have fired about 3,000 rockets toward Israel, surpassing the pace during an escalation of violence in 2019 and during the 2006 war with Lebanon’s Hezbollah, said Maj. Gen. Ori Gordin.

Ten Israelis, including a 5-year-old boy and 16-year-old girl, have been killed in the rocket fire, and hundreds have been injured.

The Palestinian toll from the fighting reached 198 on Monday, including dozens of minors, with some 1,300 wounded, according to the Hamas-run health ministry. The Hamas and Islamic Jihad terror groups have confirmed 20 deaths in their ranks, though Israel says that number is much higher and that dozens of those killed were terrorists. In addition, the IDF says some deaths were caused by errant rockets fired at Israel which fell short of their targets and landed in the Strip.