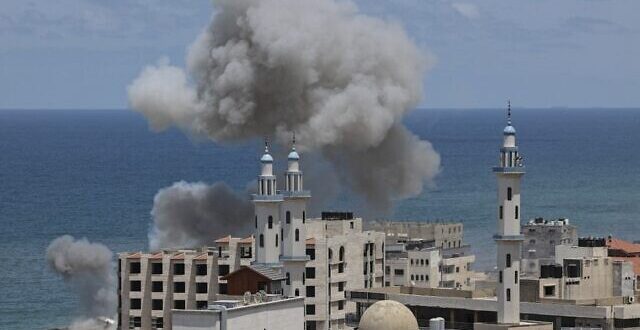 “The martyr Hussam was a model as a leader and a soldier and in the performance of his tasks and duties,” the group said in a statement.

The terror group often works alongside Gaza’s Hamas rulers, and their armed wings are closely aligned.

According to unconfirmed reports in Palestinian media, Abu Harbeed was killed near his home in Beit Lahiya in the northern Gaza Strip.

One of the rockets landed in the southern city of Ashdod, lightly hurting three Israelis. Another five people at the scene were treated for shock.

Meanwhile, initial reports indicated another three Palestinians were killed in Gaza on Monday as Israeli forces struck a car in Khan Younis in southern Gaza.

Israel has long sought to eliminate the leadership of armed Palestinian organizations in Gaza, including through targeted airstrikes. Over the past week, at least three Islamic Jihad commanders and a senior Hamas figure were killed in Israeli strikes.

In 2019, Israel targeted senior Islamic Jihad commander Baha Abu al-Ata, successfully killing him. Abu al-Ata’s death touched off a round of escalation between Israel and Islamic Jihad, leading to the deaths of 34 Palestinians.

It was unclear how the killing of Abu Harbeed — who was reportedly seen as Abu al-Ata’s heir — could play into ongoing attempts to reach a ceasefire between Israel and Hamas.

The targeted killing comes as hostilities between Israel and Gaza-based terror groups carried on for an eighth day.

Zilberman also spoke of Hamas’s internal Gaza tunnel network — referred to by the IDF as “the metro”, which was bombarded numerous times over the course of the fighting. The military on Monday claimed it had destroyed some 100 kilometers’ worth of tunnels.

“We see the [terror group] members fear of going underground,” Zilberman said. “They have a very big dilemma whether to be above or below ground. I think the impact on rocket fire is not high, but the impact on other aspects including [Hamas’s] command and control is much higher,” he added.

The United Nations, Egypt, Qatar and other countries have been seeking to reach an armistice between Israel and Hamas over the past few days. Israel has reportedly refused ceasefire efforts, however, in the hopes of re-establishing deterrence against Hamas.

Palestinian terrorists in Gaza have fired some 3,000 rockets at Israel since the outbreak of fighting on Monday, according to the Israel Defense Forces. Israel has responded with widespread airstrikes against targets across the Gaza Strip.

According to the Hamas-run Gaza health ministry, 200 Palestinians have died since the beginning of the fighting, 59 of them children. Israel has said it does not target civilians, and that many of the dead were terrorists or killed by errant Hamas rockets.

On Sunday, 42 Palestinians were reported killed in the deadliest single strike since the violence erupted a week ago. The IDF said it had targeted Hamas infrastructure under the homes of Palestinian civilians.

Ten people in Israel, including a 5-year-old boy and a 16-year-old girl, have been killed in the rocket fire, and hundreds have been injured.

Post Views: 78
Previous While all eyes are on Gaza, Gaza is only half the story
Next IDF hits Hamas tunnels in massive strikes on Gaza as ceasefire pressure mounts