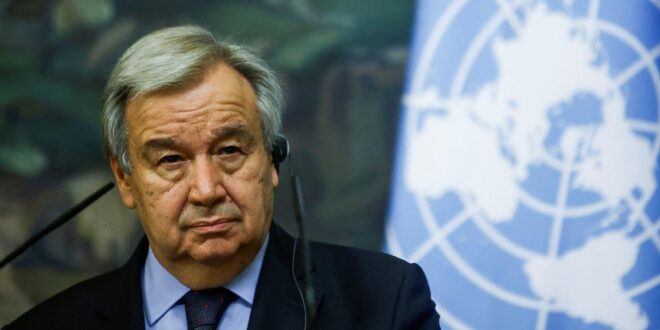 UN Secretary-General Antonio Guterres pleaded for an immediate end to violence while opening a Security Council session on the Middle East, as Israel continued deadly strikes on Gaza.

UN Secretary-General Antonio Guterres on Sunday pleaded for an immediate end to horrific violence as Israel continued with a deadly assault on Gaza, warning a Security Council meeting that the fighting could plunge the region into an “uncontainable” crisis.

“Fighting must stop. It must stop immediately,” Guterres said as he opened a Security Council session delayed by Israel’s ally the United States, calling the violence that has killed nearly 200 people – most of them Palestinians – over the past week “utterly appalling.”

“It has the potential to unleash an uncontainable security and humanitarian crisis and to further foster extremism, not only in the occupied Palestinian territory and Israel, but in the region as a whole,” he said.

Guterres condemned the fresh Israeli airstrikes on Sunday which killed 40 Palestinians, the worst death toll since the unrest broke out.

“This senseless cycle of bloodshed, terror and destruction must stop immediately,” Guterres said.

He also renewed criticism of an Israeli strike on Saturday that destroyed the Gaza offices of two major news outlets, Al-Jazeera and the Associated Press.

“Journalists must be allowed to work free of fear and harassment. The destruction of media offices in Gaza is extremely concerning,” Guterres said.

Israel launched its air offensive after Hamas fired rockets in response to attacks by Israeli security forces which injured hundreds of worshippers at Jerusalem’s Al-Aqsa Mosque.

“Rockets and mortars on one side and aerial and artillery bombardments on the other must stop. I appeal to all parties to heed this call,” Guterres said.

He also voiced alarm at the rise of extremist Jewish movements whose push to expel Palestinians out of Jerusalem helped trigger the crisis.

“In Israel, violence by vigilante-style groups and mobs has added a further horrendous dimension to an already deteriorating crisis,” Guterres said.

“Leaders on all sides have a responsibility to curb inflammatory rhetoric and calm the rising tensions.”

Post Views: 78
Previous Biden and Iran: Temptation to Save the Zombie
Next Ceasefire between Israel, Hamas may be within reach – Egypt, Jordan