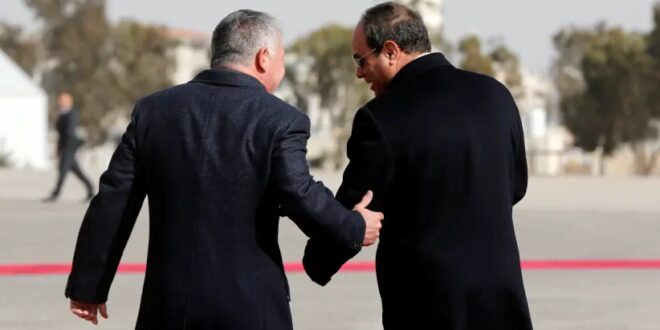 Ceasefire between Israel, Hamas may be within reach – Egypt, Jordan

Egyptian President Abdel Fattah al-Sisi and Jordanian King Abdullah have both tried to promote a ceasefire between Israel and Hamas, as operation “Guardian of the Walls” enters its eighth day.

Egyptian President Abdel Fattah al-Sisi said on Monday that a ceasefire between Israel and Hamas might be within reach.

“Egypt is going to great lengths to reach a ceasefire between the Israelis and Palestinians – and hope still exists that a collective action could end the conflict,” he said in an interview to the Al Arabiya news outlet.

“It is increasingly important to clam the spirits and end the violence and the killing,” the Egyptian president added.
Over the weekend Israeli and Arab media reported that Egypt had worked to negotiate a 12-hour ceasefire between the parties. Israel had objected to the deal’s terms.

According to Al Arabiyam Egypt was preparing to send two security delegations to Tel Aviv and to Gaza, in another attempt to promote calm between Israel and Hamas.

Al-Sisi’s comments echoed those of Jordan’s King Abdullah, who said on Sunday that his kingdom was involved in intensive diplomacy to halt what he characterized as Israeli military escalation in the worst Israeli-Palestinian violence in years.

The monarch, whose ruling family has custodianship of Muslim and Christian sites in Jerusalem, did not elaborate on the diplomacy, which was communicated via a news flash on state media.

Jordanian government officials have told Reuters the pro-Western kingdom is leading a diplomatic campaign with its European and US allies to put pressure on Israel to end its air and artillery barrage on Gaza since fighting erupted last Monday.

The Israeli military says that Hamas, an Islamist group regarded by much of the international community as a terrorist movement, and other armed factions have fired more than 2,800 rockets from Gaza over the past week.

“Israel carries as the existing occupation force responsibility for the dangerous situation in occupied Palestinian land and what it is causing in violence, killings, destruction and suffering,” Safadi said.

Thousands of Jordanians, most of them of Palestinian origin, took to the streets of the capital Amman on Sunday, calling on the kingdom scrap its peace deal with Israel.

Qatar foreign minister Sheikh Mohammed bin Abdulrahman Al-Thani received a call on Sunday from US Secretary of State Antony Blinken in which they discussed developments in Gaza, the Qatari foreign ministry said.

“During the call, they discussed the recent Israeli attacks on worshippers on Al Aqsa mosque and the attack on the besieged Gaza Strip,” a ministry statement added.

Jordan has recently stepped up its pressure on Israel, primarily regarding the riots between worshipers and security forces in Jerusalem’s Al Aqsa mosque, which the regime has called “barbaric attacks” by Israel. Some critics have claimed in turn that Jordan has played a role in encouraging violence by issuing such statements.