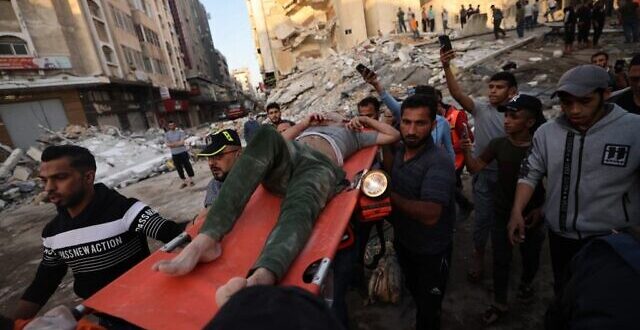 ‘Screams under the rubble’: 42 said killed in Israeli airstrike in Gaza City

Most of those who perished belonged to the same extended family, including young children; IDF says it targeted Hamas military infrastructure under civilian homes

At least 42 Palestinians, including a 1-year-old baby and a 3-year-old toddler, were killed in an Israeli airstrike in Gaza City early on Sunday morning, the Hamas-run Gaza Health Ministry said.

Dozens remained trapped under the rubble of collapsed buildings in Gaza City’s upscale al-Rimal neighborhood, according to the Palestinian Civil Defense organization. Paramedics and rescue crews continued to seek to extract the dead and survivors.

“We’re hearing screams under the rubble,” a member of the Civil Defense told the Al-Jazeera network as the search and rescue operation continued behind him.

Palestinian doctor Ahmad Abu al-Aouf, who served as director of internal medicine at Gaza’s al-Shifa Hospital, was reportedly killed in the bombing. A number of his colleagues held an impromptu funeral near the hospital on Sunday morning, reciting Quranic verses over his body.

Another doctor, Moueen al-Aloul, one of the coastal enclave’s few neurologists, was also reportedly killed as well.

Most of those who perished were from the extended al-Kolak family. According to the Hamas Health Ministry, a 3-year-old toddler, Adam Izzat al-Kolak, and a 1-year-old baby, Qusai Samih al-Kolak, were among the casualties.

The operation appeared to be the single deadliest strike in the ongoing Israeli operation against Gaza terror groups. The Israeli military engaged in an intense bombardment of the coastal enclave early on Sunday morning, tearing up streets across Gaza City.

Late on Sunday night, a spokesperson for the Israel Defense Forces said the airstrike was intended to destroy underground Hamas military infrastructure.

The Hamas military infrastructure was under civilian homes, according to the spokesperson, who declined to say whether the IDF was aware of how many civilian casualties such a strike would cause.

Israel has said it does not target civilians. According to the Israeli military, most of those killed in Gaza since the start of the current round of violence were either members of terror groups or were killed by errant Palestinian rockets.

The Hamas-run Gaza Health Ministry said on Sunday afternoon that 197 Palestinians have died since the beginning of hostilities between Hamas and Israel last Monday evening. According to the ministry, 58 of those killed were children.

At least another 1,230 Palestinians were wounded in varying degrees, according to the ministry.

Another deadly series of airstrikes in the Gaza Strip’s al-Shati refugee camp on Friday night took the lives of 10 members of the Abu Hatab family. A 10-month-old child, Omar Abu Hatab, was the sole survivor, local media reported.

The IDF said the strike was aimed at top Hamas officials who were meeting in the building, but said it was investigating the incident.

“During the night, the IDF attacked a number of senior Hamas figures in an apartment used as terrorist infrastructure in the area of the Shati refugee camp in the northern Gaza Strip,” the military said.

Palestinian terrorists in Gaza have fired over 2,500 rockets at Israel since the outbreak of fighting on Monday, according to the Israeli army. Ten people, including a 5-year-old boy and 16-year-old girl, have been killed in the rocket fire, and hundreds have been injured.

Separately, Israeli airstrikes damaged a local clinic for the international Doctors Without Borders aid group, commonly known by its French name Médecins Sans Frontières. No staff were wounded during the strike, MSF said.

According to the aid group, a shell struck a building adjacent to the MSF clinic, partially destroying it.

“One of the rooms is completely destroyed, but the rest of the structure is still usable as a clinic,” said Ely Sok, who directs MSF’s mission to the Palestinian territories.

Sok added that no one had called them to warn them that the clinic was in the vicinity of the shelling.

Post Views: 60
Previous Ceasefire between Israel, Hamas may be within reach – Egypt, Jordan
Next Report: Hezbollah has ‘no interest’ in Gaza fighting spreading to Lebanon