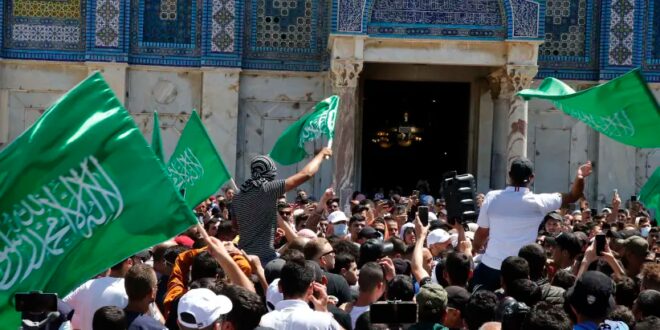 Why does Hamas insist Israel-Gaza ceasefire include Jerusalem? – analysis

As far as Hamas is concerned, any ceasefire agreement that ignores Jerusalem will make it appear as if the Gaza-based terrorist group did not score any significant achievements.

Hamas’s insistence on including the issue of Jerusalem in any ceasefire deal with Israel is the main reason why efforts to end the fighting have thus far been unsuccessful.

Hamas started the fighting because of Jerusalem and cannot afford to end it without an agreement that includes the city.

Hamas needs to show the Palestinians that its attacks on Israel, which it refers to as “Sword of Jerusalem,” were not in vain and that it managed to force Israel to make concessions to the Palestinians on issues related to the city, particularly al-Aqsa Mosque and the controversy surrounding the planned eviction of Arab families from the Sheikh Jarrah neighborhood.

As far as Hamas is concerned, any ceasefire agreement that ignores Jerusalem will make it appear as if the Gaza-based terrorist group did not score any significant achievement as a result of the fighting with Israel.

Hamas wants to appear as the “defender” of Jerusalem and its Palestinian residents and holy sites. That’s why Hamas last week initiated the rocket attacks on Jerusalem.

Any ceasefire deal that mentions Jerusalem, on the other hand, will be seen by Hamas and other Palestinians as a major victory. If that happens, Hamas will score points with the Palestinians for having forced Israel, for example, to halt the eviction of the families from Sheikh Jarrah or end visits by Jews to the Aqsa Mosque compound on the Temple Mount.

Hamas leaders said in the past few days that their “conditions” for agreeing to a ceasefire with Israel include “a withdrawal of the occupation from the blessed al-Aqsa Mosque, ensuring freedom of worship for Palestinians [at the site] and halting plans to evict the families from their homes in Sheikh Jarrah.”

Including Jerusalem in any ceasefire deal will also allow Hamas to show that its actions and policies are not restricted to what happens in the Gaza Strip and that it can impact events in Jerusalem. Hamas wants to be a major player not only in the Gaza Strip, but also in Jerusalem, the West Bank and even among Israel’s Arab citizens.

Palestinian Authority President Mahmoud Abbas put the issue of Jerusalem on the table when, in late April, he delayed the Palestinian general elections on the pretext that Israel did not allow the vote to take place in Jerusalem.

Hamas could not afford a situation where Abbas and his ruling Fatah faction appear to be the only Palestinians who care about al-Aqsa Mosque, Sheikh Jarrah and Jerusalem.

That’s why Hamas swooped in and hijacked the protests that erupted in Jerusalem between Palestinians and the Israel Police, turning them into rallies in support of the Gaza-based group and its leaders. Photos of Hamas leaders and flags have become part of the scenery in some areas of east Jerusalem, including the Aqsa Mosque compound.

Hamas is now hoping to reap the fruits of its rocket attacks on Israel by making Jerusalem the main theme of any ceasefire.

Such a deal would allow Hamas to claim that it was worth sacrificing the lives of hundreds of Palestinians for the sake of defending Islam’s third-holiest site and preventing Israel from carrying out its purported scheme to “Judaize” Jerusalem and control al-Aqsa Mosque.

Accordingly, any concessions to Hamas on the issue of Jerusalem would be bad not only for Israel, but also for Abbas, for Jordan and for other Arab countries that do not wish to see the Islamist group throw its weight around in the city or be part of any arrangements at al-Aqsa Mosque.