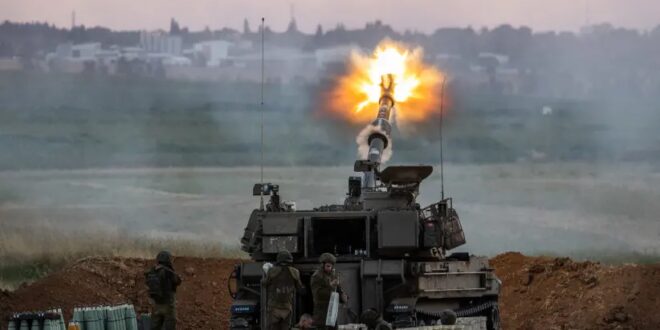 Biden to Netanyahu: ‘Wind down’ bombardment of Gaza

“I am sure that all the enemies around us see how costly it is to attack us, and I am sure they will learn the lesson,” Netanyahu said.

Israel plans to continue Operation Guardian of the Walls to strike at more high-quality Hamas terror targets, even as the US, EU and others push for a ceasefire, officials said late Tuesday night.

Their comments came as the Biden administration continued to encourage Jerusalem to wind down attacks against Gaza, a source told The Associated Press Tuesday.

Among the targets was Hamas’s Qassam Brigades commander Mohammed Deif, whom IDF sources said that they believe the military has a chance of eliminating if the operation continued.

Military sources said Deif had been targeted more than once during the last week of fighting, but had succeeded at the last moment to get away.

Defense Minister Benny Gantz said in a call with US Secretary of Defense Lloyd Austin on Tuesday that the operation will continue until Hamas is deterred for the long-term.

“The IDF’s military campaign will continue to the end of achieving long-term quiet,” Gantz said, pointing out to Austin that Hamas continues to fire rockets at civilian populations.

Netanyahu similarly said “we will continue as long as necessary to bring the quiet back to the citizens of Israel. I am sure that all the enemies around us see how costly it is to attack us, and I am sure they will learn the lesson.”

Gantz and Netanyahu’s remarks came as the US continued diplomatic efforts to bring about a ceasefire. The EU Foreign Affairs Council held a meeting on Tuesday, but failed to produce a consensus statement calling for a ceasefire.
A senior official in Jerusalem said that while the IDF has had major successes in striking Hamas, it has many more targets it wants to hit.

“When this ends, we want Hamas to have taken a really serious blow,” the official said, adding that the operation will continue “as long as we think we can inflict more serious punishment on Hamas and degrade their capabilities.”
The end goal of the operation is to “degrade Hamas’s will to start this kind of thing again soon.”

Asked if US pressure for a ceasefire is a consideration on whether to continue, the official said it is, but that “Israel has to reach its own decisions on its own national security with all the different ingredients looked at as a whole. As long as we think that Hamas still needs to receive a few blows, we still have goals, we will continue.”

A source close to the situation told the Associated Press Tuesday that US President Joe Biden and his administration told Prime Minister Benjamin Netanyahu and Israeli officials to wind down attacks on Gaza. The official said that Netanyahu and Israel were reminded by the administration that time is not on their side when it comes to international objections, and winding down Gaza strikes is in their best interest.

White House Press Secretary Jen Psaki said on Tuesday in a press gaggle aboard Air Force One that Biden’s objective is “to see an end to the violence on the ground, and to the suffering of the Israeli and the Palestinian people. As I’ve noted in the past, our focus and our strategy here is to work through quiet, intensive diplomacy. He’s been doing this long enough to know that the best way to end an international conflict is typically not to debate it in public… We see it as an ongoing behind the scenes discussion with our partners in Israel, with the Palestinian leader, with leaders in the region about how we can bring an end to the conflict.”

At the same time, Psaki said, “we also fully recognize it is up to the parties involved to bring an end to the conflict. And our objective is, for every statement we make, every action we take, everything we sign onto is going to have that objective in mind. We continue to believe that Israel has the right to defend itself. There have been more than 3,000 rocket attacks from Hamas, and more overnight into Israel. Civilians have lost their lives. Palestinian civilians have also lost their lives. And our goal is to get to the end of this conflict. We’re going to evaluate day-by day with the right approaches.”

US Secretary of State Antony Blinken spoke on Monday and Tuesday with UAE Foreign Minister Abdullah bin Zayed, Bahraini Foreign Minister Abdulatif al-Zayani and Moroccan Foreign Minister Nasser Bourita – countries that normalized ties with Israel last year – as part of American “outreach to halt the conflict in Israel and the West Bank and Gaza” and “to prevent further loss of life,” Blinken tweeted.

The EU held its Foreign Affairs Council meeting via teleconference, with serious divisions over what to include in its statements, which led to the meeting ending without a formal conclusion.

EU High Representative for Foreign Affairs Josep Borrell said Hungary was the only country to oppose an FAC statement, which can only be made by consensus.

The statement would have said the “priority is the immediate cessation of all violence and the implementation of a ceasefire,” Borrell said. “The priority is to protect civilians and give full humanitarian access to Gaza.”

In addition, he said: “We condemn the rocket attacks by Hamas and other terrorist groups on Israeli territory. We fully support Israel’s right to [self] defense, but we have also considered and stated it has to be done in a proportionate matter, respecting international humanitarian law.”

He also said that after a ceasefire, there must be a relaunch of engagement aiming at a two-state solution, saying “only a true political solution can bring peace.”

“The status quo is not an option, because violence will come again,” Borrell asserted.

Hungarian Foreign Minister Peter Szijjarto told AFP soon after the council meeting: “I have a general problem with these European statements on Israel… These are usually very much one-sided, and these statements do not help, especially not under current circumstances, when the tension is so high.”

The EU is Israel’s biggest trade partner and a big aid donor to the Palestinians. Some member states – led by Luxembourg, along with Belgium, Ireland, Malta, Finland and others – have called to do more to promote Palestinian statehood, including threatening economic sanctions on Israel.

Other countries, including Germany, Hungary, the Czech Republic, Austria, Greece, Cyprus and Poland have defended Israel’s interests. Austria flew an Israeli flag over the federal chancellery in Vienna on Friday.

France’s presidency on Tuesday called for a resolution at the United Nations Security Council to stop the fighting between Israel and Palestinian militants in Gaza.

“Overall, the 3 countries agreed on 3 simple elements: the shooting must stop, the time has come for a ceasefire, the U.N. Security Council must take up the subject and we have also called for a vote on a resolution on the subject,” the presidency said in a statement after talks between Emmanuel Macron, Egyptian President Abdel Fattah al-Sisi and Jordan’s King Abdullah.

The statement added that the three countries had also agreed to launch a humanitarian initiative for the civilian population of Gaza in conjunction with the United Nations.

It gave no further details.

Dendias said only that he discussed “developments in the region” with Ashkenazi and Shtayyeh, separately.

Ashkenazi said the visit reflected close ties and solidarity between the countries, and thanked Dendias for condemning Hamas rocket fire on Israel and supporting Israel’s right to defend itself.

Gantz spoke with his German counterpart, Annegret Kramp-Karrenbauer, and thanked her for Germany’s solidarity with Israel, condemnation of rocket attacks on Israel and support for Israel’s right to defend itself.

Foreign ministers of BRICS countries – Brazil, Russia, India, China and South Africa – held a teleconference on Monday night to discuss issues in the Middle East, including the war between Israel and Gaza.

“They called on both sides for an immediate end to the violence and strict observance of the norms of international human law,” a statement from the Russian Foreign Ministry read. “We emphasized the importance of an early restart of direct Palestinian-Israeli negotiations with the aim of a comprehensive and long-term solution of all issues of the final status on the basis of a two-state solution.”

The PA, the Organization of Islamic Cooperation and the Arab Group held a news conference in advance of Thursday’s UN General Assembly debate on Gaza that is not expected to include the passage of a resolution.

Palestinian Ambassador Riad Mansour said he expected the UNGA would have high-level attendance and would demonstrate “massive” solidarity with the Palestinians.

He took issue in particular with the United States’ decision to block a Security Council ceasefire statement condemning Israel-Palestinian violence, which spoke of hostilities in Gaza and Jerusalem but failed to mention the barrage of Hamas rockets launched at southern Israel.

“One country did not allow the UNSC” to issue a declaration, Mansour said. “Business as usual can not prevail in our region. To tell us, ‘be quiet, let us fix the Gaza Strip’ – that will not elevate us to what is needed,” Mansour said.
The Palestinians can not “continue to live under this [Israeli] apartheid regime,” Mansour said, adding that “this occupation has to end.”

Algerian Ambassador Sofiane Mimouni, who chairs the Arab Group, said conversations were still ongoing among UNSC members about the issuance of a ceasefire statement.

“We are fully aware of the politics on the UNSC, but we remain hopeful that the UNSC will fulfill its responsibility,” Mimouni said.

Post Views: 47
Previous Why does Hamas insist Israel-Gaza ceasefire include Jerusalem? – analysis
Next Drone shot down along Israel-Jordan border; Rockets fired from Lebanon