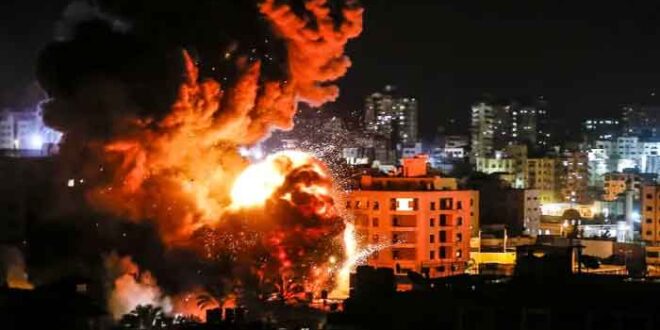 There seems no end to the Zionist carnage in Gaza. On May 16, 2021, the US blocked for the third time within a week a statement at the United Nations Security Council (UNSC) condemning Israeli violence against Palestinians and urging a ceasefire in Gaza. The blocked statement by the US was introduced by Norway, Tunisia, and China after an emergency Security Council meeting on Sunday. According to a draft obtained by “The Times of Israel”, the statement expressed UNSC’s “grave concern regarding the crisis related to Gaza and the loss of civilian lives and casualties, and called for de-escalation of the situation, cessation of violence and respect for international humanitarian law, including the protection of civilians, especially children.” If the provision of diplomatic support to Israel was not enough, USA approved the sale of $735 million in precision-guided weapons to the settler state.

The current cycle of Israeli terrorism started with protests in Jerusalem against the racist policies of the Zionist government, it escalated with the parallel threat of the ethnic cleansing of the Jerusalemite neighborhood of Sheikh Jarrah. The feeling of anguish and anger escalated in the streets of Jerusalem, as confrontations took place in Al Aqsa and the Ibrahimi Mosque, held as sacred symbols for Muslims across the world. On the asking of Palestinians, Hamas fired a number of rockets from Gaza at Tel Aviv. Israel responded with full force aerial bombardment of densely populated neighborhoods, displacing more than 38,000 Palestinians; the death toll reached over 200 in a week, including 60 children.

In spite of this intense violence, the imperialist countries and their stooges have kept portraying Palestinian death as a mere byproduct of Israeli vulnerability. While Israel is entitled to bomb an urban setting in impunity, Hamas is condemned for firing a number of rockets which cause little damage to a well-protected city. The attempts to transform the conversation on Israeli state violence to a series of stale talking points about Hamas rockets reflect the thorough dehumanization of Palestinians and the abject disregard for Israeli military aggression. This discourse ignores the fundamental fact that Palestinians are engaged in a struggle for national liberation against an extremely barbaric settler-colonial regime engaged in practices of racial and ethnic discrimination that fit the definition of the international crime of apartheid.

The present-day situation may appear hopeless. “The fact of the matter,” wrote Edward Said in 1979, “is that today Palestine does not exist, except as a memory, or, more importantly, as an idea, a political and human experience, and an act of sustained popular will.” However, this was not a pessimistic averment. As Said himself remarked 19 years later, “There is no getting away from the fact that, as an idea, a memory, and as an often buried or invisible reality, Palestine and its people have simply not disappeared. No matter the sustained and unbroken hostility of the Israeli establishment to anything that Palestine represents, the sheer fact of our existence has foiled, where it has not defeated, the Israeli effort to be rid of us completely.”

Two important points can be gleaned from Said’s statement. First, Palestine has not been erased from popular consciousness. In fact, what we have seen is the increasing use of Palestine as a symbol of global liberation from all kinds of oppressions. This has bolstered the international legitimacy of the colonized territory among the peoples of various countries and enhanced its symbolic power. Second, the mere act of Palestinian existence troubles Israel and forecloses the possibility of complete colonization. The current murderous campaigns by Israel are tired attempts to exterminate Palestinians who have long resisted Zionists through their steadfastness. Commenting on this steadfastness, Mahmoud Darwish wrote: “They wait, and waiting is steadfastness and a stand.” Through this steadfastness, Palestinians have presented the colonial power with an active, pulsating and vibrant force which, despite getting soaked in blood and indignity, continually refuses to be beaten into submission. This time, too, Palestine will keep resisting and struggling for life.