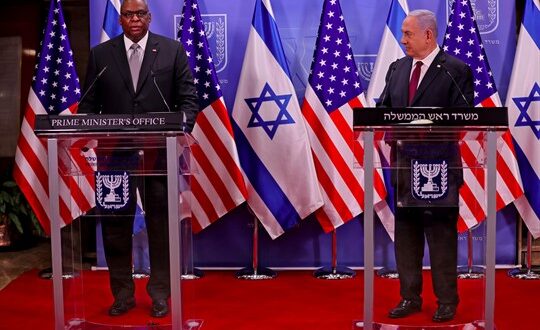 Israel Tries Its Hand at ‘Maximum Pressure’ on Iran

While tensions between Israel and Iran have been omnipresent in the Middle East for decades, the prospect of open military conflict between the two countries has never seemed closer than it does now. Over the past few months, the two rivals have escalated an undeclared naval war featuring unclaimed attacks on Israeli- and Iranian-owned ships. At the same time, Israel has continued its air strikes on Iranian weapons shipments transiting across Syria, and a damaging explosion on April 11 at Iran’s Natanz nuclear facility was widely attributed to Israel.

All of this comes against the backdrop of U.S. President Joe Biden’s efforts to hold talks with Iran in order to explore the possibility of reviving the 2015 nuclear deal or crafting a new agreement to rein in Iran’s nuclear program. With a delegation of senior Israeli national security and intelligence officials in Washington this week for talks with the Biden administration on Iran, the spotlight is shining brightly on Israel’s current approach to countering Iran and whether or not its disagreements with the U.S. on this issue can be managed.

Post Views: 66
Previous Is Iran Losing Its Grip on Its Proxy Militias in Iraq?
Next Netanyahu determined to continue Gaza operation despite pressure from Biden