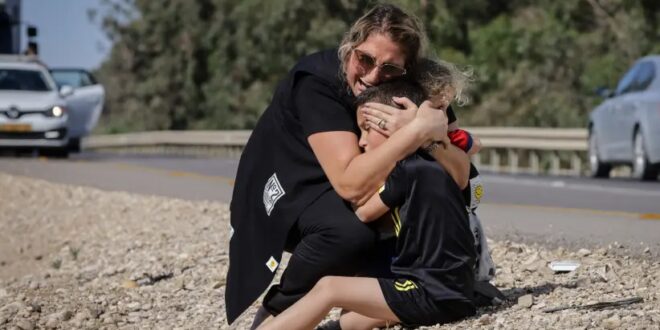 Netanyahu determined to continue Gaza operation despite pressure from Biden

Following a phone call between the leaders, the White House said that Biden “expected a significant de-escalation today on the path to a ceasefire.”

US President Joe Biden told Prime Minister Benjamin Netanyahu he expects Israel to move towards a ceasefire with Hamas on Wednesday, but Netanyahu said Operation Guardian of the Walls will continue until Israeli citizens are secure.

Following a phone call between the leaders, the White House said that Biden “expected a significant de-escalation today on the path to a ceasefire.”

“The two leaders had a detailed discussion on the state of events in Gaza, Israel’s progress in degrading the capabilities of Hamas and other terrorist elements, and ongoing diplomatic efforts by regional governments and the United States,” the White House readout stated.

Netanyahu said soon after that he is “determined to continue in this operation until its objective is achieved – to bring back the quiet and security to…citizens of Israel.”

Speaking after a meeting in the Kirya IDF headquarters, the prime minister said he appreciates the support of governments around the world, as well as from Biden for Israel’s right to defend itself, which he called “a natural right.”

Earlier Wednesday, Netanyahu said Israel does not have a set time by which it seeks to finish Operation Guardian of the Walls.

“We’re not standing with a stopwatch in our hand; rather, we are making sure to meet the goals of this operation,” Netanyahu said in a briefing to foreign ambassadors on Wednesday, responding to a question about when this round of fighting will end, according to a source in the meeting.

The possible responses to Hamas are to either conquer Gaza or to deter them, he added.

Netanyahu admitted that Israel “didn’t expect a wide conflagration” as tensions rose in Jerusalem earlier this month and Hamas used Jerusalem Day and the court proceedings on Sheikh Jarrah to incite violence, but that Israel made major efforts to de-escalate, including the unprecedented postponement of the Sheikh Jarrah ruling and rerouting the Jerusalem Day parade, as well as banning Jewish visitors from the Temple Mount.

The prime minister also showed a map of the Hamas tunnel network in Gaza City and Khan Yunis, which the IDF bombed last week.

“They built a whole infrastructure throughout Gaza of an underground tunnel network in order to enable them to stock their weapons, their missiles, their command posts, communication centers and their fighters and also to shoot from underground just from small piers that they have,” he explained.

“We try to target those who target us with great precision,” he said. “There is no army in the world that does more than the Israeli army, in the Israeli security services, in Israeli intelligence to prevent collateral damage. To have Israel criticized for that is absurd. Not only is absurd and unjust and untrue, it does enormous damage to democracies that are fighting this kind of evil.”

Foreign Minister Gabi Ashkenazi, who also took part in the briefing, said this round of fighting is different, because it is Hamas’s attempt to take over the Palestinian agenda and strengthen its political status.

“In recent weeks, I spoke with dozens of foreign ministers around the world, and I am convinced that there is a good understanding and international support for Israel’s need to fight Hamas terrorism,” Ashkenazi said. “We expect countries for which stability and peace in the Middle East is important to explicitly condemn Hamas, express support for Israel’s right to defend itself, put the onus for de-escalation on Hamas and designate Hamas [as a terrorist organization].”

The charges against Israel in the International Criminal Court “hurt any chance of regional developments,” Ashkenazi warned.

“Israel cannot take trust-building steps with the Palestinians when there is a threatening sword above us of cases against IDF soldiers and arrests abroad, and therefore, we have a shared interest in removing the charges from the agenda,” he stated.

On Tuesday, Rep. Rashida Tlaib (D-MN), a Palestinian-American whose grandmother lives in the West Bank, confronted Biden on the tarmac as he landed in Detroit to visit a factory, calling on him to do more to protect Palestinians and accusing Israel of committing “atrocities…with US-supplied weapons.”

Biden later said to Tlaib in his public remarks at the factory: “From my heart, I pray that your grandmother and family are well. I promise you, I’ll do everything to see that they are.”

French President Emmanuel Macron, Egyptian President Abdel Fattah a-Sisi and Jordanian King Abdullah Macron, Sisi and Abdullah called for an immediate ceasefire in a joint statement on Thursday
They said they would work with international partners, including the UN Security Council, to attain it, in a second joint statement in as many days.

They “expressed their deep concern regarding the developing escalation of tensions in the Middle East which has already resulted in too many casualties claiming the lives of many civilians, including children.”

The three leaders also said “the root causes” of the conflict must be addressed by resuming peace talks between Israel and the Palestinians based on a two-state solution.

In addition, they said they would work to ensure humanitarian aid is delivered to Gaza; Israel has already allowed such aid into Gaza, even as Palestinians repeatedly shelled crossings during those transfers, injuring an IDF soldier
France raised the possibility of a UNSC resolution at Tuesday’s meeting of the council.

The US blocked the UNSC from issuing a statement on the fighting four times in the past 10 days. Such a statement carries less weight than a UNSC resolution, which France is now proposing.

The UNSC has not passed a resolution on Israel since 2016, when it condemned Israeli settlement activity under Resolution 2334.

French diplomats said they believe that a UNSC resolution could raise pressure on the parties to end hostilities, adding that any action in New York would complement other diplomatic initiatives and they think there is a way to make the United States “evolve.”

The UNSC met four times on Israeli-Palestinian violence in the last nine-days; twice last week, followed by a public meeting Sunday and a closed door one on Tuesday.

At each meeting the 15-member body has discussed the issuance of a statement calling for a Gaza cease-fire. The draft bemoans violence against innocent civilians, but does not mention Hamas or its rockets.

The US blocked the issuance of a statement each time. Along with China, Russia, the United Kingdom and France, the US is one of five UNSC members with veto power.

Diplomats said US Ambassador to the UN Linda Thomas-Greenfield told the UNSC that Washington’s focus would continue intensive diplomacy to try and end the violence, noting there had so far been 60 high-level calls by senior US officials, President Joe Biden.

She added: “President Biden expressed support for a ceasefire.”

“We have not been silent and neither have you,” Thomas-Greenfield said, according to a UN diplomat familiar with her remarks.

“With regard to further Security Council action, we must assess if any given action or statement will advance prospects for ending the violence,” she said. “We do not judge that a public pronouncement right now will help de-escalate.”

Separately the UN General Assembly plans to hold a debate on the matter Thursday, at the requests of the Palestinian Authority, the Arab Group and the Organization of Islamic Cooperation.

Post Views: 67
Previous Israel Tries Its Hand at ‘Maximum Pressure’ on Iran
Next Israel’s Gaza bind – destroy Hamas or wait for the next war? – analysis