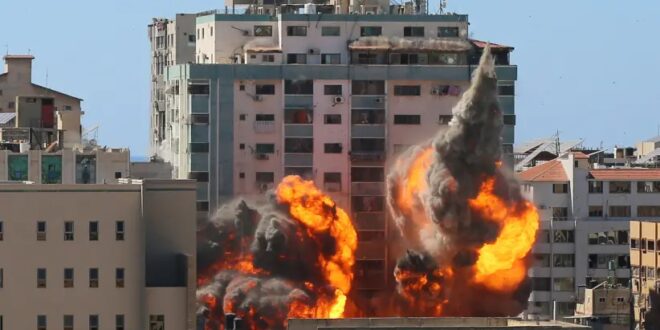 Israel’s Gaza bind – destroy Hamas or wait for the next war? – analysis

The ongoing situation has three possible resolutions, it’s just that none are viable at the moment.

Forget the last Israel-Hamas war – or in fact any of the past conflicts with the militant group that rules Gaza.

What is happening now is an entirely differently paradigm. In a way it is more akin to the 2007 coup, when Hamas ousted Fatah from Gaza so it could rule the Strip. Now that the Palestinian elections have been suspended, Hamas has taken a page out of its 2007 playbook to violently vie for leadership of all the Palestinian people.

All past three Israel-Hamas wars – 2008-2009, 2012, 2014 – involved issues with respect to Gaza that seemed intractable, and remain so. Starting, however, with the Great March of Return in 2018, Hamas broadened its agenda and demanded the right of return for refugees, one of the core issues with respect to the resolution of the Israeli-Palestinian conflict.

This month Hamas linked its firepower to the issue of Jerusalem, attacking Israel over the fate of Palestinian families in the east Jerusalem neighborhood of Sheikh Jarrah.

Prime Minister Benjamin Netanyahu’s moves in recent years bolstered Hamas and weakened the Palestinian Authority. He bypassed the PA to allow Qatar to send cash into Gaza to ensure calm, so that violence didn’t mar Israeli elections. This was followed by the normalization deals with four Arab nations that further sidelined the PA. Both moves unwittingly helped empower Hamas just as it was gearing up to make its move.

It’s unclear if the sudden drop in Hamas rocket fire and the more constrained IDF strikes are part of a gradual drift into a restoration of calm, or simply a lull, as Hamas gears up for a protracted conflict.

Either way, now or week from now, the best outcome one could hope for is a quiet, unpublished understanding by which both sides make some concessions. A more formal ceasefire would be impossible because Israel considers Hamas to be a terrorist organization and does not recognize it.

THE ACHIEVEMENT of calm will be trickier now than in the past, because the issue is no longer Gaza, where Israel could make concessions. There is little that Israel can give the terrorist group on Jerusalem; nor can it afford to have Hamas launch rockets each time there is an issue with the capital city.

Israel is pressing on now with its military strikes, in hopes that the weaker Hamas is, the more likely it is to agree to concessions.

Gaza rockets were not always the center of Israeli or world attention. Initially, when the Hamas rockets and mortars first flew into southern Israeli communities two decades ago, they were small projectiles limited to the Gaza border communities and Sderot. These days they can hit Jerusalem, the center of the country and beyond.

More significantly, however, as of May 2019, Hamas can rapidly fire rocket barrages at a pace that at times outstrips the ability of the Iron Dome system to contain it, bringing life in the targeted communities to a standstill. In addition, it can destabilize Israel by helping to incite riots between Israeli Jews and Arabs.

This newest war, known as Operation Guardian of the Walls, which began last Monday, only underscores the increased threat level and leads one to conclude that Hamas, if left unchecked, will eventually pose an existential threat.

THIS GORDIAN knot has three possible resolutions – it’s just that none are viable at the moment.

The first is peace. Since Hamas took over Gaza and ousted Fatah in a violent coup in 2007, the presumption had been that it would be tamed by a final-status agreement for a two-state solution, which still remains an option. For a two-state solution to work, Hamas would have to accept Israel or be swept aside by a governing body that did, presumably the PA.

But the absence of any peace process – and US President Joe Biden’s initial decision not to pursue one – has removed that option from the table for the moment.

The second is the union of Fatah and Hamas, which would allow the PA’s return to Gaza. It’s the least likely scenario since the PA has tried and failed over the last 14 years to reunite the two Palestinian factions.

“The big one-day [scenario] would be to create conditions to bring the PA back into Gaza, but that is very complicated,” said Shira Efron of the Israel Policy Forum and the Rand Corporation. “The PA doesn’t want to, if Hamas maintains its arms. Their condition is that there is only one [armed body].”

THE THIRD option is that Israel would embark on a ground campaign to destroy Hamas and restore its military rule of Gaza. It ended that military rule in 2005 when it pulled its troops and citizens out of the small enclave on the Mediterranean Sea.

“You can’t destroy Hamas without entering Gaza with ground troops,” said Brig.-Gen. (ret.) Michael Herzog, who is a fellow at the US-based Washington Institute. Such a military campaign would be financially expensive and cost Israeli lives.

“Then there is the dilemma of the exit strategy: Who do you turn it over to?” he asked.

Unless Israel embarks on that campaign with a clear vision of who would rule Gaza once it ended, it would simply trade the problem of rockets with those associated with the enforced IDF rule over two million Palestinian citizens in Gaza.
If Israel destroyed Hamas and pulled out, it runs the risk of a more extremist group taking charge of the Strip. Israel can’t bring the PA back to Gaza in that scenario, because it would strengthen the perception among Palestinians that the PA is a puppet government propped up by Israel.

THE VIOLENCE and the impossibly of these three scenarios have pundits and experts suddenly speculating on the need for a Gaza policy, although the matter itself was surprisingly not an issue in any of the last four Israeli elections since 2018.

“Israel has to think very hard about a strategy vis-a-vis Gaza,” Herzog said. “Hamas is a factor on the ground, whether we like it or not.”

In search of a Gaza strategy, there has been a sudden resurrection of past resolution strategies, in the hope that they could be used as leverage to placate Hamas into foregoing violence and rockets.

There could be an end to the Israeli-imposed Gaza border restriction. In this scenario, Israel would rescind all measures that prevent Gaza from economically thriving, essentially removing all limits on the movement of goods and people, in hopes that the price of a normative life in Gaza will prevent future clashes.

These restrictions were imposed after the 2007 coup, in hopes that Hamas would be weakened from within if Gaza failed to thrive economically. Fourteen years later, it could be time to revisit this policy, given that Hamas is still in power.

ANOTHER option would be shore up the PA by allowing it to take the lead on a Gaza policy, to offset Hamas empowerment. For example, rather than helping Hamas with bypass options, such as Qatari cash, Israel would deal only with the PA, to force dependency on Fatah for necessities.

Israel and the international community could trade limited incentives for quiet or even an agreement to partially demilitarize or not to rearm. Such steps could be tied to reconstruction projects, said Herzog, noting that Israel is in a position to set such terms.

As part of those incentives Israel could revive the project for an offshore port. A few years ago, Finance Minister Israel Katz (Likud) proposed an island port for Gaza that would also include utility installations for electrify and water. Among the benefits of such a project is that it would remove the Gaza utility from a conflict zone, thereby allowing the international community to feel more secure about its investment, knowing that it would not be bombed by Israel should conflict break out.

Israel could take a hard-line approach, by which basic services and humanitarian assistance would be directly linked not just to an understanding to refrain from violence, but also to steps taken toward demilitarization or at the very least a pledge not to rearm. This could also include a demand for the return of the remains of the two soldiers and the release of the two captives held by Hamas. But this would be likely only if IDF retaliation weakened Hamas more than seems to be plausible at the moment.

LASTLY, ISRAEL could engage and build ties with Hamas by way of normalizing the organization, rather than dismissing it as a terrorist group, particularly given its popularity among Palestinians. This is also unlikely to happen. It has little support in Israel, but it is one way to change the paradigm.

But all these scenarios, save for possibly the last one, speak to a past reality that may no longer be relevant. For a group that is advocating for getting Jerusalem, the offer of an island port suddenly seems tame and less central to overall objectives, which now are focused on a Palestinian leadership position that would allow Hamas to seize control of navigating the conflict with Israel.

Netanyahu and Defense Minister Benny Gantz sound like they are in control of the situation when they speak broadly of military objectives against Hamas, but these at present do not involve destroying Hamas. Nor can either leader provide an alternative exit plan for the ever-growing Gordian knot of Hamas and its rockets.

It’s a problem that has become particularly acute, given that the international community increasingly perceives the situation as one in which Israel is the aggressor and Hamas is the victim.

At best in this round, Israel can hope to kick the problem down the road a few years, but not even for a decade. If the Abraham Accords which normalized Israeli-Arab ties seemed to make the Israeli-Palestinian crisis irrelevant, Gaza suddenly reminded everyone of its importance.

At the end of the day, sooner rather than later – if the conflict is not resolved and the Palestinians themselves do have a leadership that can incorporate Hamas – Israel may simply be delaying the inevitable.

The question increasingly is less how to contain Hamas and more about when that next war will be and whether that will be the war where Israel may be forced to move to eliminate Hamas altogether, by moving its army back into the Strip.

In an interview with the Hebrew website Ynet, Energy Minister Yuval Steinitz said, “We will have no escape one day from a temporary takeover of Gaza…. I think this day will come, if not now then in the coming years.”