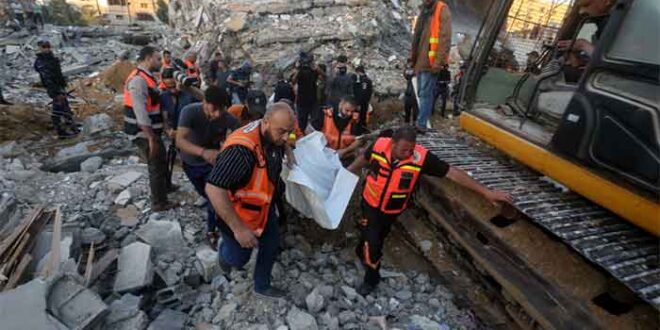 From 6th May 2021 while Hamas, a radical Palestinian group has launched missiles on Israelis on the issue related to Al Aqsa mosque, the Israel has launched close to a full scale attack on Palestinians. In this conflict the causalities and destruction has been more on Palestinian side, death of nearly 200 people including 60 children, while on Israeli side ten people including one child have lost their lives. The destruction of buildings housing media centres in particular by Israel is a grave and tragic event.

The perpetual Al Aqsa mosque issue has been projected to be the cause of these acts. The major issue of installing Zionists and carving out Israel as an outpost of America near the oil rich zone of the World needs to be understood. The creation of Israel after the second World war, on the ground that Jews need a country of their own as they have been tormented in different countries was the pretext in which the US and Britain in particular planned the area for the Jews in Palestine. As such Israel is a case of settler colonialism, military occupation and land theft.

Palestine has been a country for long. It is not only the Muslims who have been the citizens of this country. In addition to Muslims, Christians and Jews have also been the part of the citizenry of Palestine. The area carved out for Jews, and linking it to historical roots of origins of Judaism in this area was the logic proffered for the same. Jerusalem has been the centre of importance for three Abrahmic religions, Judaism, Christianity and Islam.

As such the first global meet of Jews, lead by Zionists had taken place in 1897 in Germany. They asked for a separate state for Jews. Let’s first understand the difference between Zionism and Judaism. Judaism is a religion of Jews, while Zionism is a politics in the name of Judaism. This is quiet akin to Islam as a religion and Islamic Fundamentalism (Taliban for e.g.) or Hinduism as a religion and Hindutva as politics. While the meeting passed the resolution for a separate country for Jews, there was a great opposition to this resolution from large section of Jews scattered all over. Their argument was that with such a resolution the Jews will face discrimination and Jewish traders will have to face many problems in their professional life.

The attempt for Jewish state got another shot just before the World War I. The German holocaust which targeted Jews gave another shot in the arms to the idea of separate state for Jews. Many of the Jews from Germany itself were opponents of this idea, as they realized that such a state built around the identity of one religion will become as authoritarian and oppressive to other identities as Germany herself became with Nazis in power.

The formation of Israel took away lots of territory of Palestine. And Lakhs of Palestinians were forced to leave their home and hearth. The newly formed state was armed to the teeth, particularly by America. The idea was very clear that Western Imperialist powers were keen to have a place of strategic importance in West Asia. More so when the politics of control over oil resources began these powers articulated that ‘oil is too precious a commodity to be left to Arabs’. On one hand the US-Britain had designs to strengthen Israel on the other the affluent Jews control many of the power centres within America in particular.

After 1967 attack by Israel, it grabbed large tracts of Palestine. This led to lakhs of Palestinians becoming refugees in near by countries. The atrocious, aggressive behaviour of Israel was opposed by UN. Through various resolutions UN had been calling for giving justice to Palestinians and urging Israel to withdraw from the areas occupied illegally. Israel defied most of UN resolution. Israel could get away with violation of global and human norms mainly because America has been backing it thoroughly.

Religion has no role to play in this dynamics. The real issue is the control of oil resources and military-political domination in the area. Recently UN Security Council wanted to pass a resolution calling for cease fire by both sides. America with its veto power blocked it and Israel’s defence minister stated that the war will go on till they achieve their goal.

Anti Israel demonstrations all over the World are underway. There is a call for a halt to the attack by Israel. There is no justification for the shelling by Hamas, but in such an oppressed and tortured community few extremist groups do come up and get nurtured because of the extreme injustices hurled on a particular community.

India has consistently taken a Pro Palestine position all through. Starting from Mahatma Gandhi who wrote, “my sympathy for the Jews does not blind me to the requirements of Justice. It is wrong and inhuman to impose the Jews on the Arabs’, down till the leaders like Aral Bihari Vajpayee and Sushma Swaraj who took a pro Palestine position and criticised the Israel’s occupation of Palestinian land. Lately with the sectarian nationalism growing in India, Indian Government is tilting towards Israel, and demand justice for Palestinians is taking a back seat.

The area has been a hot spot from last several decades. It is time that all the global powers follow the resolutions of United Nations and restore to Palestinians their rightful land and rights. We can’t ignore the rise of Israel as a country also. Keeping in mind the current realities; a solution for demarcation between Palestine and Israel by United Nations needs to be done and adhered to. The gross violation of human rights of Palestinians is a matter of worry for all those looking forward to a peaceful world order. For this America-imperialists should be made to overcome their ambitions of controlling the lust for oil-power and favour justice for all the people of Middle East.