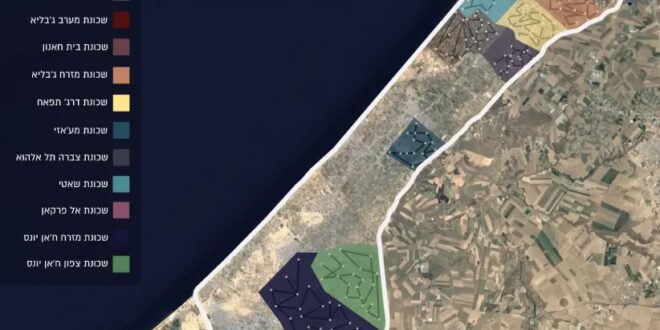 New illustrations show exactly how Hamas terrorists have managed to build elaborate infrastructure within the heart of the densely crowded civilian neighborhoods in the Gaza Strip.

Over the last decade, Hamas has invested millions of dollars into digging extensive tunnel infrastructure below the surface of the Gaza Strip, according to the IDF Spokesperson.
The tunnels are used by Hamas to ambush the enemy and carry out counter-offensive operations as displayed in Hamas’ live footage of the network below, all with the aim of causing as much harm to civilians as possible.

Much of Hamas’s infrastructure is built in the heart of crowded civilian areas in the Gaza Strip, which means that military targets, including command and control centers, weapons production, weapons depots, military infrastructure, shafts for terrorist tunnels and combat management centers are all inside of civilian neighborhoods.

As part of Operation Guardian of the Walls, the IDF has caused substantial damage to the tunnel system known as the “Metro,” in order to set Hamas plans back as far as possible.

The IDF acts in accordance with international law and takes as much precaution as possible to reduce harm to civilians during its operational activities.

Post Views: 123
Previous The sad saga continues: occupation and oppression of Palestinians
Next Israel faces predator in Hamas and Iran must be held accountable – opinion