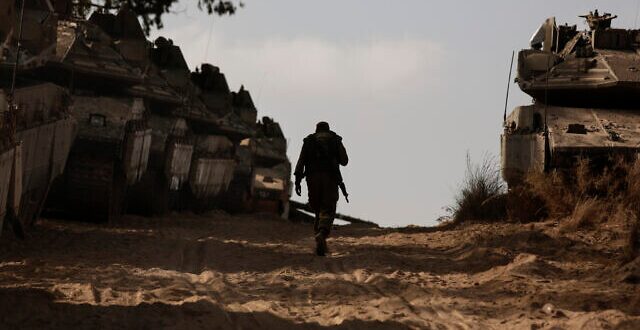 Israel’s high-level security cabinet voted in favor of a ceasefire in Gaza Thursday night, potentially bringing an end to 11 deadly days of hostilities with the Hamas terror group.

A statement from the Prime Minister’s Office said that the security cabinet had “unanimously accepted the recommendation of all security officials, the IDF chief of staff, the head of the Shin Bet, the head of the Mossad and the head of the National Security Council, to accept the Egyptian initiative for a bilateral ceasefire without any conditions, which will take effect later.”

At the same time, the statement added, “the political leadership emphasizes that it is the reality on the ground that will determine the future of the operation.”

Following the meeting, a Hamas official confirmed to the Reuters news agency a “mutual and simultaneous” ceasefire with Israel had been reached.

Senior Hamas official Osama Hamdan told the Lebanese Al-Mayadeen news channel that the ceasefire will go into effect at 2 a.m.

However, violence continued despite the announcement.

One person was lightly injured when a mortar shell hit a print shop in the community of Be’eri near the Gaza border, Israeli authorities said.

The shell directly hit the building, according to Fire and Rescue Services. The victim is 53 years old and was being taken to a nearby hospital for treatment, medics said.

Several salvoes of rockets and mortars were fired at communities near the border.

Palestinian media said the IDF was carrying out strikes in Gaza. There was no confirmation from the army.

Earlier, Hamdan said that Hamas had received assurances regarding Israeli policy toward Sheikh Jarrah and the Temple Mount in East Jerusalem.

Palestinian terror groups have tied the hostilities in Gaza to unrest in Jerusalem connected to both prayer on the Temple Mount during the Muslim holy month of Ramadan and the pending eviction of a number of Palestinian families from the Sheikh Jarrah neighborhood.

“The resistance has forged a new equation and a new victory,” Hamdan said.

The statement from the PMO said that defense officials had “reviewed with the ministers Israel’s great achievements in the campaign, some of which were unprecedented.”

The officials told the ministers that Israel had “exhausted” all of its possible military achievements in the conflict with Palestinian terror groups in Gaza, according to the Ynet news site.

“Hamas is deterred and suffered serious blows,” an official was quoted as telling the ministers.

In a statement released after the meeting, Gantz cheered the Israel Defense Forces, praising the “unprecedented military achievements in terms of forcefulness, precision and strategic importance in the fight against terror groups in the Gaza Strip” during the battle, dubbed Operation Guardian of the Walls.

Gantz said the army remained on high alert for additional attacks from Gaza and, echoing the PMO statement, said “the reality on the ground will determine the continuation of the operation.”

Shortly after the meeting, rocket alert sirens went off in Israeli communities near the Gaza Strip, signaling that Hamas was planning on continuing to fire rockets at Israeli cities until the 2 a.m. deadline.

The alarms were heard in the communities of Netiv Ha’asara, Erez and Yad Mordechai. There were no immediate reports of injuries.

The ministerial panel convened shortly after 7 p.m. against the backdrop of dozens of rockets fired from Gaza Thursday and continued strikes by the IDF in the coastal enclave.

Hamas and other Gaza terror groups launched nearly 3,700 rockets at Israel since May 10, at times forcing people living near Gaza into bomb shelters around the clock. Israel, in response, carried out an extensive bombing campaign in the Gaza Strip.

Gaza’s Hamas-run health ministry says 232 people, including more than 66 minors, have been killed by Israeli strikes over the past 10 days. According to the IDF, more than 120 of those killed were members of Hamas and over 25 were members of the Palestinian Islamic Jihad as of Monday night. The IDF also says some of the Gaza civilian fatalities were killed by the terror groups’ own rockets falling short and exploding in Gaza.

Twelve people in Israel, including a 5-year-old boy and a 16-year-old girl, have been killed in rocket fire, and hundreds have been injured. Hamas and other Gaza terror groups have fired over 4,000 rockets and other projectiles at Israel.

The ministerial meeting came amid mixed reports about the progress of ceasefire talks to end hostilities. According to Al-Jazeera, Israel had informed Egypt — which was mediating the talks between the Jewish state and Hamas — that it was willing to halt its military campaign.

Talks continued after US President Joe Biden urged a “significant de-escalation” by the end of Wednesday while Netanyahu vowed to push on until the military campaign reaches its objective — “to restore quiet and security” for Israelis.

The US, a key Israel ally, has repeatedly blocked the adoption of a joint UN Security Council statement calling for a halt to hostilities, saying it could undermine efforts to de-escalate the crisis. Earlier this week, France began circulating a Security Council resolution calling for an immediate ceasefire.

Shortly before the announcement of the ceasefire, the White House said that President Joe Biden spoke earlier Thursday with his Egyptian counterpart, Abdel-Fattah el-Sissi.

A statement said that the two leaders discussed “efforts to achieve a ceasefire that will bring an end to the current hostilities in Israel and Gaza.”