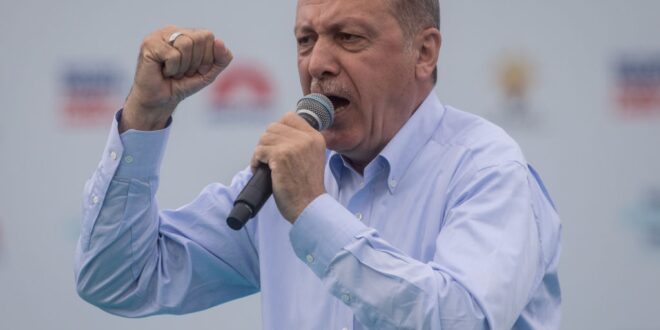 According to Hamas’s charter and statements by its leaders, its aim is the destruction of Israel, genocide of the Jewish people, and replacing the state with an Islamist one. This, a religious war, is the real reason Hamas and its enablers are conducting an unprovoked, jihadist assault against Israel. The tweets posted by Turks calling for further attacks against Jews just reaffirm the repeated vow of Turkish President Recep Tayyip Erdogan to “reconquer” Jerusalem, which was part of the Ottoman Empire, as part of a new caliphate for Islam.

Israeli civilians have indiscriminately been targeted by the rockets of Islamist terrorist groups in Gaza for more than a week now. Hamas and Palestinian Islamic Jihad have fired more than 3,000 of them at Israel since the outbreak of the war on May 10, according to the Israel Defense Forces. Ten people in Israel, including a young child, have been killed in the rocket fire, and hundreds have been injured.

As Tel Aviv was bombed by terrorists based in Gaza on May 11, the Turkish users filled Twitter with Jew-hating posts, calling for more bombardments and murders of more Jews. Some Twitter users, celebrating the attacks and praying for more, shared photos of fires and explosions caused by rockets not intercepted by Israel’s Iron Dome missile defense system.

The Turkish news website Avlaremoz reported these posts. Some include:

On May 10, the Twitter account of the Turkish Chief Rabbinate Foundation – Turkish Jewish Community issued a statement expressing their respect for “all Abrahamic religions” and calling for “a peaceful resolution” in Jerusalem rather than violence. The statement said:

In return, they received incitements to violence against Turkish Jews and Israel. According to Avlaremoz, such as:

One Twitter user referred to the seventh-century Muslim massacre against Jews in Khaybar in Arabia, and the Muslim Sultan Saladdin, who invaded Jerusalem in the twelfth century:

The continued war against Israel is blamed by some in the West on Israel, allegedly because of disputes over the ownership of several homes in Jerusalem, and the response of a few rogue Israelis (immediately condemned by Israeli Prime Minister Benjamin Netanyahu) to riots on the Temple Mount near the al-Aqsa Mosque.

The truth, however, is that the disputed homes are owned justly by Jews, who have legal documentation of their ownership going back to the 19th century. The Arab squatters who reside in them have refused to pay any rent since the 1980s. The Israeli Supreme Court has not yet ruled on whether the owners can evict the families who “squat” on the properties. As for the al-Aqsa mosque, it was used as a place from which to initiate violent attacks, so the Israeli police had to respond.

Sadly, it will not be possible to make an agreement with Hamas that will ensure lasting peace. In Islam, no agreement may extend for more than 10 years, as Mohammad did with the Quraysh tribe at Hudaibiya, and even then, it is meant only to provide time to strengthen the jihadi army, and be broken after a few years as Mohammad did. The best one can hope for is a temporary cease-fire, called a hudna, or calm.

The Turkish media’s coverage of Hamas is unimaginably distorted and biased against Israel, and attempting to stoke even more hatred against the Jewish people. When Turkish anti-Semites on Twitter are calling for more murders of Jews and destroying Israel, they are well aware that Israeli civilians are being targeted by Hamas rockets. They openly celebrate it. When the Turkish Jewish community calls for “peace” and “embracing each other” rather than “using violence,” that is not enough for these anti-Semites. This week, Turkish Jews were condemned for “not openly condemning Israel;” for “crying crocodile tears” and for supposedly hatching secret schemes.

Facts, for the anti-Semites, do not matter. The Palestinian Arab leadership has rejected offers for a state at least six times — in 1937, 1948, 1967, 2000, 2008 and in 2020 — in the last 90 years. All of the offers were either made or accepted by the Jews. The main thing keeping the Palestinian leadership stateless seems an unwillingness to share land. In Islam, any land that has once been under Muslim rule, such as with Spain (al-Andalus), must be under Muslim rule, held in trust for Allah, forever.

On September 12, 2005, for instance, Israel completed its unilateral withdrawal from Gaza, hoping that such a gesture for peace might lead to a peaceful resolution of the dispute. Less than two weeks after the Jews left Gaza, however, on September 24, 2005, the Palestinian Arabs in Gaza continued using it as a base from which to fire their post-disengagement rockets into Israel. In January 2006, in a free and fair election, Hamas won majority of seats in Palestinian legislative elections. Palestinian rocket attacks then continued.

According to Hamas’s charter and statements by its leaders, its aim is the destruction of Israel, genocide of the Jewish people, and replacing the state with an Islamist one. This, a religious war, is the real reason Hamas and its enablers are conducting an unprovoked, jihadist assault against Israel. The tweets posted by Turks calling for further attacks against Jews just reaffirm the repeated vow of Turkish President Recep Tayyip Erdogan to “reconquer” Jerusalem, which was part of the Ottoman Empire, as part of a new caliphate for Islam.