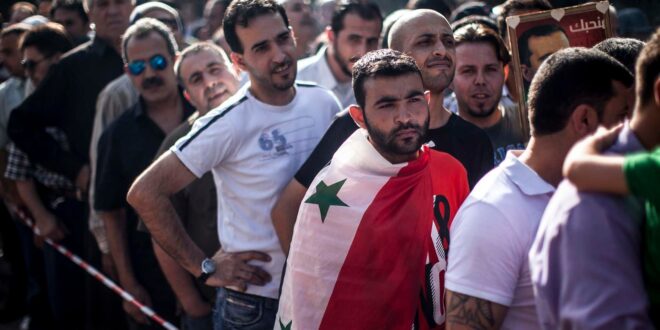 Despite the Sham, Syria’s Election is Still Significant

In the face of international pushback, the Assad regime is going forward with plans for a presidential election on May 26. While the outcome is in no way uncertain — Assad will win amid deeply unfair election practices — the decision to proceed with the vote has major implications for international efforts to resolve the decade-long civil war. USIP’s Mona Yacoubian looks at how the election might affect the situation on the ground in Syria, what it means for the U.N.-backed Geneva peace process and how the Assad regime’s renewed stranglehold on power could affect regional tensions and U.S. interests.

As in past presidential elections under the Assad regime, the May 26 vote is expected to be uncompetitive and rigged. Is there any significance to the vote and what, if any, impact could it have on the ground in the decade-long civil war?

Assad’s victory is a foregone conclusion in what can only be described as a “sham election.” To be eligible to run, candidates must have lived in Syria continuously for the past 10 years, depriving opposition leaders in exile from running in the election. As such, no credible opposition figure is competing in the election. Moreover, millions of Syrians are unable to participate because the election is only being held in regime-controlled areas of Syria. Four million Syrians live in northern Syria under some variant of Turkish control, while more than 3 million Syrians live in areas of northeast Syria under the control of the Kurdish-led Autonomous Administration. Meanwhile, Syrian refugees and expatriates face different challenges. Some may face obstacles to voting given voter registration requirements and embassy/consulate locations. Others, particularly Syrian refugees in Lebanon living in harrowing circumstances, face pressure to vote. Beyond these coercion, suppression and exclusion tactics, Syrian presidential elections over the past several decades have always produced the same result: An Assad — whether Hafez or his son Bashar — always wins. (The first multi-candidate elections were held in 2014.)

The election itself will not have any impact on the conflict’s trajectory, as power dynamics on the ground will remain largely unchanged. The 10-year Syrian war has now settled into what will likely be a protracted, violent stalemate. However, Russia — one of Assad’s key backers — undoubtedly will redouble its efforts to seek regional and international credibility for the Assad regime following the presidential election. Moscow will exploit Assad’s victory to trumpet Assad’s legitimacy and lobby for his regime’s acceptance by the international community. In particular, Russia will focus on gaining Syria’s re-entry into the Arab League and attracting reconstruction funding from the Gulf, two key objectives of Russia’s endgame in Syria. Earlier this month, the Saudi intelligence chief met his Syrian counterpart in Damascus, a development tied to the thaw in relations between Iran and Saudi Arabia, but which might also foretell a move to allow Syria back into the Arab League.
What does this mean for the Geneva process and other international efforts to bring a resolution to the conflict?

Unfortunately, the Syrian presidential election — conducted without a U.N. mandate and lacking the United Nations’ imprimatur — significantly undermines the Geneva process, deepening its obsolescence. The Geneva process embodied by U.N. Security Council Resolution 2254 envisions the drafting of a new constitution followed by free and fair elections under U.N. supervision. The Assad regime has consistently refused to cooperate with the Geneva process, now opting to forge ahead with unfair elections that will cast further doubt on the viability of the Geneva process as currently structured. Instead, conflict resolution efforts likely will need to pivot away from Damascus-based diplomacy to a new negotiation architecture that convenes key external powers wielding influence on the ground in Syria to discuss the outlines of a sustainable settlement.

In addition, with the July 10 deadline looming to renew the sole remaining U.N. border crossing into Syria — which allows crucial lifesaving assistance to reach Idlib — Russia may leverage the election to double down on its demands that Syrian sovereignty be respected, further complicating an already difficult negotiation to maintain the critical crossing. A Russian veto on maintaining the crossing — which has been repeatedly threatened by Moscow — would have catastrophic humanitarian impacts.
With Assad’s stranglehold over the country largely secured, how could the election impact regional tensions and U.S. interests and allies?

As with internal Syrian conflict dynamics, the election itself is unlikely to impact regional tensions. Yet with Assad entrenched in power, his Russian and Iranian allies will remain embedded in Syria — with important implications for the region. Syria will continue to be an arena for the shadow war between Israel and Iran, with the potential for flashpoints to escalate. At the same time, Iranian-backed forces could seek to exacerbate ongoing hostilities between Israel and the Palestinians. On May 15, three rockets were fired from Syrian territory toward Israel. While no casualties were reported, the incident underscores the inherent threat of a widening conflict at a moment of heightened tensions in the region.

Russia’s deepening role in Syria also has implications for the United States, which maintains a small footprint in northeast Syria. U.S.-Russian tensions have occasionally flared given the proximity of their ground forces in northeast Syria. Against a backdrop of growing friction in U.S.-Russian bilateral ties, Russian troops have violated established deconfliction processes with increased frequency according to the most recent inspector general’s assessment of Operation Inherent Resolve. Russia accused U.S. forces of ignoring deconfliction protocols in a May 13 incident when Russian forces turned back a U.S. military convoy.

Meanwhile, the United States’ European allies on the U.N. Security Council have also rejected Syria’s May 26 presidential election as unfair. Both the British and French U.N. ambassadors have issued statements that reject any political legitimacy accorded to the vote. However, some European countries, particularly those fearful of new refugee flows, as well Gulf Arab allies, may well be tempted to accept the Syrian vote despite its lack of legitimacy.