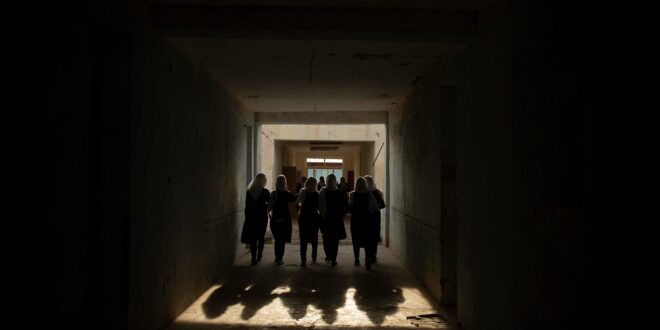 Without a large military footprint, can the United States help Afghan women and minorities protect their rights?

For the Dasht-e-Barchi neighborhood of Kabul, home to the Hazara minority group, the devastating May 8 bombing outside a school is part of a disturbing trend of attacks in the area. The bombing killed at least 85 and injured around 150 — mostly young girls — and coincided with concerns of escalating violence as the United States withdraws combat troops from Afghanistan. Although no group has claimed responsibility, the Islamic State group (ISIS) has perpetrated similar attacks in the past and many suspect it was again responsible.

USIP’s Belquis Ahmadi and Fatema Ahmadi look at the implications of this attack on the peace process, how it has impacted the Hazara community and what the United States and international community can do to help protect the gains Afghan women and minorities have made in the last 20 years.
Although attacks like this are all too commonplace in Afghanistan, what is the significance of the May 8 bombing amid the withdrawal of foreign troops?

Belquis: The bombing of the Sayed Al-Shuhada school in Dasht-e-Barchi in West Kabul was deliberate, coordinated and planned for maximum impact. It targeted young Hazara girls in a neighborhood where the majority of households live below the poverty line. Although no group claimed responsibility for the attack, and the Taliban denied involvement, Afghan President Ashraf Ghani laid blame on the militant group, saying it demonstrated they did not earnestly seek a political settlement to Afghanistan’s conflict. In recent years, ISIS has claimed responsibility for these types of attacks on Hazaras.

The attack on girl students demonstrates the vulnerability of religious and ethnic minorities as Afghan security forces are spread thin in the fight against the Taliban while foreign troops withdraw. The increased violence in the country affects all Afghans’ lives, but especially women and children. Attacks on civilians demonstrate that the Taliban and other terrorist groups will continue to use violence to achieve their aims. By attacking schools, these spoilers want to take away girls’ right to education.

If there is a lesson to be learned from this tragic incident and other past attacks, it is that Afghan girls continue to demonstrate their resiliency by going to schools and universities, even if it means risking their lives.
What, if any, implications are there for the peace process?

Belquis: Rising violence will further undermine and complicate the peace process. Local communities, particularly religious and ethnic groups, will likely take matters into their own hands. The Hazara community in particular has been targeted repeatedly by ISIS and feels that government security forces have not done enough to protect them. There is an emergent incentive among some Afghan groups to establish self-defense militias, which could lead to greater political fragmentation and has disturbing echoes of the ethnic factionalism that drove the 1990s civil war. Former warlords, local militia commanders and new groups have begun arming their supporters in preparation for a much-deteriorated security situation.

More violence will reduce the chances for peace or reconciliation. Generally speaking, the Taliban benefit from ethnic divisions within the Afghanistan republic. The more united a party is in a peace process, the more power they have at the table. Both the Afghan government and Taliban are seeking to divide their opponents. But the Taliban are a more homogeneous group, which makes their task easier.

On the other hand, the issue of education does unite different factions within the Afghan republic. Different regions of the country have different attitudes toward girls’ education, but there is a strong national consensus outside of Taliban circles that all girls should have access to education. The bombing is seen by most Afghans as an atrocity and as an unacceptable attack on girls’ right to education.

If the Taliban continue to ignore calls for a cease-fire, they are undermining their own cause. Indeed, the Taliban hated their pariah status prior to the U.S.-Taliban agreement and now enjoy being seen as respectable interlocutors. The international community could decide to oppose further prisoner releases, stop engaging the Taliban at senior diplomatic levels and keep U.N. sanctions in place if they continue to enable attacks and deny women and girls their basic rights, including the right to equal education.
Can you explain what the situation is like on the ground and how this attack has reverberated throughout the Hazara community?

Fatema: These kinds of attacks reinforce the idea among the minority Hazara ethnic group that it’s facing an ethnic cleansing campaign, or that there is a lack of concern from the Afghan state over their wellbeing. For example, the principal of the Sayed Al-Shuhada school requested months ago that the Ministry of Education help provide armed guards amid threats and other educational centers in the area being attacked. Hazara activists are sharing on social media related stories, scenarios, political speeches and past experiences to show that there is a link between the school attacks in West Kabul and systematic discrimination against the Hazara community more broadly throughout the country.

The attack has also led to increased fears of vulnerability among Hazaras as international forces withdraw. Hazaras — a Shia, Dari-speaking minority ethnic group in Afghanistan — have long been persecuted by the Taliban. Like other minority groups, Hazaras saw international troops as a buffer against militant attacks. But many now feel abandoned.
How can the United States and international community help limit such attacks and preserve the gains women have made over the last two decades in the absence of a large military footprint?

Belquis: The Afghanistan of today is very different than the Afghanistan of 20 years ago. The Taliban can’t just expect to take over and impose their anachronistic worldview on Afghans like they did in the 1990s. But honoring the sacrifices and hard work of Afghan men and women to assert their constitutional, social, political and economic rights equates with protecting the Islamic Republic of Afghanistan and its constitutional order that enabled the hard-won gains.

A top priority will, therefore, be to support the Afghan government, and the Afghan National Security Forces (ANDSF) in particular, to prevent major and rapid Taliban military gains that could create a domino effect leading to the collapse of the government. This requires the United States to keep NATO allies engaged and to maintain robust levels of military assistance for support to ANDSF against major Taliban offensives.

The attack on the school in West Kabul shows how the Taliban’s insurgency creates a vector for terrorist atrocities by a variety of groups. Because the Taliban keep the ANDSF on their heels and create ungoverned spaces, it provides its own militants and other terrorist groups with ample opportunity to attack Afghan forces and civilian targets. The 2018 Elie Wiesel Genocide and Atrocity Prevention Act calls for U.S. government efforts to “enhance the capacity of the United States to prevent and respond to atrocities worldwide.” In this vein, even as the U.S. troop presence dwindles, the United States should use whatever leverage it can to prevent mass killings like the May 8 bombing from happening again.

There is a larger lesson for the United States and Afghanistan’s neighbors as well: If the war is not controlled, and a political solution is not reached, the next target can be Islamabad or Washington or London, not an Afghan girls’ school in Kabul.

None of Afghanistan’s neighbors or regional actors want to see the restoration of an Islamic emirate, or a descent into civil war. The “Troika Plus” (the United States, Russia, China and Pakistan) issued a strong statement in this regard, and the Iranians have also repeatedly made this clear in official statements.

The U.S.-led Afghan peace process has done a great deal to legitimize the Taliban, which the Taliban are adept at leveraging, and which they value tremendously. International messaging should continue to focus on the fact that if the Taliban have dominance in potential power-sharing arrangements, and try to oppress Afghan citizens, especially women and minorities, they will quickly regain pariah status.

Finally, the deteriorating security situation combined with the devastating impact of the drought will require significantly more resources and preparation for humanitarian response programming in both government- and Taliban-controlled areas. This means committing new money and not simply releasing the $300 million that the United States had already committed but then withheld, as well as having the World Bank convene a donor conference to discuss funding priorities that major donors should support, and the best mechanisms to provide support.

Post Views: 101
Previous Pathways to Peace in Mozambique
Next Is the Biden Administration an Enemy of Israel and the Free World?

The terrorist group that calls itself the Islamic State Khorasan Province, or ISIS-K, provided one …