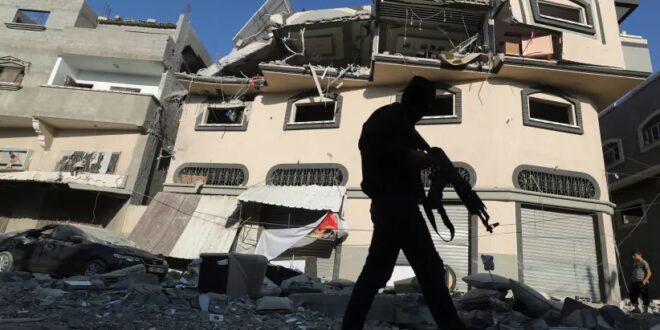 Palestinian Islamic Jihad: 19 of our men killed by Israel

The PIJ’s military wing, al-Quds Brigades, said in a statement that its members were killed “while performing their Jihad (holy war) during the ‘Sword of Jerusalem’ battle.”

The Palestinian Islamic Jihad (PIJ) organization announced on Saturday that 19 of its members were killed during the 11-days of fighting between Israel and the Gaza-based terrorist groups.

The Hamas-run Health Ministry, meanwhile, announced that 243 Palestinians were killed and more than 1,900 injured during the fighting with Israel. It said that the victims included 66 children and 39 women.

It was not clear whether the figures included Hamas and PIJ members.

The PIJ’s military wing, al-Quds Brigades, said in a statement that its members were killed “while performing their Jihad (holy war) during the ‘Sword of Jerusalem’ battle.”

Photos of the slain PIJ members dressed in military uniform appeared in the statement published by the al-Quds Brigades.

“The al-Quds Brigades affirm that their blood will remain a shining light for the mujahedin (warriors) towards the path of glory and dignity,” the statement read. “We will proceed with the path of resistance until the liberation of all beloved Palestine.”

Shortly after the ceasefire between Israel and the Gaza-based factions went into effect on Friday morning, PIJ General-Secretary Ziyad al-Nakhaleh and Hamas leader Ismail Haniyeh received separate phone calls from Hossein Salami, commander-in-chief of Iran’s Islamic Revolutionary Guard Corps, congratulating them on the “big victory” achieved by the Palestinians during the fighting.

Salami expressed Iran’s readiness to provide the Palestinian terrorist groups “with whatever help necessary in the field,” according to a statement by the Iranian Tasnim News Agency.

Speaking to Haniyeh, the Iranian military commander said that his country is ready “to provide all kinds of assistance to the Palestinian nation and resistance forces in all areas and it will spare no effort in this regard.”

During the call with the PIJ leader, Salami stressed that the Islamic Revolutionary Guards Corps “will never leave the Palestinian nation alone.”

In a speech on Friday, Haniyeh, who is based in Qatar, congratulated the Palestinians on the “great victory by the brave resistance.”

He said that “the Palestinian people everywhere proved to the whole world that al-Aqsa Mosque belongs to us and that Jerusalem is a red line. This victory is one phase in the conflict with the Zionist enemy.”

He added: “Thank God who has brought happiness to the hearts of our people, our nation, and the free people of the world. The Gaza Strip erupted to defend Jerusalem and al-Aqsa Mosque.”

Post Views: 92
Previous Touring Gaza, UN envoy presses both Israel, Hamas over ceasefire
Next Roaming Charges: Once Upon a Time in Palestine