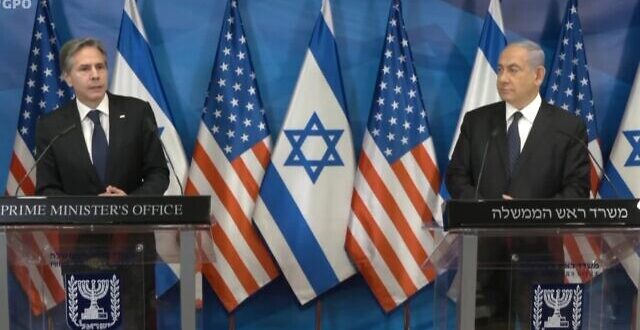 Speaking to the press in Jerusalem alongside Prime Minister Benjamin Netanyahu, US Secretary of State Antony Blinken says the US supports Israel’s right to self-defense and will also be heavily involved in and committed to rebuilding Gaza after the latest round of fighting — and to seeking a political solution to the conflict. “Leaders on both sides,” he says, need to take steps “to set a better course for their shared future.”

“President Biden asked me to come here today really for four reasons,” Blinken begins. “First, to demonstrate the commitment of the United States to Israel’s security; to start to work toward greater stability and reduced tensions in the West Bank and Jerusalem”; to support “urgent humanitarian reconstruction assistance in Gaza,” and to “continue to rebuild our relationship with the Palestinian people and the Palestinian Authority.”

After the intense diplomacy led by President Biden, together with Netanyahu, helped produce the ceasefire, “now we believe we must build on it,” he says. “Losses on both sides were profound,” and “as the Talmud teaches, to lose a life is to lose the whole world, whether that life is Palestinian or Israeli.”

He says the US fully supports Israel’s right to defend itself against attacks — “such as the 1000s of rockets fired by Hamas indiscriminately against Israeli civilians… For the president… this commitment is personal; it runs deep…

“We’ll continue to strengthen all aspects of our longstanding partnership, and that includes consulting closely with Israel, as we did today, on the ongoing negotiations in Vienna around a potential return to the Iran nuclear agreement, at the same time as we continue to work together to counter Iran’s destabilizing actions in the region.”

“We know that to prevent a return to violence we have to use the space created [by the ceasefire] to address a larger set of underlying issues and challenges, and that begins with tackling the grave humanitarian situation in Gaza, and starting to rebuild.” He says the US will announce a significant contribution to this effort later today and will work with its partners “to ensure that Hamas does not benefit from the reconstruction assistance.”

“At the same time, we need to work to expand opportunity for Palestinians in Gaza and in the West Bank, including by strengthening the private sector, expanding trade and investment, and other means. Assistance and investments like these will help foster a more stable environment that benefits Palestinians and also benefits Israelis.”

Blinken says he spoke with Netanyahu about “other steps that need to be taken by leaders on both sides to set a better course for their shared future.”

Quoting Biden, he says, “we believe that Palestinians and Israelis equally deserve to live safely and securely, to enjoy equal measures of freedom, opportunity and democracy, to be treated with dignity.”

Regarding the “intercommunal violence that erupted in Israel during the conflict, he says, “healing these wounds will take leadership at every level.” He says: We very much welcome the statements the prime minister made… condemning the attacks regardless of who they targeted.”

In the US, Blinken says, there has been a “shocking eruption of antisemitic attacks.” Again quoting Biden, he says they are despicable and must stop.

Overall he says, “there is a lot of hard work ahead to restore hope, respect and some trust across communities,” but that having seen the alternative, the need is for “all of us to redouble our efforts to preserve the peace and improve the lives of Israelis and Palestinians alike.”