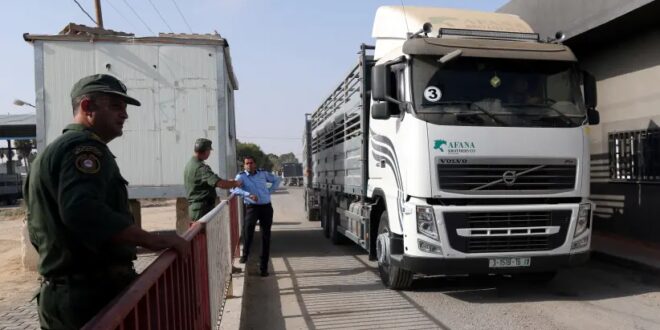 The IDF had confiscated the items in the days leading up to the 11-day IDF-Hamas war, which began on May 10.

Defense Minister Benny Gantz issued five military seizure orders against items Hamas had attempted to smuggle in and out of Gaza for its military wing, as the two Israeli crossings into Gaza — Kerem Shalom and Erez – remained closed.

The IDF had confiscated the items in the days leading up to the 11-day IDF-Hamas war, known as Operation Guardian of the Walls, which began on May 10. It has now issued official confiscation orders for the items.

This included a million shekels worth of gold that Hamas and other Gaza terror groups had smuggled into Judea and Samaria to finance terror activity in the West Bank. The gold, which in total weighed 13 kilograms, was shaped as nails and hidden within wooden pallets.

Other items seized included shipments of potassium chloride, glycerin, polyurethane, polyester, fiberglass and communications equipment. These were all considered dual use items, which means they have both a civilian and aa military purpose. The IDF has issued some 20 such seizure orders against terror designated items since the start of the year.

The military seizure orders were issued as the IDF is preparing to work with the United Nations, the United States and the European European to come up with a plan to rebuild Gaza in the aftermath of IDF retaliatory bombings for Hamas rocket fire.

According to the United Nations Office for the Coordination of Humanitarian Affairs (OCHA), Hamas launched 4,000 rockets against Israel, of which hundreds fell short and hit Gaza. The IDF also carried out 1,500 strikes on Gaza.

In a briefing with reporters on Sunday Gantz said that it would be impossible to completely prevent Hamas from confiscating some of the reconstruction material for military use.

“I’m not naïve; some of the materials we let in will go to Hamas,” Gantz said in a briefing. “In the end, it’s complicated. You need cement to build, and some of it goes to the terror tunnels.”

Gantz is expected to meet with Prime Minister Benjamin Netanyahu on Monday to discuss the problems associated with the entry of dual use items into Gaza.

In the interim the IDF has not announced a date by which the Kerem Shalom and Erez crossings will be opened. The former is the main artery for commercial goods into Gaza, while the later is for pedestrian transit.

The third crossing into Gaza, is at the Egyptian border at Rafah. But it is not designed for major commercial use.
The closure of the crossings means that a present goods and people can not get in and out of Gaza. Typically the crossings are closed in situation of hostilities and operate normal in period of calm.

For the ID-Hamas truce that went into effort on May 21 to hold for any meaningful period the crossings would have to reopen.

The left-wing organization Gisha — Legal Center for Freedom and Movement has called on Israel to open the crossings particularly for humanitarian goods.

“The closure is illegal, morally wrong and life threatening,” it stated.

Basic necessities such as food, medicine, medical equipment and fuel needed for Gaza electricity have all been prevented from entering, it stated.

Palestinians in need of medical treatment in Israel have also been prevented from leaving Gaza and those who received such treatment have not been able to go home, it explained.

The families of the Israelis held captive in Gaza have long held that Israel should prevent all humanitarian aid from entering Gaza unless the captives are released.

This includes Lt. Hadar Goldin and St.-Sgt. Oron Shaul, believed killed in the 2014 Gaza war, but whose remains have been held since then by Hamas. The terror group is also believed to hold captive two Israelis, who suffer from emotional illnesses and as a result wandered into Gaza. This includes Avera Mengistu who entered the Strip after the Gaza war in 2014 and Hisham al-Sayed who went there in 2015.

The campaign for the captives release has largely been conducted by the Goldin family.