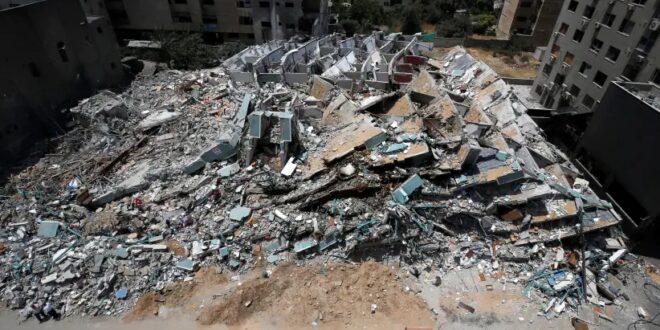 Iran helped push the war with Gaza but was concerned that Hamas and its other proxies would lose badly. Instead, they perceive a surprising victory.

The fuse lit by Hamas will become the “fire” for a new operation in the future, according to Iran’s Tasnim News Agency. The report, reflecting the Iranian regime’s thinking, details how Hamas won the recent war by not losing.

Indeed, Iran helped push this war, but it was concerned that Hamas and its other proxies in Gaza would lose badly. Instead, they see a surprising victory.

There are indicators to determine defeat or victory in war, the report said. Iran has weighed them and believes Hamas won. This matters because it means Iran and Hezbollah are not deterred in the next round against Israel.

We must begin at the starting point of the war to see the “achievements and failures that occur for each side during its days,” Tasnim wrote. The “aggressor” must achieve military goals to have victory, “otherwise, the side on which the war was imposed will win.”

The report admits “a reading of the recent war in occupied Palestine suggests that Palestinian groups fired rockets at Jerusalem to provoke the conflict.” But “the Palestinian resistance’s rocket attack on Zionist positions in occupied Jerusalem came after widespread aggression and the crimes of settlers and Zionist militants against Palestinians living in Jerusalem and worshipers at al-Aqsa Mosque. Even the resistance had set a deadline for the enemy before any military action to end the persecution of the Palestinians.”

What were the goals of both sides?

“As mentioned, the Palestinian resistance groups entered the war with the aim of defending the people of Jerusalem and the holy places and preventing the completion of the project of Judaization of this city, with a focus on the unity of all Palestinians,” the report said.

Important here is the unity of all Palestinians.

In fact, we know Israel only sought the second aspect.

What was the performance of the “resistance in achieving its goals in the 12-day war?”

Iran’s analysis is more interesting than those found in Western media and pro-Palestinian accounts. “First, we must evaluate the goals of the Palestinians and the degree of success in achieving them and the performance of these groups in the days of war,” Tasnim wrote.

Iran calls Israeli airstrikes hasty and that they caused Israel to lose support among global public opinion. But Hamas faced unprecedented precision attacks, the report said. Hamas rockets also led to “unprecedented fear and terror that had taken root in the hearts of the Zionist settlers following the rocket attacks on Israeli cities and towns,” Tasnim wrote.

This is not accurate.

The report also said Israel was “forced to resort to Arab and international mediators for a ceasefire by unofficially admitting their inability to continue the war. Despite the Zionist army’s boasting about a ground attack on Gaza, which turned out to be a major scandal for Israel in the media after it was revealed to be false, the Zionists did not dare to attack Gaza and relied only on their Air Force’s aggression.”

Iran now sees that the “striking achievement of the Palestinian resistance in this war was the unprecedented unity of all Palestinians throughout occupied Palestine and beyond. In the previous three Gaza wars in 2008-09, 2012 and 2014, the resistance entered the battle with the enemy solely for the purpose of defending Gaza and breaking the siege of the city, but this time it came out in support of the Palestinians living in Jerusalem,” Tasnim wrote.

This is important. It shows the regional and global context and thought and planning by Hamas. For a period, Hamas and Iran planned this war. After the Palestinian Authority postponed elections on April 29, war planning went into high gear.

Iran’s media reads Israeli media and relies on it for facts.

Activists from Fatah and Hamas clashed in Jerusalem on May 23 after the PA-affiliated mufti of Jerusalem was expelled from al-Aqsa Mosque.

“Since the lack of unity and division among the Palestinians is one of the biggest factors in the continuation of Zionist aggression and occupation in the Palestinian territories, the unity of the people of this land from Jerusalem to the West Bank and the Gaza Strip and refugee camps in other countries can pave the way for their liberation,” Tasnim wrote.
Hamas accepted the ceasefire without concessions, the report said.

“The military blow inflicted on the positions of the resistance and its commanders in this war was much less than expected,” it said.

Hamas won by not losing badly, the report said, adding: “The fire will start, and we will be exposed to another operation.”

Indeed, Iran and Hezbollah are currently plotting. They know that even under blockade, Hamas performed well for 12 days. “They kept Israel under fire,” Tasnim wrote.

Next, the report quoted Maj.-Gen. (ret.) Amos Yadlin and journalist Ron Ben-Yishai to say Israelis have been critical of the recent conflict. “Israel’s defeat in the military, media, social, intelligence and economic dimensions of this war is also discussed in detail,” Tasnim wrote.

Israel is the loser of this war because “despite having abundant military capabilities that are not comparable to the Palestinians, it could not prolong the war,” the report said. “They did not even dare to attack Gaza by land. Thus, [Israel] was eventually forced to accept the ceasefire unconditionally and at least save their positions in occupied Palestine from resistance missiles.”

The Palestinians achieve several things, according to Tasnim. First, “in this war, the Palestinians, unlike the previous three periods, targeted the entire occupied territories with their missile attacks,” it wrote, citing the continual fire on Tel Aviv.

Palestinians have “moved beyond a purely defensive position and, with a systematic strategy, focus on the enemy’s strategic goals, including economic infrastructure and critical positions,” the report said.

“In the early days of the war, the Palestinians unveiled several advanced missiles and drones,” Tasnim wrote. These include a new “Qassam” missile and new drones, as well as the Ayyash long-range rocket and the Badr-3 short-range rocket.

Drones are a major milestone for Hamas, and they are based on an Iranian design. Hamas increased the accuracy of its missiles, the report said.

The big victory was tapping into the support from abroad and mobilizing protests across the world, Tasnim wrote. It “put the Arab nations and all the free people of the world in a single position to defend the Palestinian nation and its cause,” it said.

Now, “public opinion and the countries that wanted to compromise with the enemy will retreat from this decision for at least a long time,” the report said.

That means the real victory may have been slowing down the process of normalization. Turkey and Iran are reaching out to Saudi Arabia to prevent normalization, for instance.

“In general, the fourth war in Gaza, despite the material and human damage and pain it inflicted on the Palestinians, proved a fact: While the hopes of reviving the Palestinian cause have recently been dashed by the treacherous stances of the compromising regimes [the Abraham Accords] and the Palestinian Authority, the realities of this war have shown that all Palestinians are ready to make any sacrifice to defend their cause and land and raise the flags of resistance in unison,” Tasnim wrote.

This is important because it means Iran’s real goal was to sabotage Israel-Gulf ties and isolate the PA. Hamas may be more popular now than when it first came to power in Gaza. “Hamas will be a definite winner if elections are held,” the report said.