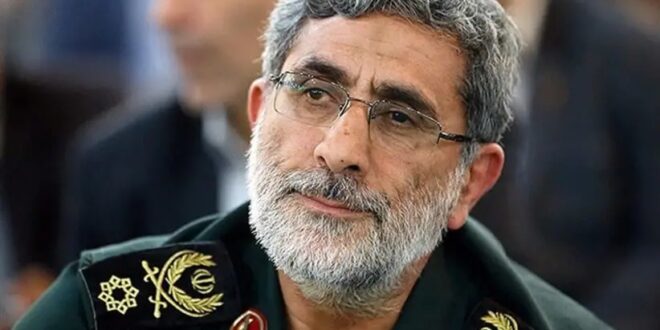 The comments made by Esmail Ghaani, the head of Iran’s Islamic Revolutionary Guard Corps Quds Force, praised death and martyrdom and said fighters welcome death with ‘longing and passion.’

His comments came after Hamas reportedly thanked Iran for its support in the war. Iran backs Hamas and Islamic Jihad, which has offices in Damascus.

Ajouri was reportedly targeted in an airstrike in Damascus in November 2019 during Israel-PIJ tensions.

Ghaani’s macabre letter praised death and martyrdom, adding that while the killing of pro-Iran operatives is a threat, they look forward to death with longing and passion, according to Al-Mayadeen, a Beirut-based pan-Arabist satellite television channel. Ghaani’s predecessor, Qasem Soleimani, was killed by the US in 2020 and is revered as a great martyr.

The letter to Ajouri, one of several letters and memos of support that have been sent from Iran to Hamas and PIJ recently, said: “We believe that every drop of blood that falls on the way to Jerusalem brings us closer to liberating it from the filth of the occupier.”

The support for PIJ includes more imagery about martyrdom and calls for Palestinians to be “steadfast.” It calls on “all the mujahideen in the land of Palestine. I kiss your striving hands, which God throws at his enemy, and which pave the way to making the clear conquest, God willing.”

This was similar to a message sent to Mohammed Deif, supreme commander of Izzadin al-Qassam, the so-called “military” wing of Hamas.

Clearly, Ghaani is trying to bolster the “resistance” axis and thank them for fighting Israel on Iran’s behalf. It appears that Iran timed this war to coincide with Quds Day on May 7, ordering Hamas to begin the battle on May 10.

It has put Palestinians and Hamas back on the agenda, with Hamas now being treated normally by international media, rather than as a terrorist group. Iran is pleased.

“We will offer everything we can to achieve the goal of liberating all of the Palestinian land,” he was quoted as saying.