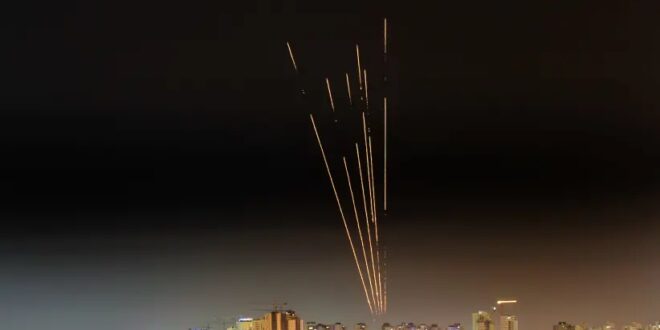 From air defense to ‘occupation’: The plan for endless war in Gaza

The occupation narrative is designed to press Israel into always having to take full responsibility for Gaza, which will always be “occupied” no matter what the Jewish state does.

In the wake of the recent Gaza war, several narratives have emerged that are preparing the ground for the next war and guarantee to give Hamas more legitimacy, even as it fires thousands of rockets at Israel’s cities.

The narratives include arguments that Israel’s Iron Dome somehow is perpetuating the conflict and that Israel continues to “occupy” Gaza, despite it being controlled by the Hamas terrorist group.

The twin theories present a recipe for endless war. On the one hand, there is a theory that Israel’s success in defending its civilians against rockets somehow reduces the threat the Jewish state feels from Hamas rockets. On the other hand, regardless of Israel’s actions, it is argued that it will always be “occupying” Gaza.

The occupation narrative is designed to press Israel into taking full responsibility for Gaza. Some commentators don’t even mention Hamas’s control of Gaza as a factor in the conflict.

Only Israel, upon leaving Gaza, is said to still be “occupying” it. This is not just because of Israel’s naval blockade off the coast. You can blockade something or interdict weapons flow and not be “occupying” it. Even though dozens of countries recognize “Palestine” as a country, Gaza is still “occupied.”

It stands to reason that Gaza will always be “occupied,” no matter what Israel does. Israel can’t recognize Hamas-run Gaza as a state, because then it will be accused of doing what South Africa did by recognizing a “Bantustan.” It doesn’t even matter if Israel recognizes the Palestinian Authority as a state, since the PA doesn’t control Gaza.

The “occupation” argument is designed to give Hamas a “right to resist” occupation. This creates a Catch-22 situation.

srael left Gaza, but Israel is said to “occupy” it so that people can excuse terrorism against Israel from the coastal enclave. Then Israel has to blockade it, and the blockade is used as further evidence of “occupation.”

UNRWA’s Gaza director, Matthais Schmale, hinted at some of the Catch-22 aspects of these narratives in a series of tweets. He began a thread of tweets because of recent comments he made on Israeli TV that had been slammed. On Tuesday, he made several key arguments about the recent conflict in Gaza.

“Military precision and sophistication are never a justification for war,” he wrote. “Many people were killed or have been severely injured by direct strikes or collateral damage from strikes. In a place as densely populated as Gaza, any strike will have huge damaging effects on people and buildings.”

“The terror from the sky that we have just experienced amounts to a form of collective punishment of the civilian population,” Schmale wrote. “This must never happen again… Wrong to reduce Gaza situation to humanitarian crisis… crucial to put this brutal conflict in context of 14 years of blockade, succession of conflict, Great Marches of Return and devastating COVID impact… the blockade must be lifted and a meaningful political process must resume to lead to a just solution.”

He said he fully agreed with a tweet accusing Israel of a “brutal colonial occupation… in that the context in Gaza does not start with the blockade 14 years ago but with the Nakba more than seven decades ago. And Israel must be held fully accountable for all its brutal measures against Palestinians.”

Yet just days before, he said his impression was that Israel was very sophisticated in the way it carried out airstrikes in Gaza, and with few exceptions, it avoided civilian targets.

As for Hamas, “You cannot work in a place like Gaza without coordinating with the local authorities,” he said. “That’s true for any autocratic regime of this nature.”

The narrative here purposely ignores Hamas, not even using the word “Hamas.” It presents the “problem” as the “Nakba,” which means it presents Israel’s existence as the problem. Agreeing with the term “colonial” in relation to Israel indicates this as well.

While the argument denies any justification for war, there is no mention of the 4,000 rockets Hamas launched, because that is apparently not called a war. When Hamas attacks Israel, it is not a “war.” But when Israel responds with airstrikes, it is “war” and “collective punishment.”

THESE NARRATIVES essentially create a recipe for endless conflict, not an end to conflict.

Israel’s Iron Dome is said to be a problem because it doesn’t force Israel to deal with Gaza politically. But how would Israel have dealt with Gaza without Iron Dome amid the launching of thousands of rockets? It would have been compelled to invade the Gaza Strip.

This appears to be the real goal of those who object to the Iron Dome air-defense system and who claim Gaza is under Israeli occupation. No more airstrikes, only ground control by Israel of Gaza as was the case before 2005, is acceptable.
It’s unclear why those who agitate for an end to “occupation” also want more occupation, unless the overall agenda is not only endless conflict but also the one-state solution now being advocated by some.

Recent reports by Human Rights Watch and B’Tselem have tried to paint all of Israel, Gaza, Jerusalem and the West Bank as part of the same territory, essentially looking at it as one state. Paired with terms like “colonial” and dismantling the Iron Dome, the aim seems to be to force Israel to reoccupy Gaza and that the end goal is war until Israel ceases to exist.

The idea that the Jewish state has to coexist with a radical Islamist group like Hamas, which fires thousands of rockets at airports and civilians in cities, is part of the agenda here. Some have even argued during this last confrontation that Hamas was justified in targeting Tel Aviv because it contains Israeli military buildings.

In essence, this argument says Hamas can fire rockets at millions of people if there are a few buildings used by the IDF. But Israel cannot harm any civilians in targeted airstrikes in Gaza; in fact, the airstrikes themselves are condemned as “collective” attacks.

This essentially is an argument that says Israel must not have any air defense; Gaza must not be blockaded, so Iranian missiles can flow to Hamas; Hamas has a “right to resist occupation” and can fire rockets anywhere in Israel at Israeli civilians; and Israel must not carry out any “war” or retaliatory airstrikes against Hamas in Gaza to stop it.

There is no conclusion based on that logic that does not involve endless war. This is because the argument doesn’t demand that Hamas stop the rocket fire, nor does it put any onus on the terrorist group governing Gaza.

It appears that these arguments are designed to justify more Hamas attacks based on various excuses and to consider any Israeli retaliation as “illegal,” “occupation” and “war.”

There is no evidence that this paradigm, suggesting endless war, will lead to peace.