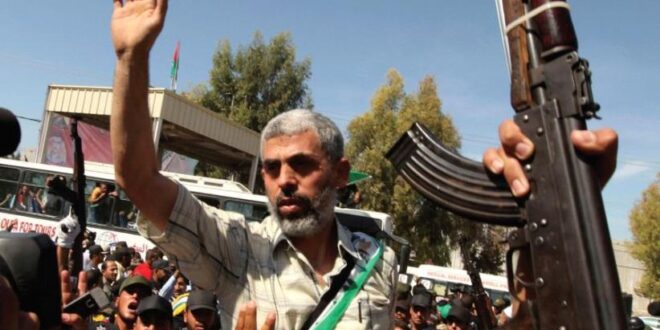 Hamas’s Sinwar: We have 500 km of tunnels in Gaza, only 5% were damaged

“We are ready for the great battle, if the enemy commits a great folly in Jerusalem and the holy sites,” Sinwar said in his first speech since Operation Guardian of the Walls.

Gaza’s Hamas leader Yahya Sinwar claimed on Wednesday that Hamas has 500 km. of tunnels in the Gaza Strip and that only five percent of the tunnels had been damaged in recent clashes.

In his first speech since Operation Guardian of the Walls ended, Sinwar also warned that the Islamic terror group has 10,000 “martyrs” inside Israel who are “ready to respond” if Jerusalem is harmed.

“In the coming period, we will carry out an advanced popular resistance, whose back will be protected by military resistance,” he added.

Sinwar added that shortly before the ceasefire came into effect, Hamas had planned to fire 300 rockets at once, with 150 being directed at Tel Aviv, but decided not to out of respect for the Egyptian and Qatari mediators. Sinwar claimed that Hamas has the ability to launch hundreds of rockets per minute, with a range of 100-200 km.

The Hamas leader stressed that the ceasefire with Israel is unconditional and that no agreement had been signed by either side.

Despite reports that Israeli strikes destroyed much of the Hamas tunnel network (known as the “Metro”), Sinwar claimed that the Islamic terrorist movement has over 500 km. of tunnels in Gaza and that not even 5% of the tunnels were impacted by the strikes. Sinwar added that the damaged sections would be repaired within a few days.

The entire Gaza Strip has an area of 365 square kilometers, which would mean that the tunnel systems must cover most of the coastal enclave, if Sinwar’s claims are true. (Sinwar’s claim would make Hamas’s metro 100 km. longer than the entire London underground tunnel system. In Gaza’s more limited area, it could run 10 parallel lines north to south and another eight tunnels connecting them running east to west.) The IDF reported that it destroyed over 100 km. of Hamas tunnels during Operation Guardian of the Walls.

“The occupation has failed to destroy the Hamas metro,” said Sinwar. “The occupation did not achieve anything from its plans to deter the resistance, and it failed to assess the situation due to our preparations.”

Sinwar denied reports that Israel had succeeded in tricking Gaza terrorist groups into thinking it was about to launch a ground invasion in order to drive them into tunnels, claiming that Hamas’s intelligence is “familiar with the enemy’s plans and knew that there would be no ground invasion.”

He stressed that al-Aqsa and Jerusalem are a “redline” and warned that the operation was just a “small maneuver” compared to what will happen if Israel tries to “harm al-Aqsa Mosque.”

“We are ready for the great battle, if the enemy commits a great folly in Jerusalem and the holy sites,” said Sinwar. “We wanted to deliver a message to the occupation and the world that we do not make threats haphazardly, so that the world knows that al-Aqsa has men who protect it.”

Sinwar urged the residents of the Sheikh Jarrah and Silwan neighborhoods who are facing eviction to “be steadfast,” adding that Gaza’s Islamists will back them up.

Concerning reports of a prisoner exchange deal, Sinwar stated that there were discussions on the matter, but that political instability in Israel prevented them from progressing.

Addressing concerns by international donors that humanitarian aid funds were being misused by Hamas’s military wing, Sinwar claimed that Hamas and the Izzadin al-Qassam Brigades had their own funds and did not need any of the funds provided for reconstruction of the Gaza Strip. Sinwar thanked Iran for supporting Hamas with money, weapons and expertise.

Sinwar warned that Hamas will “burn everything” if the problems of Gaza are not solved.

Speaking a day after Hezbollah leader Hassan Nasrallah delivered a speech in which he stated that even friends of Gaza were “surprised” by the rocket barrage on Jerusalem, Sinwar stressed that Hamas was in “constant contact” with Hezbollah during the conflict and that there was a “high level of coordination.”

Sinwar added that Hamas is “confident” that other groups in other countries would have joined the conflict if it had escalated any further.
A number of rockets were fired from Lebanon toward Israel during the conflict, but it is unclear who exactly fired them.