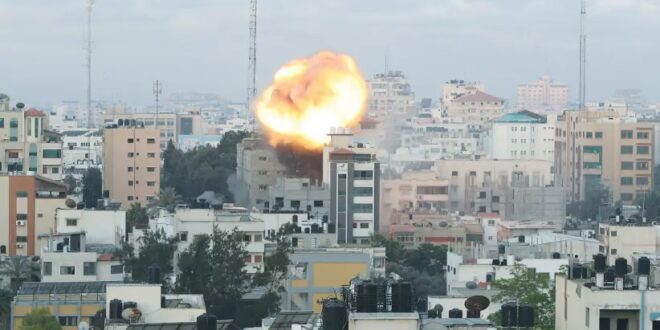 Pakistan and the Palestinian Authority submitted a resolution on the creation of a fact-finding mission that will be voted on Thursday when the UNHRC holds a special session on the matter in Geneva.

The United Nations Human Rights Council is expected to establish a commission of inquiry into Israeli actions against Palestinians during the period leading up to and including the 11-day Gaza War that ended on May 21.

The fact-finding committee of judicial experts would investigate Israeli activity in Gaza and Jerusalem as well as the ethnic riots that broke out in mixed cities within sovereign Israel. It would start to probe activity from April 13, 2021, but there is no end date for the investigation, which according to the latest draft of its mandate would be “ongoing.”
Pakistan and the Palestinian Authority submitted a resolution for the creation of the fact-finding mission, which will come to a vote on Thursday, when the UNHRC will hold a special session in Geneva. It is expected to receive the majority vote in the 47-member body.

Thursday’s debate will begin at 10 a.m. Geneva time and is expected to be a protracted day-long event that will involve Israel and Palestinian participation, as well as UN officials, human rights activists and representatives from dozens of countries.

“Tomorrow, Israel will present the facts on the ground. We call on member states of the HRC to assume their moral responsibility and oppose the resolution,” said Israel’s Ambassador to the UN in Geneva Meirav Eilon Shahar.

The UNHRC debate is one of three focusing on Israel at the UN within a 48-hour period. In Geneva on Wednesday, the 74th general assembly of the World Health Organization passed a resolution against Israel’s treatment of Palestinians. On Thursday in New York, Israel will also find itself on the defensive when the United Nations Security Council holds its monthly meeting on the Israeli-Palestinian conflict.

The UNSC also held a special session on condemning Israel earlier this month in the middle of the Gaza war, known in Israel as Operation Guardian of the Walls, and issued a statement calling for a ceasefire.

That statement did not mention Hamas, the more than 4,000 rockets it launched at Israel during the war, or the ten people within Israel who died as a result, including two children. It did not speak of the Hamas militants who were killed by the IDF or of the Palestinian civilians killed when Hamas rockets fell short.

In a letter to the UN Security Council in advance of the meeting, Palestinian Authority Ambassador to the UN in New York Riyad Mansour spoke of the harm the Gaza war and the accompanying violence in Jerusalem had caused, stating that 250 Palestinians had been killed in a two-week period.

“This is not just a number. These were human lives and families have been devastated and forever traumatized and our society so deeply harmed and scarred,” he said.

“Carrying on as though this is normal is not possible. Accountability must be pursued to ensure justice, including justice for the many, many victims of this illegal occupation’s heinous crimes against our people,” he said.

The UNSC is not expected to take any action when it meets on Thursday.

In Geneva, however, the UNHRC at its special session will vote Thursday on a resolution for a fact-finding mission that will similarly not speak of Hamas or the rockets.

Shahar said that the “convening of this Special Session has no bearing on the reality on the ground and has no intention of looking at any party to the conflict apart from Israel. Hamas is not mentioned in the resolution.

“The 4300+ rockets indiscriminately launched at Israeli civilians are not mentioned. The bombing by Hamas of humanitarian aid convoys is not mentioned,” she said.

Instead, the resolution reminds member states of their responsibility to band together to halt Israeli actions.

The commission would “make recommendations, in particular on accountability measures, all with a view to avoiding and ending impunity and ensuring legal accountability – including individual criminal and command responsibility – for such violations, and justice for victims,” the resolution states.

It would explore the “alleged violations of international humanitarian law and all alleged violations and abuses of international human rights law leading up to and since 13 April 2021, and all underlying root causes of recurrent tensions, instability and protraction of conflict, including systematic discrimination and repression based on national, ethnic, racial or religious identity,” the resolution states.

Shahar charged that the “sole purpose of this Special Session and its resolution is to blame Israel, whitewash the crimes committed by Hamas, and for the PA to avoid assuming its responsibilities towards its own population.

“Israel fights Hamas terrorism, not the Palestinian people, nor the population in Gaza,” she said. “Unfortunately, this Special Session will only reward Hamas and extremist forces, pushing further away any prospects of trust building and peace.”

Among those who will be speaking at the UNHRC session will be High Commissioner for Human Rights Michelle Bachelet; the special rapporteur for the Palestinian territories, former MK Mohammad Barakeh; Al-Mezan Center for Human Rights director Issam Younis; and Muna El Kurd, a journalist who lives in Sheikh Jarrah.

There have been at least five fact-finding missions into Israeli military actions in the past, including one on the Hamas-led “Great March of Return” as well as on past Gaza wars.

ON WEDNESDAY the UN’s World Health Organization voted on a resolution in support of better health care for the Palestinians in east Jerusalem, the West Bank and Gaza, as well as for Syrians on Israel’s Golan Heights, even though those Syrians have equitable access to Israeli health care.

The text of the resolution itself did not mention Israel, but the criticism was implied. The country has been under fire on the international stage for providing vaccines to its citizens while not similarly purchasing vaccines for the Palestinian Authority so it could provide for those living in Areas A and B of the West Bank, which is under PA rule.

UN Watch’s executive director Hillel Neuer said, “Today’s assault on Israel at the WHO promoted the lie that Israel is harming Palestinian health rights,” but adding that “the opposite is true.”

“Despite the fact that the Palestinians have their own health system, and under the Oslo II Peace Accords, it is the Palestinian Authority which is responsible for vaccinating their population, Israel has vaccinated over 100,000 Palestinian workers since March as well as donating thousands of vaccine doses for Palestinian medical workers,” Neuer said.

“Israeli medical teams coordinated with Palestinian medical professionals to provide training and assistance,” he said. “Israel transferred medical equipment and has trained dozens of Palestinian doctors, nurses and medical personnel from Gaza before the Palestinian Authority ceased coordination in May 2020, putting more pressure on their health care system during a pandemic.

“Moreover, it’s particularly absurd for the WHO to enact a resolution effectively accusing Israel of violating the health rights of Syrians in the Golan, while the director-general’s report clearly states that they have full access to universal health care under the Israeli health maintenance organizations, including COVID testing, medical care, contact tracing and vaccination,” he said.

Post Views: 68
Previous Hamas’s Sinwar: We have 500 km of tunnels in Gaza, only 5% were damaged
Next IDF: Nasrallah tried to threaten Israel, looked weak and sick instead