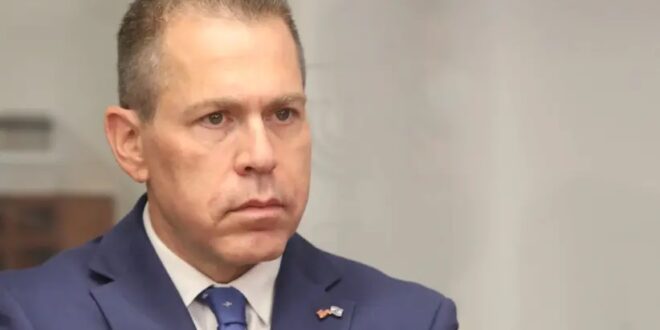 Erdan complains to UNSC about Hezbollah rockets during Gaza conflict

Gilad Erdan pointed out that during the 11 days of Operation Guardian of the Walls, Israel was repeatedly attacked from its north, including three rockets and two unmanned aerial vehicles from Syria.

Israel will act to protect its citizens from Hezbollah if it needs to, Ambassador to the UN Gilad Erdan warned on Thursday in an official complaint letter to the UN Security Council.

Erdan pointed out that during the 11 days of Operation Guardian of the Walls, Israel was repeatedly attacked from its north, including three rockets and two unmanned aerial vehicles from Syria, as well as increased attacks and rioting by the Israel-Lebanon border, destruction of infrastructure near the Blue Line, setting an Israeli nature reserve on fire, and others. Senior Hezbollah officials publicly took responsibility for some of the attacks.

“The gravity and volume of these incidents is unprecedented as compared to recent years, and they constitute grave violations of Israel’s sovereignty,” Erdan wrote. “The abovementioned violations are a proof of ongoing military entrenchment and presence of Hezbollah and other armed groups in Lebanon, throughout the UNIFIL area of operation and beyond.

“Hezbollah’s continued military buildup and malign activities, particularly during times of tension, have the potential to fuel and spread the flames of conflict, potentially leading to grave consequences in our region,” he stated.

Though Israel is not interested in an escalation and respond with restraint, Erdan said, Israel “will take all necessary measures to protect its citizens.”

Erdan called on the UNSC to condemn the violations and demand that UNIFIL and Lebanon take actions to stop Hezbollah from attacking, in adherence with UNSC Resolution 1701 marking the end of the Second Lebanon War.
UNIFIL, the UN Interim Force in Lebanon, posted in Southern Lebanon, is supposed to maintain the ceasefire between Israel and Lebanon.

Erdan said he expects UNIFIL to do its job and “act decisively to prevent the recurrence of these violations and to actively ensure that UNIFIL’s area of operations…is not utilized for hostile activities and attacks against Israel.”

“The fact that rockets were fired from southern Lebanon is a clear evidence of the existence of unauthorized weapons in South Lebanon and confirmation of Israel’s repeated claims concerning this matter,” Erdan added.