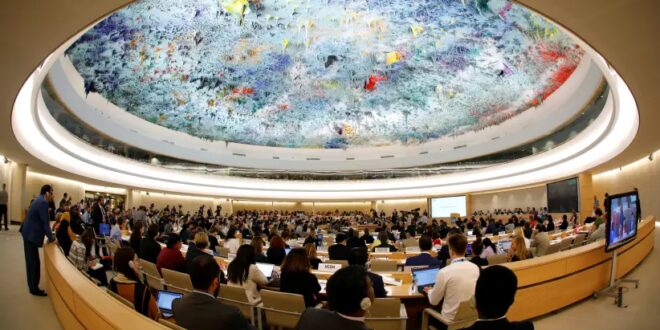 Following Operation Guardian of the Walls against Gaza terrorist groups, for the first time ever the UNHRC has created a permanent fact-finding mission regarding a UN member state.

The United Nations Human Rights Council voted 24-9 Thursday to launch an investigation against Israel for alleged war crimes, including during the recent war against Hamas in the Gaza Strip, and called for an arms embargo against the Jewish state.

An additional 14 countries out of the 47-member body abstained. None of the European Union countries supported the measure.

It marks the first time that the UNHRC created a permanent fact-finding mission with respect to any UN member state. Israel’s Foreign Ministry immediately stated that it had no intention of cooperating with the probe.

“Once again, an immoral automatic majority at the Council whitewashes a genocidal terrorist organization that deliberately targets Israeli civilians while turning Gaza’s civilians into human shields.

“This while depicting as the ‘guilty party’ a democracy acting legitimately to protect its citizens from thousands of indiscriminate rocket attacks. This travesty makes a mockery of international law and encourages terrorists worldwide,” he said.

The “commission of inquiry” would examine incidents that occurred both before and after April 13, 2021 within sovereign Israel, including Jerusalem, as well as in the West Bank and the Gaza Strip.

The decision to call for such a probe was sparked by the 11-day IDF-Hamas war and was submitted by the Palestinian Authority and Pakistan on behalf of the Organization of Islamic Cooperation.

The UNHRC already calls annually for an arms embargo against Israel. Its insertion is in addition to that annual text.
This new text “urges all States to refrain from transferring arms when they assess, in accordance with applicable national procedures and international obligations and standards, that there is a clear risk that such arms might be used in the commission or facilitation of serious violations or abuses of international human rights law or serious violations of international humanitarian law.”

The actual resolution does not mention Israel or Hamas and instead speaks of those who violate international law, such that the commission of inquiry could decide to investigate both Israeli and Palestinian sides.

But the language in the resolution as well as the speeches that were given at the UNHRC, plus the fact that it was filed by the Palestinians makes it clear that the intent was to focus on Israel.

The United States said it was “deeply unfortunate” that the vote occurred “while we and others have been working to uphold and strengthen the ceasefire, ensure humanitarian assistance to Gaza.” It’s Geneva mission added that creation of a probe “threatens to imperil the progress that has been made in recent weeks… We will continue to advocate for Israel to be treated fairly in the Human Rights Council.”

Germany took issue with an “indefinite” commission of inquiry that would “far exceed” any past fact-finding probes.
The UNHRC began its special session at 10 a.m. Geneva time, where it met, and ended over eight hours later. Dozens of envoys took the floor. The United States is not a member of the UNHRC, but it is engaged as an observer. Yet it was absent from the proceedings.

Israel’s Ambassador to the UN in Geneva Meirav Eilon Shahar warned the council against making a moral equivalence between Israel and Hamas, noting that three days prior to the start of the Gaza war one of its leaders called to cut off the heads of Jews.

“On May 7th, a senior Hamas leader, Fathi Hammad, said and I quote “cut off the heads of the Jews with knives.” Just three days later, Hamas, a racist, genocidal terrorist organization launched an unprovoked, unjustified attack against the civilian population in Israel, while cynically hiding military infrastructure in the midst of Gaza’s civilian population. This constitutes a double war crime,” Eilon Shahar said.

“We will make no apologies for defending our citizens. Israel has the capabilities to defend its people in accordance with international law and we will continue to do so,” she said.

Earlier in the day, she said, those who support the Palestinians should condemn Hamas.

UNHRC “member states must decide today. You have to decide! Are you pro-Palestinian or pro-Hamas? You cannot be both,” Shahar said.

Palestinian Authority Ambassador to the UN in Geneva Ibrahim Khraishi said that he rejected the idea that Israel had a right to defense, but Palestinians do not.

“We reject the statement that Israel has a right to legitimate defense where as Palestinians have no rights,” Khraishi said.

How is it, he wanted to know, that “Israel has the right to legitimate defense, whereas no one is referring to the rights of Palestinians who are suffering from the brunt of occupation over many years.”

“Events of the last week have sent a message to the world that Palestinians are under attack,” he said.

During the debate Bachelet agreed that Hamas caused deaths and injuries in southern Israel and that its “rockets are indiscriminate and fail to distinguish between military and civilian objects, and their use, thereby, constitutes a clear violation of international humanitarian law.” Such violations include Hamas’s launching of the rockets from civilian areas, she said.

“However, the actions of one party do not absolve the other from its obligations under international law,” Bachelet explained, nor did she accuse Hamas of potential war crimes.

Bachelet cast doubt on Israel’s claim that the buildings it destroyed in Gaza were Hamas targets, explaining that “we have not seen evidence in this regard.”

She added, “there is no doubt that Israel has the right to defend its citizens and residents. However, Palestinians have rights too. The same rights.”

Post Views: 91
Previous US Expected to Move Only Aircraft Carrier in Asia-Pacific Region to Middle East
Next Erdan complains to UNSC about Hezbollah rockets during Gaza conflict