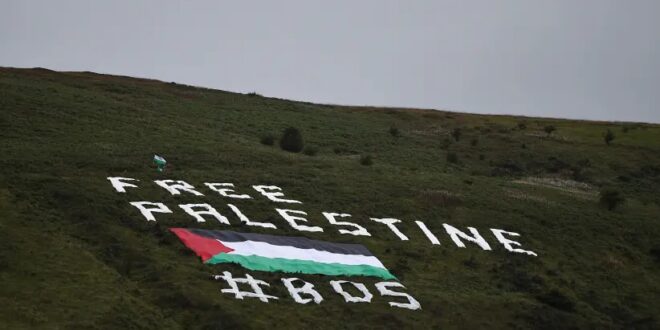 Ireland’s parliament unanimously approved a resolution condemning “de facto annexation” in the West Bank with government support on Wednesday night, while voting down a motion to expel Israel’s ambassador.

The Irish parliament unanimously approved a resolution condemning Israeli “de facto annexation” in the West Bank with government support on Wednesday night. It rejected a motion to expel Israel’s ambassador.

The motion against Jewish communities in Judea and Samaria was an initiative of opposition party Sinn Féin, which has long taken an anti-Israel position. But it also had the support of the government.

“This is not something that I or, in my view, this house says lightly… But it reflects the huge concern we have about the intent of the actions and, of course, their impact,” he told the Irish parliament on Tuesday.

“The scale, pace and strategic nature of Israel’s actions on settlement expansion and the intent behind it have brought us to a point where we need to be honest about what is actually happening on the ground,” Coveney said. “It is de facto annexation.”

Successive Irish governments have long been highly critical of Israel and have taken a leading role in the EU to press for harsher responses to what they claim are Israeli abuses.

EU foreign policy is set by consensus, and proposals by Ireland, Luxembourg, Belgium, Sweden and others for sanctions are always vetoed by member states that are friendlier to Israel.

During the debate on the motion, MP Patricia Ryan compared the events in Gaza to the Holocaust, and MP Brid Smith said charges of antisemitism were false, at a time when there was a 500% spike in antisemitic attacks in the UK, the Ireland-Israel Alliance said.

“Israel has annexed de facto the land in the West Bank on which settlements are built” and is guilty of “flagrant violations of international law,” the resolution says.

At Coveney’s request, the motion was amended to say that the legislature “condemns the violent acts of Hamas and other militant groups, including the firing of rockets and incendiary devices from Gaza into Israel.”

The amendment also condemned the “indefensible response of Israel bombing civilians and essential infrastructure in the Gaza Strip.”

Sinn Féin voted against the amendment.

The IDF struck Gaza more than 1,000 times during Operation Guardian of the Walls, mostly in pinpoint strikes targeting terrorist infrastructure.

The strikes killed about 60 civilians. Most of the casualties in Gaza were Hamas terrorists. Many of the casualties, including to children, were caused by rockets fired by terrorists that did not reach Israel but instead landed in the Gaza Strip.

The Foreign Ministry said it “outright rejects Ireland’s outrageous and baseless position regarding Israeli communities in Judea and Samaria” and that Ireland is granting “a victory for extremist Palestinian factions.”

It was “unacceptable” to make “anti-Israel statements… at a time when the citizens of Israel were being subject to terror attacks by the more than 4,000 rockets that were launched from the Gaza Strip by the Hamas terrorist organization,” the ministry said.

Ireland-Israel Alliance executive director Jackie Goodall said the motion means “Ireland looks set to adopt a position that removes [it] as a potential peace broker in the Middle East and removes any pretense of the Irish state [not] being overtly hostile to the Jewish state.”

“It was especially sad to see many [lawmakers] who profess to be friends of Israel abandon Israel,” she said. “No one spoke out to defend Israel. Some mentioned wishes for peace, but all came down on one side – against the State of Israel.”

“It seems that the political powers that be in Ireland are determined to solidify Ireland’s status as the most anti-Israel Western nation,” Goodall said. “Israel and the Israeli people can still count on many friends and allies amongst the Irish people, but few amongst its leaders.”

The Dáil, the lower house of parliament, also voted down a motion by the People Before Profit (PBP) Party to expel Israel’s ambassador, 86-46. The motions are nonbinding.

The motion accused Israel of war crimes, ethnic cleansing and illegal settlement expansion. “The Israeli ambassador’s presence in Ireland is untenable in these circumstances,” it said.

This was only the first attempt to expel the Israeli ambassador, Smith, a PBP lawmaker, tweeted.

“We will return to this until there is justice for Palestine,” she wrote. “Shame on those claiming to be friends of Palestine who voted against.”

Within Ireland’s governing coalition, the Greens had asked for freedom to be able to vote in favor of the motion, but they were denied.

Following Wednesday’s vote, the Greens said they would seek to promote the occupied territories bill, which calls for heavy fines on the sale of products from the West Bank, Golan Heights and east Jerusalem.

The bill has repeatedly been advanced in the Dáil and Seanad (Senate), but it never became law on the grounds that it would contravene EU trade laws.