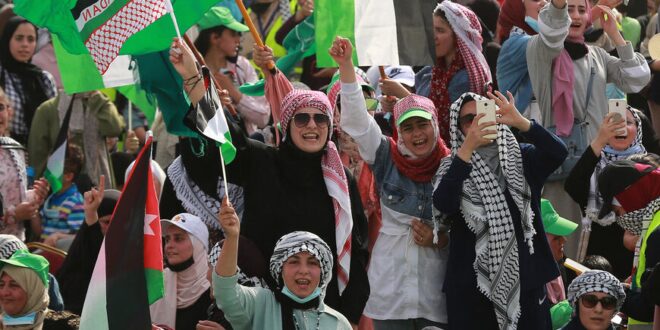 Jordanian authorities have appeared more lenient toward the recent protests that erupted across the kingdom in support of Palestinians.

Amid the 11-day conflict that pitted Israel on the one hand and Hamas and the Islamic Jihad on the other, Jordanians took to the streets, organizing protests and sit-ins across the kingdom in support of the Palestinians.

Protesters even attempted to cross the border toward Palestine but the armed forces intervened to stop them. However, there were reports indicating that two Jordanians crossed the border carrying knives and that Israeli security forces arrested the pair May 16; the Jordanian Ministry of Foreign Affairs and Expatriate Affairs is said to be working for their release.

The angry protesters demanded the expulsion of the Israeli ambassador from Jordan and chanted slogans against the Israeli occupation of the Palestinian territories, denouncing the aggression on the Gaza Strip and violations in Al-Aqsa Mosque and other parts of Jerusalem. They also demanded the opening of the Israeli-Jordanian border and the abolishment of Jordan’s peace treaty and natural gas agreement with Israel.

The series of protests, their momentum and the security leniency toward them have formed a new trend in terms of how the kingdom deals with sit-ins and protests against Israel. These protests are the most important in terms of magnitude and demands involving Israel since the signing of the peace treaty with Israel on Oct. 26, 1994. Observers and analysts were particularly intrigued by how Jordanian security dealt with the so-called Friday March on May 14 in the Karama area in the southern Jordan Valley, a few kilometers from the borders with Israel and the West Bank.

It appears the Jordanian government deliberately tolerated protests for at least four reasons. The first was to vent the tensions in the Jordanian street, especially those brought about by the COVID-19 pandemic.

A second reason was to spite Israeli Prime Minister Benjamin Netanyahu, pressure him and embarrass him before Israeli public and global public opinion. This is because of his bad relationship with Jordan due to his long-standing policies of not respecting the provisions of the peace treaty and disregarding Jordan’s interests and role in protecting Islamic sanctities in Jerusalem.

A third reason was to revive the role of Jordan and King Abdullah II, specifically in Jerusalem and in terms of protecting Islamic holy sites.

A fourth reason was so that the government could regain popularity it has lost from its citizens. Jordanians have lost confidence in their government lately, especially due to how it handled employment policy and the pandemic, according to a public opinion poll conducted by Rased Jordan on the government’s performance between April 10 and April 15.

Walid Abdulhay, a former professor of future studies and international relations at Yarmouk University in Jordan, told Al-Monitor, “Jordan was lenient with the recent popular movements because it is a main party involved in the two most important factors behind these events: the Israeli displacement of the residents of the Sheikh Jarrah neighborhood [in Jerusalem] and the Israeli raids against Al-Aqsa Mosque.”

Jordan is the custodian of Islamic holy places in Jerusalem. It also signed an agreement with the UN Relief and Works Agency (UNRWA) in 1954 whereby UNRWA financed the construction of housing units for Palestinian families living in the Sheikh Jarrah neighborhood in exchange for the families’ relinquishing their rights as refugees.

Abdulhay said Jordan likely wants to avoid antagonizing the Muslim Brotherhood, “which is close to Hamas, in light of the internal political tensions that erupted in early April, following a dispute with Prince Hamzah bin Hussein, the half-brother of King Abdullah II. In an unprecedented move, Jordanian authorities accused Prince Hamzah of plotting against the throne.”

Yousef Rbabah, a researcher and academic at Philadelphia University in Jerash, Jordan, told Al-Monitor, “The government’s leniency [toward the protests] was not a general approach, indicating that there are different trends within state institutions. Those who showed leniency aimed on the one hand to create a state of harmony between state institutions and the popular position, and on the other hand to pressure influential countries and alert them to the seriousness of the situation and that what Israel is doing may threaten regional security.”

William Christou, an Al-Monitor contributor and news editor at Al Jazeera Media Network in Doha, Qatar, told Al-Monitor, “Amman cannot stop these protests because the Jordanian public is angry at the scenes of destruction and bloodshed in Gaza. The government does not want this anger to be directed at it, especially after a year in which Jordan witnessed two massive waves of protests and popular tension. First, the teachers union demonstrations and the protests against Salt Hospital on March 13 following administrative negligence that led to the death of seven COVID-19 patients due to lack of oxygen. Second, the Prince Hamzah crisis and the popular tension it left behind, both of which negatively affected the popularity of the government and the royal family.”

Christou added, “I do not believe that these protests affect Jordan’s relations with Israel at all. It is known that the peace treaty with Israel is not very popular in Jordan. Amman has fulfilled its duty to protect the [Israeli] embassy and the borders of Palestine. At the same time, Amman has not taken any drastic measures such as expelling the Israeli ambassador, abolishing the peace treaty or restoring ties with Hamas. Instead, it is doing what it usually does, which is engaging in quiet diplomacy behind the scenes with other regional powers such as Egypt and France. This should not come as a surprise or an inconvenience to Israel.”

However, Rbabah said he believes that Jordan “has two cards to play to exert pressure on Israel: the peace treaty and security. Perhaps the fact that protesters made it to the borders aimed to convey a clear warning, especially since Israel is known for its concerns about border security. Meanwhile, Jordan has contact with many Palestinian parties [such as the PLO] that are able to disturb Israel’s comfort, at least by tampering with security, internally and externally.”

Abdulhay said, “All this is proof that the government’s approach was different this time. The beginning of the current events focused on two central issues, namely the displacement of the residents of the Sheikh Jarrah neighborhood. Jordan was a party to the talks about the [planned evictions] and the Jordanian Foreign Ministry said [April 21] that it had provided the Palestinian Authority with documents proving the residents’ ownership of their homes [under the agreement with UNRWA]. This means that Jordan is a party to the conflict because it is a party to the agreement. The second issue is the raids in Al-Aqsa Mosque courtyards, and since the 1994 Jordanian-Israeli Peace Treaty recognized Jordan’s custodianship over these places,” Jordan sees not cracking down on the protests inside the kingdom against Israel as a way to defend this right.

Christou said the essence of the difference in the new approach is that “one of the areas in which King Abdullah II maintained his popularity is the defense of Palestine and Jerusalem in particular. The king’s refusal to accept the [2020 US Mideast peace plan known as] ‘deal of the century’ and standing firm by Jordan’s guardianship of Al-Aqsa is a source of pride for Jordanians. Coming across as defending the Israelis would have seemed like a political miscalculation on the king’s part.”

Post Views: 113
Previous Israel sets conditions for talks with Palestinians via Egypt
Next Palestinian Politics Are More Divided Than Ever